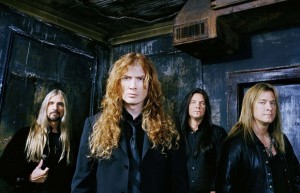 Yes, if you needed any more evidence that the Mumfordization of music has reached every single God forsaken corner of popular music world, now Dave Mustaine and his heavy metal legacy band Megadeth are browsing through Guitar Center catalogs looking for “guitjos” and releasing a supposed “bluegrass-inspired” track on their latest album Super Collider. It’s called, get this, “The Blackest Crow.” Because what’s more \m/ *METAL* \m/ then the most blackiest crowiest of black crows that has ever existed on this dark and unforgiving mortal coil.

If this song was just presented as another track on their newest album, you probably wouldn’t think much of it aside from having a cool, rootsy intro. But Mustaine’s strong penchant to have this be some ode to metalgrass fusion is where it gets a little silly. Supposedly Mustaine reached out to Willie Nelson to guest on the track, but Willie “couldn’t get his schedule to line up” (which is Texan for “I’d rather get raped by a skunk”). He also asked Miranda Lambert of all people. “Although she declined,” Mustain explained, “her manager was polite enough to reportedly say she didn’t feel she could make the song better. I was very flattered.”

Man, there’s so much accidental comedy in that quote.

Look, the song is fine for what it is, which is a metal song with a bluegrassy intro. It’s just that Megadeth metal never really evolved much from its 80’s-era introduction, and unfortunately their music hasn’t held up as well as Mustaine’s perm. Listening to this song makes me want to put on a black trench coat, poke my thumbs through holes at the ends of my long sleeves, and smoke Marlboros with my friends at a Waffle House before throwing eggs at the McCormick’s Caprice Classic because their kids are such preppie assholes.

At some point all music must evolve, or in this case, devolve to its roots, and that’s what Dave Mustaine and Megadeth are trying to do here. No, it’s not anywhere near a bluegrass or country song, but for Megadeth metal, the “bluegrass” approach adds something that they’re music has been craving for 30 years now—something new.