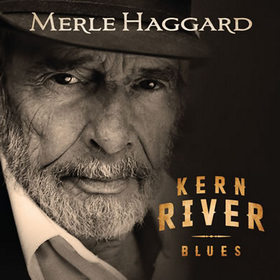 Merle Haggard left behind one of the most accomplished legacies in the history of country music when he passed away on April 6th. And he also left behind a treasure trove of recordings that have yet to be heard by the public. According to Merle himself, some 300-400 unreleased songs remain in an archive. But only one of those songs can be the final one he ever wrote and recorded.

As Merle was suffering from complications due to a double pneumonia and was in a hospital recovering, he would pen what would become his final song, “Kern River Blues.” Even though Merle was barely strong enough to sing, he put out the effort to record the song at his “Hag” studio with his full band. The song is being released on Thursday (5/11) after first premiering on SiriusXM’s Willie’s Roadhouse channel 59 at 4 p.m. Central.

READ: 300 to 400 Unreleased Merle Haggard Songs Remain in an Archive

“Kern River Blues” is about Merle’s memories of leaving Bakersfield, CA in the 70’s The Kern River is the primary landmark that runs through town. It was recorded on February 9th, 2016, and features Merle’s son Ben on electric guitar. “Kern River” is also the name of another famous Merle Haggard song from 1985 that became a Top 10 country hit.

“The family received a tremendous outpouring of love and prayers for Merle from his fans and is forever grateful,” says the Merle Haggard estate. “They were searching for a way of thanking everyone and decided to release this song.”

The song will be available at some point on merehaggard.com and on iTunes. 10% of the sales from “Kern River Blues” will go to homeless charities.

Get my breakfast in the sky

Eat my breakfast in the sky

Be a donut on a paper

Drink my coffee on the fly

I’m flying out on a jet plane

Gonna leave this town behind

I’m flying out on a jet plane

Gonna leave this town behind

Out by the county line

Put my head up to the window

Watch the city fade away

Put my head close to the window

There used to be a river here

Well, they used to have Kern River

Then somebody stole the water

When you closed down all the honky tonks

The city died at night

When you closed down all the honky tonks

The city died at night

When it hurt somebody’s feelings

I dug my blues down in the river

But the old Kern River is dry