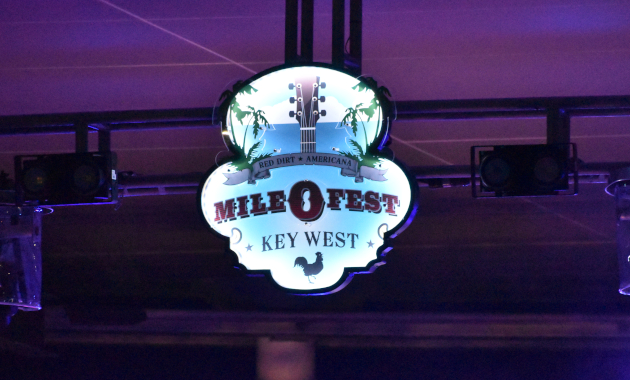 Mile 0 Fest in Key West, Florida had been very lucky this week dodging intermittent showers, but took a direct hit right as Friday night headliner The Randy Rogers Band took the stage. Heavy thunderstorms were moving into the area, and lightning could be seen off in the distance as Wade Bowen played his set at the the Truman Waterfront Amphitheater from 8:10 to 9:10 p.m.

Attendees were watching their phones, and wondering if they would call the event with the heavy weather moving in. But about halfway through resetting the stage for The Randy Rogers Band, owner and promoter Kyle Carter addressed the crowd, saying they had talked to the Key West mayor, were in touch with NOAA, and would try to fit The Randy Rogers Band in as the production crew rushed to get the band on the stage as quickly as possible.

Light rain began to fall even before Randy Rogers walked out on stage, and the rain began to increase quickly as the band played their first song. They played a second as the rain went from steady to hard, with Randy Rogers performing in a deluge before they finally called the show. Patrons scattered in the heavy downpour while staff worked to secure equipment from the weather.

Rain subsided before the evening showcases on Key West’s famous Duval St. were set to commence at 11:30, and all events afterwards were scheduled to go on as normal. Saving Country Music has inquired if the Randy Rogers Band set will be rescheduled, but event promoters did not immediately have an answer.