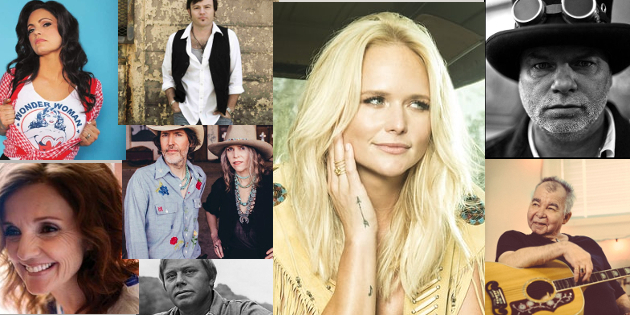 When you think of the modern country music landscape, you think of a clear delineation line between the independent and mainstream, with songwriters and performers who don’t receive major radio play being slotted into Americana or Texas Country, and songwriters and performers who are played on the radio being considered exclusively mainstream. In previous eras, this wasn’t the case. Guy Clark, Townes Van Zandt, Shel Silverstein, and others received great respect and support from the mainstream for their songs, despite not being mainstream names themselves, whereas today it’s often the usual cast of professional characters working off of Music Row who seem to suck up all the opportunity and attention for mainstream songwriting.

However the songwriting credits for Miranda Lambert are the one clear exception. Looking through her list of collaborators, it’s pretty incredible to see the artists and songs she’s chosen to champion throughout her career, and not just names from the past with established legacies, but sometimes the downright obscure. Beyond the support these artists have received from being the beneficiary of a Miranda Lambert liner notes credit, running through the songwriting credits of Miranda Lambert songs is simply a good way to discover some cool artists.

Here are some of them:

“Kerosene” was the first major hit for Miranda Lambert, and ignited her career when it was released in 2005. It became her first Top 15 hit, eventually was Certified Platinum, and set Miranda up as that “badass” woman of mainstream country. And it was co-written by alt-country Godfather Steve Earle. It was also the title track off of Lambert’s major label debut. From the very start, Miranda Lambert established that she would work with songwriters not just outside the Music Row purview, but artists who sometimes represent the polar opposite.

John Prine is arguably the greatest living legacy Americana songwriter left after the recent passing of Guy Clark, and arguably his most well-known song is “That’s The Way The World Goes ‘Round.” But that doesn’t mean it wasn’t new to millions of mainstream fans when she chose to put her version on her album Revolution that eventually went on to sell over 1.7 million copies.

Not once, but twice has Miranda Lambert championed this stalwart songwriting duo of Americana, first by covering the song “Dry Town” on Crazy Ex-Girlfriend, and then covering “Look At Miss Ohio” on Four The Record, with the latter becoming a favorite track for many Miranda fans.

Similar to Lucinda Williams, Patty Griffin built her career upon being covered by bigger mainstream artists—names such as Emmylou Harris and The Dixie Chicks. But of course by the time the career of Miranda Lambert had come along, most of those opportunities had dried up for Americana songwriters and performers. But that didn’t stop Miranda from plucking Griffin’s song “Getting Ready” out of general obscurity and putting it on her Crazy Ex-Girlfriend record.

If there’s any name that helps illustrate just how deep Miranda Lambert is willing to go to find a cool song, and how she is willing to feature anybody regardless of their stature in music, it would be Fred Eaglesmith. Not that Eaglesmith is super obscure and living under a bridge somewhere, but the Canadian songwriter is the kind of guy core songwriting nerds salivate over, but the mainstream world is completely ignorant of. Covering Eaglesmith’s “Time to Get A Gun” gives Lambert some serious street cred, and gave Eaglesmith a healthy dole of royalty money.

How many modern-day mainstream country music stars are covering Tom. T. Hall songs? Miranda Lambert is. Her 2014 record Platinum is probably seen as her least rootsy effort from her discography, but even then she took the time to cover “All That’s Left,” co-written by Tom T. Hall with his wife Dixie Hall. Miranda also had The Time Jumpers play on the track. So even when Miranda was at her most contemporary, she made sure to pay homage to the roots of the music.

Miranda’s support of Adam Hood goes beyond the songwriting credits. Early in Miranda’s career as she was blowing up, Lambert regularly booked Hood as her opener, and the opportunity landed him a publishing deal with Carnival Music. But even today Miranda’s support for Hood remains. A song he co-wrote with Brent Cobb, “Good ‘Ol Days,” was recorded by Miranda for The Weight of These Wings.

Natalie Hemby has some 15 songwriting credits with Miranda Lambert as one of her primary collaborators, and as folks up and down Music Row will attest, Hemby is one of the good guys and survivors of the Music Row system that has pushed so many songwriters of substance out of the business over the last few years. Hemby’s album Puxico received widespread critical acclaim in 2017, and many knew to seek it out after seeing her name on so many Lambert songs.

Probably the most obvious example of taking her opportunities and using them to help promote others, Miranda Lambert formed the supergroup The Pistol Annies with this set of struggling performer/songwriters, shining a bigger light on both of their efforts, and taking time to tour with them to promote the releases as well—something virtually unheard of from a major mainstream performer. Miranda has also cut multiple songs from Monroe and Presley on her solo records.

Before covering Chris Stapleton was cool (and few knew about him), Miranda was one of the people who championed the Kentucky songwriter before anyone else, cutting his song “Nobody’s Fool” on Four The Record. Also remember at the 2015 CMA Awards when Stapleton was stealing the night, Miranda Lambert switched from a dress to wearing a Stapleton T-shirt?

Jack Ingram – The Texas music stalwart has seen multiple cuts by Miranda, including her current single “Tim Man,” which was also nominated for multiple Grammys.

Shake Russell – The legendary Texas-based songwriter was not well-known outside the Lone Star State, but that changed when Lambert covered his song “You Wouldn’t Know Me” for The Weight of These Wings.

Carlene Carter & Susanna Clark – “Easy From Now On” was written by the pair appeared on Crazy Ex-Girlfriend.

Brandy Clark – It was artists like Miranda recording Brady Clark songs that allowed Clark to step out of the shadows and become a solo performer.

Allison Moorer – The sister to Shelby Lynne who was signed to a major label in the late 90’s saw a boost when Miranda recorded “Oklahoma Sky” for Four The Record.

Julie Miller – Long-time performer and songwriter—also known as the other half of Americana stalwart Buddy Miller—Julie Miller had her song “Somewhere Trouble Don’t Go” featured on Miranda’s album Revolution.

Audra Mae – Was the songwriter and first performer of Miranda’s “Little Red Wagon.”

Priscilla Renea – Co-wrote Miranda’s duet with Carrie Underwood, “Somethin’ Bad.” You may not like that song (and you wouldn’t be alone), but remember that name . . . .

….and others. Don’t jump my butt if I missed someone. There’s a lot of ’em!