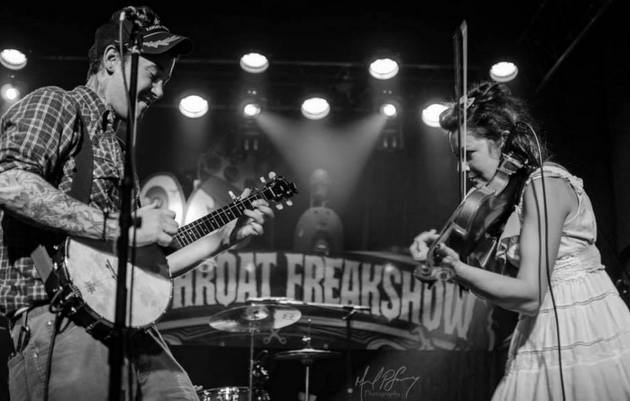 Call them the underground roots house band or the underground roots All-Star Band, either way the super couple of fiddle player Liz Sloan, and upright bass player (and banjo player, apparently) Jared McGovern have comprised, and do comprise the backbone of so many hard-working, road-weary roots bands, it’s a wonder they have any time to breathe, let alone record their own album. But here they are dubbing themselves the Urban Pioneers and releasing Addicted to the Road: a primitive, rootsy, Appalachian-style record showcasing a lot of heart, all original songs, and surprising skill in songwriting from two players who are mostly known as sidemen.

Jared and Liz first met the day before Halloween in 2010 right before a gig with country music wild man Bob Wayne at Austin, TX’s infamous Hole in the Wall venue. Liz Sloan was already touring with Bob, and Jared McGovern saddled up with the outfit that night, and the rest is history. For a good while they stared at the back of Bob Wayne nearly every evening, criss crossing the country many times, and dashing over to Europe, while in between shows working with other bands like Filthy Still, sitting in on recording sessions with a slew of other outfits, and eventually amicably parting ways with Bob and becoming badasses in the world-class Broken Band that backs former Saving Country Music Artist of the Year Jayke Orvis. 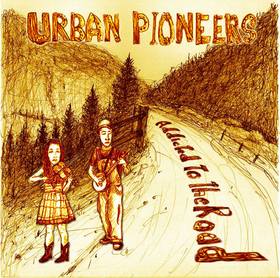 When I first heard about the Urban Pioneers, I was a little worried. Sometimes when sidemen decide to slide over to stage center, it can be a little rough. Not that McGovern and Sloan showed chinks in their armor; in fact it’s quite the contrary. The latest evolution of Jayke Orvis’s Broken Band is one of the most premium displays of string band talent out there right now, pushing the respective players to perfect themselves beyond the natural-given skill sets in an awesome display of spellbinding adeptness. But can these two really sing and write their own songs and hold an audience by themselves? The answer conveyed through Addicted to the Road is “Yes”.

The key to the success of the Urban Pioneers project was their decision to take it in a primitive, old time country direction. It is perfect for the skills that Jared McGovern and Liz Sloan bring to the table, is complimentary of their strengths and weaknesses, while giving them the ability to mostly re-create what you hear on the album in the live context. The singing on this album isn’t perfect; it’s lacking a little bit of confidence with some of the songs. And while that confidence will come with time, the simple approach to the singing on the album actually fits the Appalachian style of being just a couple of pickers on a back porch playing home spun tunes, not really resulting in a detriment to the album, but bolstering its authenticity.

Addicted to the Road has some really great tunes that fit very well in the old time style with cadence, theme, and perspective. This is Ralph Peer type stuff, really clever and informed in how they choose their words, honoring the era of the music so the lyrics and musical style coincide. Some of the songs near the end get a little thin, but “Apparition In The Fog,” “Autumn Time,” “Ain’t Gonna Work,” “Izzy’s Song,” “Liz’s Reel” and others are excellent little compositions written sincerely and arranged well.

There’s a lot of Hackensaw Boys and Foghorn Stringband in the Urban Pioneers approach: authentic, energetic, while resisting the urge to pass completely into the punk roots realm. There’s also a cool change-of-pace in the song “Broken Down” that features James Hunnicutt on electric guitar, and more of a Dave Dudley, hard country sound. Not a perfect project, but an excellent start, very fun to listen to, and makes me really look forward to what the Urban Pioneers might cook up in the future.

The Urban Pioneers are currently on tour. Cover by Lou Shields.

Preview & Purchase Addicted to the Road