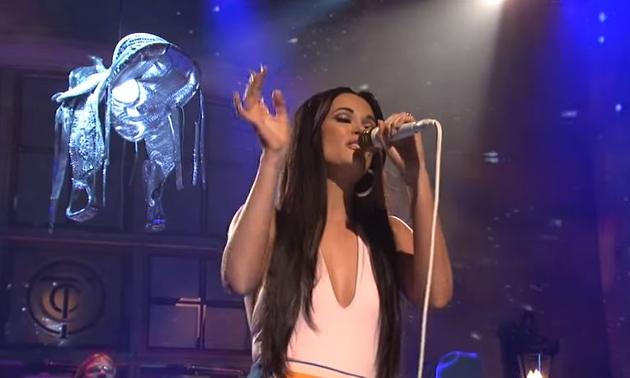 Though the allure and effectiveness of a nationally-broadcast television performance for a music artist has lost a lot of its importance in the modern media makeup, the Saturday Night Live stage still holds both a sway upon popular culture, and an opportunity to reach a dialed-in and diverse audience that is more important than the sheer numbers Nielsen tabulates. Being asked to play the show itself has become a hallowed gesture, and it has the potential to help create, extend, or in some cases, diffuse the buzz behind an artist or a song.

You don’t just have to be a big name to play Saturday Night Live. You have to be making a buzz behind your music in the cool, hip crowd, sort of like Kacey Musgraves has been doing with the release of her latest record Golden Hour. The record has been garnering substantial acclaim in media, including and especially outside of established country media. According to some, it’s best record that will be released in country music all year, which is a bold claim since we’re not even half way through 2018.

The album has its critics too, but even many of them will admit to Golden Hour including some stellar songs such as the stirring “Space Cowboy,” the heart-fluttering “Butterflies,” or what may truly be one of the “best” songs in country music in 2018 so far, the album’s closing number, “Rainbow.” Kacey’s also known for turning in performances that if nothing else, are interesting in how they’re presented with her dress and stage getup. So even if you didn’t have vested rooting interest in Kacey Musgraves, you were inclined to tune in Saturday night.

“Tired as hell but I gotta see my girl Kacey Musgraves sing #spacecowboy on SNL,” said Charles Kelley of Lady Antebellum on Twitter Saturday evening. “If she doesn’t I will hunt her down.” Unfortunately though, “Space Cowboy,” nor any of the other more universally-acclaimed songs from Golden Hour made their way onto the Saturday Night Live stage. Instead we received the disco-infused “High Horse,” and the mild, but inoffensive “Slow Burn.”

Song selection was just the beginning of the disappointment in Kacey’s performance. Her “High Horse” rendition began by the camera zeroing in on a bedazzled saddle hanging from the rafters, and that was apt symbolism of how the performance would be much more about presentation and appearance as opposed to substance. Kacey came across as awkward, seeming to be more concerned with how her hair was resting against her leisure suit as opposed to hitting the high notes of the song with strength. Her attempts at dancing and choreography felt forced and scripted. She didn’t look comfortable, and this translated to the audience shifting in their seats.

Meanwhile there were too many people on stage with her, while you heard instruments playing that were not there. The song started with a backing track to emulate the song as it is on the record. It’s difficult to determine whether the two fiddle players were actually playing live at any point, but at the 2:42 mark of the video (see below), you clearly hear fiddle when the two players are not playing. Meanwhile you have two guys standing behind consoles doing Lord knows what, and one of the best steel guitar players in the world, “‘Smokin’ Brett Resnick, relegated to playing a redundant acoustic guitar line with the guy beside him, and incredibly too loud in the mix. Kacey’s vocals needed a boost too, and that’s not her fault either.

In some respects, it’s understandable why Musgraves would go with “High Horse” to appeal to an audience much wider than the country music mindset. But more importantly, she should have gone with a song that could showcase what she does best, which “High Horse” did not. And on a program like Saturday Night Live, Musgraves is also acting as an ambassador for country music. If you tune in to watch Amy Schumer and see a performance like “High Horse,” you’ll be even more confused about what country music is supposed to be in 2018 than you already were accidentally landing on it on the radio. Artists from pop, hip-hop, and R&B come out and own that stage. Musgraves just appeared on it.

Kacey’s second performance was much better. “Slow Burn” still is one of the more mild selections Kacey could have gone with, but it represents the vibe of Golden Hour well, and the performance was strong in both Kacey’s delivery and the arrangement. Still, why go with two songs that are inauspicious picks when so many people were expecting to hear at least one, if not two of the best songs currently out there in country music that happen to have Kacey’s name on them? Charles Kelley of Lady Antebellum wasn’t alone. Many were hoping to hear “Space Cowboy.”

It all seems to go back to the lack of a true strategy when it comes to how to push Kacey Musgraves to the masses. Instead of selecting a strong song, releasing it to country radio, and daring country’s misogynistic programmers not to play it, the Musgraves team released two songs simultaneously—“Space Cowboy” and “Butterflies”—basically letting radio off the hook to not have to play either. These are also the two songs with high production videos behind them. Then Musgraves ends up on the SNL stage and avoids both of them.

This is a singles-driven market, even for album artists. You’re trying to create a buzz behind one song, and then ride that song hard to bust through the din of new music being released every week so folks will pay attention to your career and record. Once that song has run its course, you move to the next one. Instead Kacey Musgraves is all over the place with what she plays and where, and missing a big opportunity to codify the groundswell behind songs like “Space Cowboy” and “Butterflies” to an important and influential national audience.

In lieu of the buzz around the water cooler on Monday being about how badass Kacey Musgraves was, “..and did you see that bedazzled saddle?” it will be about how the bedazzled saddle was the best part. The response on social media has been very mixed in both Twitter and the YouTube comments, the two tracks Musgraves performed are not in the Top 10 of the iTunes charts (usually a phenomenon that parallels an SNL Performance), and they’re not even Top 10 on the country iTunes charts. It feels like a missed opportunity compared to the buzz and momentum we’ve seen from other country artists taking the SNL stage lately.

We show concern for things like Kacey’s Saturday Night Live performance not to impugn, but to be constructive. It’s important for country music to put its best foot forward on a national stage, and it’s especially important for country music’s women who are going systematically overlooked. For them to turn the tables on the narrative, they must make the best of these national opportunities to uphold their end of the bargain. They must smack home runs to prove country music’s folly for ignoring them. Yet by not putting forth her best songs—and by turning in a mild opening performance—it only strengthens the argument that artists like Kacey Musgraves are not marketable in the modern country context.

Kacey Musgraves will be fine. But she would have been so much better selecting and performing songs that showcase what she and country music can do when given equal footing in a national spotlight.