On The Wu-Tang Clan Playing The Ryman Auditorium 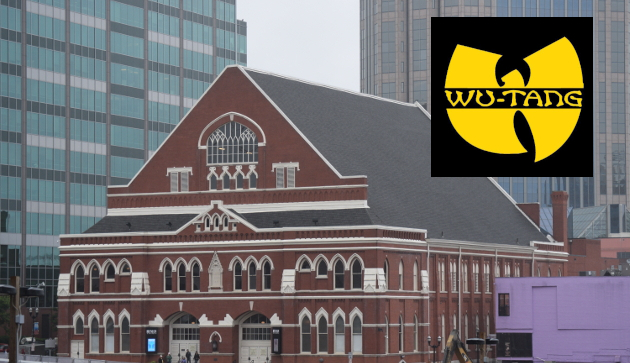 On Sunday night (6-9), legendary hip-hop outfit The Wu-Tang Clan made a stop at the Ryman Auditorium as part of their 25th Anniversary tour for a sold-out performance. Known affectionately as the “Mother Church of Country Music,” the booking of Wu-Tang at the Ryman might have seemed a little weird to some. But for those who pay attention to the doings at the Ryman know that beyond the building’s historic significance to country via the Grand Ole Opry, it’s also been Nashville’s premier 2,000-capacity performance hall for many years, regularly booking acts well outside the country music genre, from classic rock, indie rock, R&B, comedy, and even multiple hip-hop performers in the past, including headliners.

If anyone had a problem with hip-hop being featured at the Country Music Mother Church, that ship had sailed a long time ago. And furthermore, they shouldn’t. The Ryman was a church called the Union Gospel Tabernacle when it was first opened in 1892 before it began hosting the Grand Ole Opry in 1943 and became the Country Music Mother Church. And like any church, the doors should be open wide for anyone and everyone to come in and be welcome, to soak in and learn about the history of the building, and feel the weight of the iconic moments that occurred on its stage. The Ryman Auditorium is for everyone.

But the media saw a moment to make Wu-Tang’s stop at the Ryman as one about race, and similar to what we saw surrounding the controversy with Lil Nas X and “Old Town Road,” they went out of their way to embellish the historic significance of the event by participating in the same black erasure they regularly accuse country music of participating in by overlooking or excluding the contributions of African American and hip-hop performers.

“It’s an honor to be here in Nashville, Tennessee, at this historical event,” Wu-Tang’s RZA told the sold-out crowd Sunday night. “Tonight will be the first night that hip-hop performs at the Ryman. And listen, it’s all because of you.”

Unfortunately, this is just not true, though it’s probably not the fault of RZA or Wu-Tang for this misunderstanding. They were just parroting this misnomer spread throughout the media before and after the performance.

17 years ago, in 2002, Detroit hip-hop group Slum Village played the Ryman Auditorium, along with British R&B and hip-hop duo Floetry. They opened for African American R&B singer India.Arie, who has performed at the Ryman Auditorium at least four times in her Grammy-winning career. In 2013, rapper Nelly performed at the Ryman as part of a benefit hosted by Florida Georgia Line, and performed his own material along with his collaboration with Florida Georgia Line on the song “Cruise.”

None of these performances by hip-hop artists were headliner sets though. However this ground has been covered too. On February 9th, 2017, Lauryn Hill played the Ryman Auditorium as a headliner, and then in July of 2018, Janelle Monáe headlined the Ryman as well. Both women list hip-hop as one of their primary genres, though they’re both are also known for R&B. Were they not hip-hop enough to be included in the calculus of claiming Wu-Tang as the first hip-hop performer to play or headline at the Ryman? Were they not black enough? Perhaps it was because they were women. Or more likely, the press didn’t want these performers to get in the way of a good story.

Janelle Monáe and Lauryn Hill (and if you want to get technical, Kid Rock whose also headlined the Ryman numerous times) at least deserved an honorable mention when speaking about hip-hop performers or headliners at the Ryman. But in an article posted by NPR citing the historical significance of the Wu-Tang Clan appearance, neither Monáe nor Hill were mentioned at all, let alone Slum Village, Floetry, or Nelly. This same sentiment was then parroted by Rolling Stone and Stereogum and others in yet another example of the cut-and-paste media echo chamber.

The only outlet that got the history right was The Nashville Scene, citing the Lauryn Hill and Janelle Monáe headliner sets as oversights by Wu-Tang and the rest of media (though not mentioning Slum Village, Floetry, or Nelly). But the outlet also stated, “The Mother Church of Country Music has historically been a space dominated by white people,” which is its own bit of revisionist history.

Comedians Dave Chappelle and Cedric The Entertainer have also appeared on the Ryman stage, as have many Latino performers such as Santana, and members of the LGBTQ community, including Eddie Izzard twice, and the Twin Cities Gay Men’s Chorus who performed in 2006. All of this information can be verified in the Ryman Auditorium’s show history.

The Ryman Auditorium is not the Grand Ole Opry, though the two are often considered in the same breath since the Opry forged its legacy within the four walls of the Ryman, and still holds occasional performances there. And granted, the Grand Ole Opry most certainly has its own sordid past when it comes to race. Blackface comedy duo Jamup and Honey were members of the Opry throughout the 30’s. African American harmonica player DeFord Bailey was the first ever performer on the Grand Ole Opry in 1927, and played the radio show often, but was never made a permanent member. However by the time the Opry had moved to the Ryman in the 40’s, they had distanced from Jamup and Honey and similar performers, and for his contributions to the Opry, DeFord Bailey was inducted into the country music Hall of Fame in 2005.

For Wu-Tang’s part, they seemed honored and gracious at the opportunity to play the Ryman. “We bringing hip-hop to a country city right now,” said GZA of the group. “And we love country music, and we represent hip-hop, too.”

Wu-Tang are hip-hop legends, and regardless of how country fans may feel about their music, they deserve respect for the contributions they have brought to their genre. However truly historic or over-hyped the moment was, it should be considered and honor for the Ryman to have the group perform there, and country fans should understand it’s not out of the norm to have someone like the Wu-Tang Clan perform, and they should be willing to share their Mother Church with any and all who will respect the honor that comes with playing the stage.

The problem was the breathless way the media portrayed the event, once again looking to characterize country music as a white-only, racist, exclusionary institution that took until 2019 to have hip-hop act play its Mother Church, and skewing the historical record to do so in a way that excluded the contributions of other African American and hip-hop performers to the Ryman’s legacy. Some tried to use the Wu-Tang taking the stage like a finger in the eye of country fans. The Tennessean‘s review of the concert was titled, “Wu-Tang Clan at the Ryman: Rap Takes Over The Mother Church of Country Music,” almost goading country fans to be angered by the intrusion on their hallowed ground. And frankly, some probably were, and are. But this is partly due to the media acting like this was something that had never happened before, while silently celebrating the sullying of country music’s historical landmark as a way to stick it to country music’s closed-minded purists.

Amid the political polarization of America, country music is increasingly becoming the foil of political and music media as an artifice of white America which must be either integrated, or destroyed. It is increasingly becoming the victim of unfounded accusations and sometimes outright lies in a political proxy war, like we saw with the media and Lil Nas X overlooking critical contributions of African Americans past and present to portray country music in its present form as blatantly racist.

Without question, country music is, and always has been primarily dominated by white performers. But from the very beginnings of the music, from the contributions of African American minstrel performers, to DeFord Bailey, to Rufus Payne who taught Hank Williams guitar, to the Hall of Fame legacy of Charley Pride, to Grand Ole Opry member Darius Rucker and the African American performers of today, the legacies and contributions of black artists are significant, and deserve to be recognized, not swept under the rug for opportunistic journalists looking to manufacture internet click bait. Otherwise the media risks exacerbating racial tensions as opposed to resolving them, which they have most certainly done with both the Lil Nas X saga, and this Wu-Tang Clan performance at the Ryman.

Instead of engaging in responsible reporting, many journalists are using their platforms to virtue signal, and to earn social capital with colleagues and employers for challenging the whiteness of country music. However most of this is white on white conflict, with educated, affluent, and urban-dwelling whites accusing rural, high school educated working class whites of racism, and often with ad hominem arguments full of hastily-assembled facts that are often incorrect due to the writer’s lack of intimacy or professional knowledge of country music. Meanwhile country journalists who do have a good handle on the facts and history are afraid to speak up or they will be accused of racism themselves.

Call the Wu-Tang Clan country, or put them on a Grand Ole Opry performance in lieu of a country act, then you’ll have serious and warranted concern coming from country fans. Have them play the Country Music Mother Church which has always been open to artists of all genres and races, and it’s an honor to have them. Because music is for everyone, and so is a church.