Interstate 35 runs like a zipper down the gut of Texas, and acts like an unofficial border where the American South meets the West. The highway is also a musical corridor, being the main conduit in and out of Austin, TX, aka the “Live Music Capitol of the World.” Willie Nelson’s hometown of Abbott resides right beside I-35, and so did his massive truck stop/music venue/and museum called Willie’s Place near the town of Carl’s Corner, that has since been retrofitted into a much less impressive and generic Petro station.

Carl’s Corner also was the home to a few of Willie’s famous 4th of July picnics, and a place many musicians made a habit of stopping at over the years. Same can be said for the Czech Stop bakery in West, TX a few miles down I-35 from Carl’s Corners, with many autographed photos of famous musicians lining its walls.

Up and down that ribbon of I-35 are places that have been regaled in song by the musicians who’ve passed by them or had memorable experiences there. Some of these places take on the lore of those songs until they become living monuments of the songs themselves. Here are a few.

The best country songs write themselves, and that’s what happened when Billy Joe Shaver shot a man behind Papa Joe’s Texas Saloon, just south of Waco on the Interstate 35 access road. On March 31st, 2007, Billy Joe was in Papa Joe’s drinking when a man by the name of Billy Bryant Coker came up to Shaver and stirred Shaver’s drink with a knife. After some words were exchanged, Shaver decided it was time to leave, and Billy Coker followed. Out in the parking lot, Billy Joe Shaver was overheard asking Coker, “Where do you want it?” while brandishing a handgun. Shaver later testified in court he actually said, “Why do you want to do this?” to Coker, but eventually Shaver shot Billy Coker in the face and the news made it down to Austin where Dale Watson decided to write a song about it.

“We were making jokes about what kind of song he’d write about this ’cause he writes songs about everything,” says Gloria Tambling, the owner of Papa Joe’s that’s been an I-35 landmark for around for 19 years.

Billy Coker’s wound was not life-threatening, and Shaver was arrested on April 2nd, 2007 for aggravated assault, later to be found not guilty for acting in self-defense in a trial that saw Willie Nelson called as a character witness. Dale Watson wrote the song, but Whitey Morgan & The 78’s were the first to cut it on their self-titled album with Dale’s blessing. Dale’s latest album El Rancho Azul includes his version. 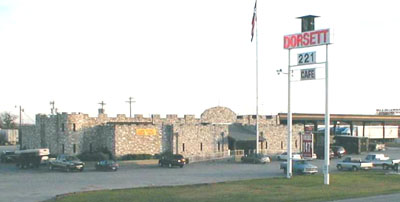 Off of Scott H. Biram’s 2005 record Dirty Old One Man Band is one of his signature songs called “Truck Driver.” Whenever Hiram Biram plays the song live, he dedicates it to “all of the truck drivers down there at the Dorsett 221 Truck Stop in Buda, TX.” Yes, the Dorsett 221 Truck Stop actually exists, or at least it did until 2005 when it was closed down. Opened in 1979 just south of Austin and right on I-35, Dorsett 221 was a trucker’s favorite and was famous for its chicken fried steak, breakfast tacos, and because it was built to look like a castle with parapets and corner towers.

Started by Tim and Lenora Dorsett, it was operated by their four sons who each were in charge of a specific part of the truck stop. The restaurant was a nice place for families to come and eat, but as time went on Dorsett 221 became somewhat famous for its crop of lot lizards that could be found lounging around. The existence of “glory holes” that Scott Biram refers to in “Truck Driver” could not be independently verified, but over time Dorsett 221 became one of central Texas’s most famous truck stops for its endearing character, and the characters it attracted.

It all went downhill for Dorsett 221 when a fire was started in one of the restrooms. During the restoration process, the four sons quarreled on how to proceed. Eventually one son took sole possession of the embattled truck stop and decided to close it. But the memory of Dorsett 221 still lives in Scott H. Biram’s song, and can still be seen on the side of the east side of the interstate as you’re passing through Buda, TX. 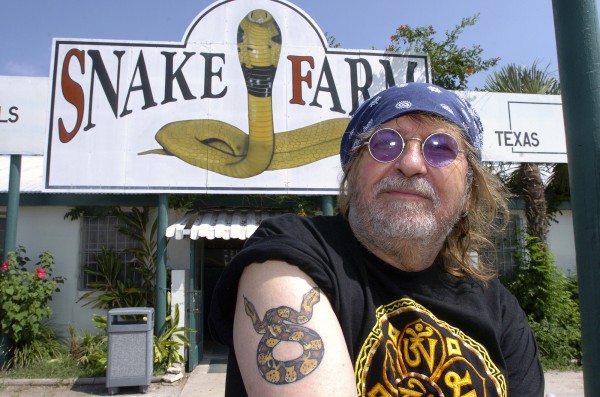 Did you hear what Scott H. Biram also referenced in the song above, and what shirt he was wearing? Yes there actually is a Snake Farm, and it went by the simple name “Snake Farm” for many of its 40 years in operation until settling on the much more docile, “Animal World and Snake Farm Zoo.” Located right off the Interstate 35 access road, the strange attraction and Texas landmark opened in 1967 (when I-35 was still Route 81) and currently sees around 400,000 annual visitors perusing its more than 200 species of snakes. The Snake Farm now features other exotic animals in its petting zoo and outdoor area, including monkeys, lemurs, hyenas, parrots, and a pond filled with alligators and crocodiles. 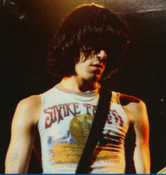 Ray Wylie Hubbbard’s album from 2006 is named Snake Farm, and includes the song “Snake Farm,” but Hubbard wasn’t the first musical homage to the reptile house. The Ramones discovered the Snake Farm when on tour in Texas in the late 70’s, and regularly wore Snake Farm T-shirts as part of their garb on and off stage. Oh, and did you notice the name of the female character in Hubbard’s “Snake Farm”? Yes, the Snake Farm has truly come full circle, and coils its way down the spine of good American music as an indelible artifact.