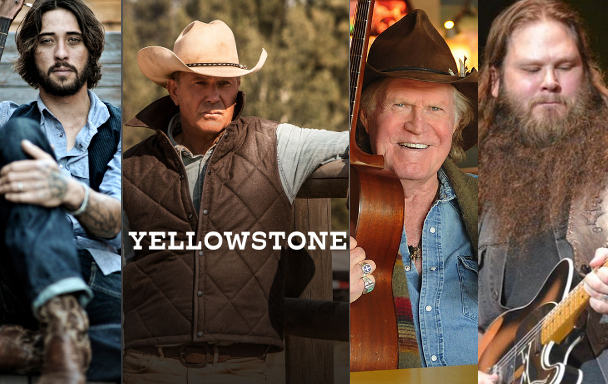 Paramount Network’s original series Yellowstone starring Kevin Costner has lots of folks talking with its rough and tumble drama, and panoramic vistas shot on location in the American West. But one interesting wrinkle for fans of independent country music has been the inclusion of multiple artists on the soundtrack in the series, and in pretty prominent roles. Last week Texas Southern rock band Whiskey Myers received a huge boost from the series when their music wasn’t just featured, the band itself saw screen time, resulting in their albums shooting up the iTunes charts.

But that’s just where the love for independent and traditional country artists from the series begins. Jay Ungar & Molly Mason‘s version of “Ashokan Farewell” made famous in the Ken Burns documentary series on The Civil War was featured in Episode 1, as was a song by the Texas country music supergroup The Trishas called “Trouble About My Soul,” and Chris Stapleton‘s version of “Tennessee Whiskey.” Whitey Morgan and the 78’s version of the old Johnny Cash song “Bad News” made an appearance in Episode 2, as did Billy Joe Shaver‘s “Goodbye Yesterday.”

Along with the big boost Whiskey Myers received from their appearances on Episode 4, the song “Keep The Wolves Away” from Uncle Lucius was featured, as was Ryan Bingham‘s ‘Sunrise.” In fact Ryan Bingham might be on deck to receive his own boost as he’s set to become a recurring character in the series beginning with Episode 5. As cool as it has been to see and hear some worthy artists receiving attention through the series, what Yellowstone might have in store with the soundtrack and appearances makes it even more compelling to follow along.

For those following along with a series, below is a (mostly) complete list of all the songs and artists featured on the series so far. Beyond the country realm, other good music is also featured in the series. As new episodes air, we’ll try to either update this list, or post new ones for folks who hear a song or artist they like, and want to find the name. Also if you see something missing or want to know the name of a song, feel free to pipe up in the comments section.

New episodes air each Wednesday on the Paramount Network.