Since Texas-based singer-songwriter Possessed by Paul James released his latest album There Will Be Nights When I’m Lonely out into the big scary world on October 29th, it has been on quite the tear, especially for an artist that up to this point was thought to only be known by a small, but dedicated sect of fans. The album held steady at #2 on Amazon’s Alt-Country/Americana MP3 chart for well over a week after the release, touched the #1 spot Friday night, and has remained in the top 10 since the release. Then this week, he received an email from Billboard informing him that his little independently-released album on Hillgrass Bluebilly Records had made it all the way onto the Americana/Bluegrass chart at #12, in between the latest albums from Old Crow Medicine Show and Noam Pikelny.

“I went over to our neighbors and we were just laughing our asses off in the driveway that it’s being that well-received,” says Possessed by Paul James,  who lives in the small Texas Hill Country town of Boerne. “This is the first interaction with industry if you will—that level of industry with Billboard. We’re blown away, we’re amazed. I think what that tells us is that even though there’s been minimal opportunities, we obviously have done a very nice job making sure people see how sincere it is, and the quality and sentiment behind the music really reaches people in a powerful way. I think that’s the one recurring theme that keeps us in it, because people keep responding so positively. Otherwise, I don’t know how in the world we would be even in the situation to have this type of interest right now.”

It’s not as if Possessed By Paul James spends his days on the phone doing interviews with radio stations and newspapers, or is out touring non-stop behind the album like many full-time musicians. Leading up to the release and in the weeks after, Possessed by Paul James, whose real name is Konrad Wert, has been busy running a classroom of developmentally-disadvantaged elementary-aged children as a full-time special education teacher—an occupation that has awarded him similar accolades to what he’s receiving in the musical world. Last year, Konrad Wert was named Teacher of the Year for his school, and was awarded a “Golden Apple” award in September as a regional distinction for teachers who excel at their discipline.

Even though his music is a part-time pursuit, it receives full-time love when Teacher of the Year Konrad Wert morphs into Billboard-charting Possessed by Paul James.

“The biggest difference with this album is we’re at a very unique time in our lives as a family,” says Konrad. “I think foremost that was the biggest difference with where the material was coming from. The writing style, the approach with what we wanted to record, and how we wanted to record was very different. I think that in itself opens up another channel for listeners. And for me as a musician, I wanted to get to another element within the music, another way to hear the music, sing the music, and write the music because that the whole reason we do it to begin with because it’s fun that way. And it’s going to keep developing in a different way. Our next record is going to be different than how we put this one out. It’s going to be a different style. It’s just bound to be the case.” 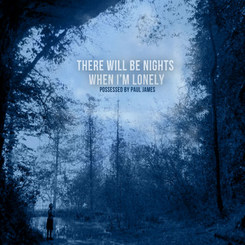 Possessed by Paul James says he didn’t start out to make a breakout album, but if that is what There Will Be Nights When I’m Lonely becomes, he’ll take it.

“In starting, the only goal an artist should have is what can you write, and what can you share. That should be the only goal. Nothing else. But when that feels solid, when you feel confident in what you’re writing and sharing, then the other pieces—the tools and the management of it—how to manage that and share it with a wider audience come into play. We didn’t have the intention of contacting NPR or Billboard necessarily. They were ideas, but all of a sudden, they’re contacting us. That in itself I think is an amazing accomplishment and a coincidence all happening at the same time around this release.”

Possessed by Paul James usually performs as a one man band, but There Will Be Nights When I’m Lonely features a full band sound on many tracks, while still respecting his live performance with many stripped-down songs as well. Appearing on the album with Konrad were world-renown steel-guitar player Lloyd Maines, Texas music Hall of Famer and harmonica player Walter Daniels, Cary Ozanian and Darren Sluyter from The Weary Boys, and members of Austin-based band East Cameron Folkcore. Watler Daniels, and Cary and Darren from The Weary Boys joined Possessed by Paul James on stage November 2nd during the CD release party at Antone’s in Austin, TX.