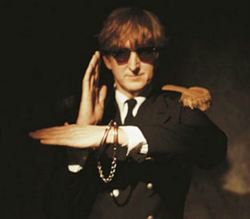 Big shot producer T Bone Burnett whose in charge of the music for the new ABC drama Nashville premiering tonight (10-10) had some pretty scathing words about the state of music in Music City when talking to The New Orleans Times-Picayune about the upcoming television series.

“These days, (country) radio is essentially a guy in his room with a computer,” T Bone told the paper. “Maybe he plays the guitar part and maybe he plays the bass part. The rest of it’s all computer.”

T Bone went on to share that the music they’re producing for the series will be “very, very commercial” when it pertains to the character Hayden Panettiere: the young, up-and-coming crossover star. But he told the Picayune everything else will work “around the edges” while calling mainstream Nashville music, “not that interesting.”

The most interesting things that happen in Nashville all happen around the edges. The things we all know about Nashville, we all know. And it’s not that interesting… Vince Gill doesn’t have a record deal, but he’s still every bit as genius an artist that he ever was. We’re going to work with all of those people to create an alternate universe of country music. It’s the universe that is the way it would sound if I was in charge.

Because the bottleneck of commercial country radio is so profound, there’s a wealth of incredible material laying around town. This is a big surprise to me, how many extraordinary songs we’ve been able to find. An industrial amount of bad songs, to be sure, but a surprising amount of really good, handcrafted, personal songs that people are willing to share with us because there’s no longer a platform for them to share their music at all. I hope that we become the platform for the people who are writing from their whole hearts.

Read How ABC’s Nashville Could Have Big Impact