One of the great things about country music is its legacy is so long, deep, vast, and rich, you can not only pick the name of a legendary artist and go spelunking through a long weekend of mining country gold, you can do the same with a given country era, or influence, or a regional flavor and lose yourself for a month finding new favorite songs, albums, and artists. This is what makes the country genre so ripe for discovery, and gives the music an incredible amount of variety. Certain eras can fit certain moods, mindsets, and occasions. The idea that the sonic scope of country music is limited is so shortsighted.

For the artists themselves, the same logic applies. Country music’s vastness gives them the opportunity to select a style that speaks to their passion the most, and then share their original sentiments with a specific era as the building block of their sound. We’ve seen this approach often in 2018, from Joshua Hedley delving deep first into the Countrypolitan era, Mike and the Moonpies with their distinctive take on early 80’s honky tonk, Sarah Shook with a decidedly Outlaw sound, and so on. Only stands to reason that the 90’s era with its polished style and slick, quippy songwriting could get the same treatment, and this is exactly what West Texas country newcomer Randall King has done with his debut, self-titled album.

Now that we’re 25 or 35 years removed from the 80’s and 90’s era, it infuses this particular sound with a sense of reverence and nostalgia that makes it something more than just retro. Emotions come rising to the surface in the way the songwriting and twang remind you of those tunes you heard on the radio growing up or in early adulthood, when certain loved ones were still around, and life was much less complicated. For some country listeners, the 90’s were when country music first started to sound new. But to others, it’s the first memories of country music they ever had.

A fourth generation hay hauler from the West Texas plains, Randall King is originally from the tiny town of Hereford, just west of Amarillo. He’s been kicking around the Texas scene for a while now, releasing an EP in 2016, and recently signing to the booking agency Red 11, allowing him to share some tour slots and stages with the finest in the Texas scene. Now he’s got the record he hopes takes him to the next level, and so far it’s earning big praise from listeners, and some of the biggest names in the genre. 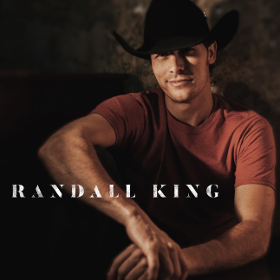 With the same deft accuracy and studious understanding other country artists have evoked certain eras in the modern context, Randall King comes out swinging and fleetly re-imagines 90’s country with one sharp song after another. Some of the terminology and subject matter might be a little more tweaked to modern sensibilities, but the music is authentic, and you keep having to check the liner notes, telling yourself this must be a song you heard before from Alan Jackson, John Anderson, or early Garth Brooks who himself has been praising Randall King, saying recently,

“Everybody always asks me, who are the new people that you’re looking at coming up. Guys, I’m going to tell you right now, this kid right here, Randall King. All I can say is, sweet guy, good guy, hell of a writer, hell of a songwriter. An independent artist. He’s not signed to a record label. This is what country music is all about for me.”

Granted, some see the late 80’s and early 90’s as the era when it all went sour in country music, specifically because of artists such as Garth Brooks ushering in such commercial success. But within that era there was a style of music that was most certainly still country and worthy of recollecting, even before balancing it out with today’s (sub)standards. Keith Whitley’s influence had songwriters of that time running circles around composers from multiple eras in regards to wit and wordplay.

Randall King wrote or co-wrote all but one of the 13 tracks on the new album. The aw shucks and simple cleverness of songs like “Takin’ Me A Heartbreak” and “Dent In It” are exactly the type of tunes people are talking about when they mention the term “real country,” and complain how the modern stuff misses the mark. Another favorite that has emerged off the new album is the touching “When He Knows Me” about dealing with the memory loss of a loved one that so many people have to suffer through as parents and grandparents age. Very specifically about Randall’s grandfather, the personal nature of the song comes through in the writing and performance, and may lubricate a few eyes.

When making this kind of country, a corny-ness can come with the territory, and at times that creeps into the writing process for Randall. The awkward pause in the chorus of “Break It” almost feels a little too characteristic of someone else’s song to work in this instance. “Tuggin’ On My Heartstrings” may struggle to find the right balance between clever and just plain silly. But there are still some good love songs on the record, like the driving, but sentimental “Her Miss Me Days Are Gone.”

Along with the songwriting modes, the music itself is spot on for re-imagining a by-gone time in country music when words and songwriting mattered, and the steel guitar was an essential element. You really do feel like you’ve just unwrapped the cellophane off a 25-year-old record for the first time, even if this is at the expense of some originality in the approach, which is another fair concern.

Older artists such as the recently-passed Daryle Singletary, Gene Watson, and others have done their level best to keep this era of country music alive. And now joining other younger artists such as Mo Pitney and William Michael Morgan, Randall King is making sure the best portions of an important era in country music don’t go the way of the dinosaur, but instead are preserved for future generations to be influenced from and discover as the diverse and expansive timeline of country music continues on.