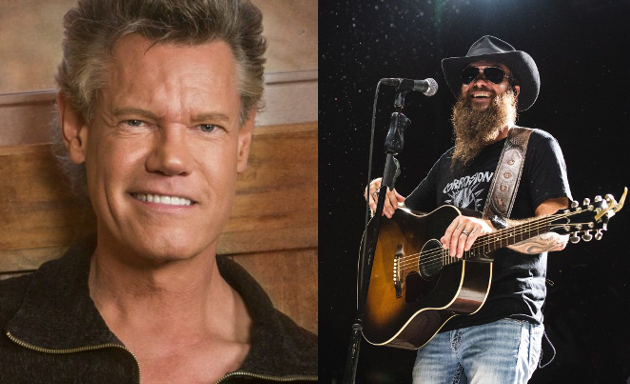 Just like any modern day country performer worth their salt, Cody Jinks from Ft. Worth, TX regularly pays tribute to Country Music Hall of Famer Randy Travis in concert, specifically including Randy’s 1986 #1 “Diggin’ Up Bones” in his set lists, and usually preceding it or following it up with some kind words for the country legend.

Cody Jinks has been doing this for years, but the moment became extra special on Friday night, January 25th at Heritage Hall in Ardmore, Oklahoma. Shortly after Jinks performed “Diggin’ Up Bones,” Randy Travis himself surprised Cody Jinks by coming out on stage. Accompanied by his wife Mary Davis, Randy personally thanked Cody Jinks as Jinks humbly took his hat off and the crowd began to chant in unison, “Randy! Randy! Randy!”

Then Mary Davis told the assembled crowd,“[Remember] when George Jones said, ‘Who’s Gonna Fill Their Shoes?’ He said Randy Travis. And I just want to tell you tonight, when people ask us who is gonna fill Randy Travis’s shoes, [it’s] Cody Jinks.”

We know Randy listens to Cody Jinks, because Travis regularly features Cody on his Diggin’ Up Songs playlist on Spotify. Cody’s “Hippies and Cowboys” has been featured on the playlist in the past, and “Somewhere Between I Love You and I’m Leaving” is currently on the playlist.

“I’m just glad I didn’t screw the song up with him sitting right there,” Cody Jinks said, and later added about the moment, “When I was a kid, there were three artist I wanted to sing like. One of them was Merle Haggard. One of them was Keith Whitley. And the other was Randy Travis!”

Cody Jinks is one of multiple independently-minded country artists re-writing the script on what is possible for a performer without mainstream radio support. His Rounder Records debut Lifers released in 2018 went #2 on the Billboard Country Albums chart, and Cody regularly sells out venues across the country.

Randy Travis currently lives just outside of Tioga, TX on his Chrysalis Ranch, which is about an hour from Ardmore, Oklahoma.