Red Dirt and Texas Country Have a Female Problem

On Monday (5/2), one of the fastest-growing festivals on the Texas country and Red Dirt circuit called Medicine Stone announced their 2016 lineup. Set to happen September 22-24th in Tahlequah, Oklahoma, it features a eye-popping amount of regional talent, including hosts the Turnpike Troubadours, Jason Boland and the Stragglers, Randy Rogers Band, Billy Joe Shaver, American Aquarium, Stoney LaRue, Shane Smith and the Saints, and many more (see full lineup below). If you’re looking to get a snoot full of the the most viable alternative to the monopoly the mainstream country music industry in Nashville has tried to shove down your throat, this would be a good place to start.

But like so many Texas/Red Dirt events (and yes, I know there’s a difference between the two so save the emails), Medicine Stone features almost no female talent. Aside from Jamie Lin Wilson (formerly of The Trishas), there are no other female names on their 30-name roster. This isn’t necessarily impugning the great effort the Medicine Stone organizers put into their otherwise stellar lineup, this is more par for the course of what you’re probably going to get from a Texas/Red Dirt event.

This weekend in Austin (May 7th and 8th) is the Lone Star Jam. Many of the same names that are playing Medicine Stone are playing the Austin event as well, including the Turnpike Troubadours, Cody Canada and the Departed, and The Damn Quails. And once again, in the entire lineup there is only one female, Bri Bagwell. Two weekend’s ago outside of Stephenville, TX was Texas country’s largest event—Larry Joe Taylor Fest. You could tell there was an effort to be inclusive to female artists by inviting in Aubrie Sellers, Sister C, and the female-fronted Black Lillies to the fest, but none of these acts fit squarely in what Texas country or Red Dirt is all about.

Simply put, the “scene” in Texas and Oklahoma has a female problem. If all of the consternation that has happened in mainstream country recently over the exclusion of women means anything, then the issue facing the country and roots music of the Texoma corridor might be two or three fold worse.

This doesn’t mean there is an effort to be exclusionary to women by organizers, promoters, or other artists. It’s probably more of a symptom of just not noticing the dearth of female talent for these functions. It’s just hard to see where the female acts are in the Texas/ Red Dirt scene at the moment. It’s not that there isn’t any female country or roots acts from Texas or Oklahoma. In fact mainstream country is absolutely filled with Texoma talent. The two biggest women in country music—Carrie Underwood and Miranda Lambert—are from Oklahoma and Texas respectively. Kacey Musgraves is an east Texas girl, and so is the upsurging Maren Morris. Part of the problem is that much of the region’s female talent makes a B-line for Nashville and never looks back.

Still, there are tons of female acts in Texas and Oklahoma that could work on these festival rosters, but they don’t seem to naturally fit in the whole Texas/ Red Dirt “scene.” You have plenty of females in the Western Swing scene like The Quebe Sisters and Hot Club of Cowtown. You have more traditional country artists like Brennen Leigh or Courtney Patton, or post-mainstream females like Sunny Sweeney and Lee Ann Womack. And you have more folk-style songwriters like Samantha Crain.

All of these female artists are great, and many are appreciated by the same fans as Texas country and Red Dirt. But since they don’t exactly fit in that whole country rock style that ultimately defines the scene’s sound, nobody thinks about including them. Instead you have many of the same names at these events, whether it’s Medicine Stone, Larry Joe Taylor Fest, Music Fest in Steamboat Springs, Colorado, or any of the other festivals.

After Medicine Stone announced their lineup, Oklahoma-based songwriter Samantha Crain voiced her displeasure at the lack of females on the bill. “Oklahoma is crawling with lady red dirt talent and Medicine Stone has a lineup full of men,” she said on Twitter. Though some of the people who responded to her only speak for themselves, it seemed to expose a more fundamental issue with how some see women in the Red Dirt scene.

To Medicine Stone’s credit, they stood up for Samantha Crain, saying “Don’t name call, no need for it. We don’t condone any of abuse coming to you.”

Ryan Engleman, the guitarist for the Turnpike Troubadours who host Medicine Stone said in response to the issue, “Just FYI – we tried to get 6 different female artists to this festival. Jamie was the only one that worked out,” which illustrates the challenge promoters in the Texas/Red Dirt scene have to finding female talent for their rosters. Nathan Poppe, a writer for The Oklahoman, responded to Samantha Crain, “What’s crazy is I didn’t even notice until you pointed it out,” which illustrates how the problem is escaping even the most self-aware of Red Dirt followers.

The solution here is not to just shoehorn females onto festival rosters to appease complaining do-gooders about inclusiveness. It has to be a more holistic approach about finding local and regional female talent to support instead of always leaning on the same obvious names for these events. Quotas are not necessary. If there was a serious effort to vet local and regional talent looking for the best up-and-coming performers, females will find themselves onto these rosters organically.

Texas and Oklahoma are teeming with female talent. Reach out to DJ’s and journalists who have their nose to the ground looking for the next artists that could become big, and they will confirm this. Maybe management companies and promoters can set up little meet-and-greets and mixers for female performers like the mainstream is doing to help spread the name recognition of their artists.

Right now, Texas and Oklahoma is being robbed of its female talent from Nashville and the two coasts. And these women are regularly sucked up into a system that absconds with their creative freedom, sexualizes their image, and drops them unceremoniously whenever their commercial viability is perceived to be spent.

That is what makes Red Dirt / Texas country such a healthy alternative to the mainstream music industry. By relying on community support, artists don’t have to make those tough business decisions that may put their career in peril in the long run. The Texoma scene is perfect for both launching artists, and sustaining them, and even offering a safe landing place if and when artists get rejected by Nashville. If an artist gets so big that their only alternative is to leave forMusic City like Miranda Lambert and Kacey Musgraves had to, then that should be seen as a victory for the scene. But Texas/Red Dirt should also take ownership in its female talent, and want to hold onto it if it can, and not acquiesce it to the ill’s of Music Row.

The vibrancy of the Texas/Red Dirt scene is what many music scenes should model themselves around, and it is one of the healthiest, most viable alternative to mainstream Nashville at the moment. But if it wants to continue to grow, and continue to outclass Music Row, it simply has to ask the question of itself, whether it’s a radio program or a festival lineup, “Where are the women?” And if that question is regularly asked by DJ’s, promoters, journalists, fans, and other artists, the female problem will solve itself, and relatively quickly. Because there’s talented women all over the place. They’re just waiting for the opportunity to prove it.

And by the way, the Medicine Stone lineup really is great, female issue aside. 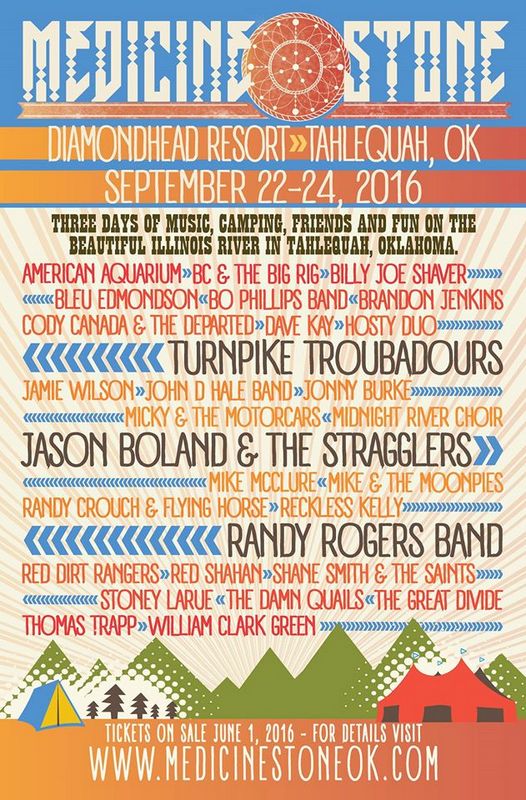