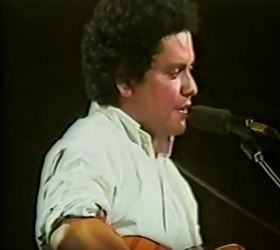 David Rodriguez, a beloved and influential Texas singer, songwriter, poet, and part of an extended musical family, passed away on Monday (10-26) at his home in the Netherlands according to his family. He was 63-years-old. Word quickly spread around the Austin and Texas songwriter community, and the Rodriguez-influenced Lyle Lovett dedicated his final song to Rodriguez at his show at Austin’s Paramount Theatre Tuesday (10-27) night. Lucinda Williams and other Texas songwriters also consider David Rodriguez as a peer and influence on their music.

David Roland Rodriguez was a Hispanic American born and raised in Houston where he contracted polio at two-years-old. Because of David’s mobility issues, his parents bought him a guitar and he learned to play music at an early age. David’s aunt, Eva Garza, was a Decca Records recording artist and Mexican actress in the late 40’s and 50’s. By the age of 14, David was playing guitar and piano in rock and folk bands.

Rodriquez eventually became a law and economics graduate, and a favorite of listening rooms in Austin in the 80’s and 90’s during a decade of living in the Live Music Capital, being voted Best Texas Songwriter in 1992, 1993 and 1994 in polls conducted by Third Coast Music. Then in 1994, David decided to move to The Netherlands where he resided for the rest of his life, but his musical influence lingered in both the canon of songs he left behind, and in the lineage of his musical family, and he continued to write and record music. David’s sister Leticia Rodriguez is also an artist, and his daughter Carrie Rodriguez is a well-known fiddle player and songwriter based in Austin.

Circumstances have it that Carrie Rodriguez just gave birth to her son Cruz Calvin Jacobs on October 6th. “He’s a laid back little dude – kind of like Dad,” Carrie said when introducing the newborn to the world.

David Rodriguez released a total of nine records between 1992 and 2007, mostly through European labels where his music also found an appreciative audience. Though not a household name, Rodriguez inspired many of his fellow songwriters in way that can still be heard in the music today.

Lyle Lovett recorded David’s “The Ballad Of The Snow Leopard And The Tanqueray Cowboy” on his 1998 album Step Inside This House.