Review – Ags Connolly’s “How About Now”

No matter how much they attempt to exile the spirit of true country music, no matter how much it is scattered to the four winds, or denied shelter by the gatekeepers of mainstream music, it will always find a home and a harbor in the hearts of real country fans, no matter who they are, or where they dwell. It may be people from the American South, born and raised in the same dirt that the sound originated from. It may be in Westerners, who carried the sound with them when they sought better fortunes. It could be Northerners, or rural dwellers across the country who find camaraderie with the sentiment of a country song. Or it could even be non-Americans who spend their whole lives feeling lost and looking for their true identity before finding a home in the songs of the South.

So that leads us across the pond, to Europe, and specifically the British Isles, where so many of the sounds that went into creating the foundations of old time and bluegrass, and eventually country music originated. As many of the embattled artists still making real country music will tell you, Europe has become a bastion of support from the number of people who still believe in the traditional modes of American country music compared to the numbers of people in the States per capita. One such person is Oxforshire’s Ags Connolly, a country music fan turned singing and songwriting aficionado. 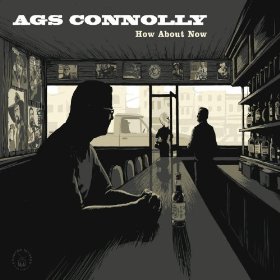 As he says in the song “I Saw James Hand”, “If I didn’t know I was country, then that made up my mind. When I saw James Hand, in London first time,” Such a sentiment speaks to the warmth that can fill the soul when you find something you connect with so humanly—something we’ve all experienced at some point, even when that something has been sitting under our noses our entire lives.

After studying and listening to country music for years, including a few forays over to the United States to see James Hand on his home soil, and even share the stage with Dale Watson at Austin’s famed Continental Club, Ags drew up the confidence to release his debut album How About Now. Unlike some of his British and European country-playing brethren, Ags doesn’t attempt to hide his foreign lineage, or ape country from a foreign perspective. Instead of talking about bars and beers, he talks about pubs and pints. And this type of “singing what you know about” approach makes this album something that is not just country, but that’s authentic in its perspective and approach.

Ags Connolly also doesn’t try to affectate the Southern drawl, but you can tell he’s studied styles and cadences of the country sound, and re-creates them while still staying very much within himself. Same can be said for the music on How About Now—very tasteful and selective, with strong country elements in places, while still trying to strike a unique sound for Ags alone, including a guitar solo on the song “She Doesn’t Need Anyone Anymore” that speaks to they study of not just traditional country, but how to instill progressive elements into it with taste.

How About Now gets better with every song, starting off with a protest ballad called “When Country Was Proud”. On a few of the first songs, Connolly feels like he may be stretching to convey his premise, but then with songs like “Get Out Of My Mind”, “I Hoped She Wouldn’t Be Here”, and the last two tracks “She Doesn’t Need Anyone Anymore and “How About Now”, he really finds his country music groove of telling a story that everyone has lived and can relate to, though few have been able to communicate in song before.

There may still be a confidence and an awareness that Ags needs to find within himself to have his music reach its full breadth, but How About Now is better than a good start. This album also may find special appeal to other British natives and Europeans from the familiarity of perspective, enhanced by a well-versed country experience (and so it’s been said, Connolly has adopted Dale Watson’s post-country term “Ameripolitan” for his music).

Drop all the qualifiers, discounts, and rhetoric about origin, Ags Connolly deserves to be considered right beside his Stateside counterparts as one of the carriers of the country music holy ghost whose carefully-crafted songs can speak to the human heart universally, irrespective of borders.

Listen to How About Now from Ags Connolly