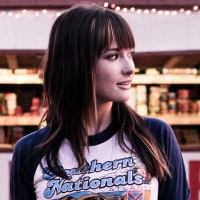 So you must approach this review understanding that this release could very well be one of the most significant events on the country music timeline in the last half decade. It also may not be. Time will tell. It’s not that the music on Same Trailer, Different Park is so groundbreaking. It’s where the album is being released from, and the circumstances surrounding it. Kellie Pickler’s 100 Proof also came from Music Row, and is probably a better, more well-rounded, and more country album. But by the time it was released, her label had already decided it would not have the support a major label release needs to reach its potential.

With Same Trailer, Different Park, there are no hurdles to jump, no walls to climb. The sky is the limit. Mercury Records Nashville is 100% behind Kacey and this release, even playing their political cards in the openly-collusive ACM Awards nominations process to get her boosted all the way to a Female Vocalist of the Year bid even before she released a major album.

Same Trailer, Different Park is the loss of corporate country’s innocence. It is a total flip of perspective from the fare the mainstream country public is used to, and not just because of relatively mild references to smoking pot or girls kissing girls–these cherries were popped years ago. It’s an awakening, an awareness of an alternative set of ideas that dash the mores that keep radio country and its listeners locked in suffocating patterns that don’t allow the soul the space for self-exploration and growth. It affords the listener the right to question their reality, and then it inspires them to find a new reality that is all their own. Same Trailer offers hope for both the individual listener, and the country radio format.

As I listened to Same Trailer‘s first song “Silver Lining” for the first time, I physically felt chills. The song is so exquisitely-written, so wise and indelibly touching, you almost lose your breath. When combined with the Kacey songs we already knew about before this release like “Merry Go ‘Round,” (read review) “Follow Your Arrow,” (read review) and final track “It Is What It Is,” just from the caliber of these songs, you couldn’t help but get excited that this album could be something earth moving, and this artist might be “the one” the critical country music fan has been waiting for to return the genre to substance.

But from there the album comes back to reality a little bit, especially after a few listens. You begin to realize that Kacey Musgraves is still a young artist trying to find her place in the greater music world, and won’t be able to capture lightning in a bottle every time she sits down to write or record a song. She’ll also be going up against a very male-dominated format wielding an arsenal of catchy, riff-laden singles formulated to cut right to the bone of lazy consumers. 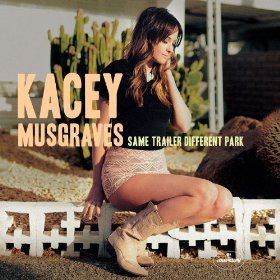 The Same Trailer, Different Park experience is dominated by some really killer tracks highlighting Kacey’s powerful songwriting, namely “Merry Go’ Round,” “Silver Lining,” “Follow Your Arrow,” and “It Is What It Is.” Then there are some really lighthearted and fun, yet deceptively-deep tracks like “My House,” “Blowin’ Smoke,” and “Step Off.”

This album also has a few filler tracks that leave the listener wondering where some of their favorite Musgraves songs from YouTube are, like the album-worthy “Undermine” that appeared on ABC’s Nashville TV show a while back, or Kacey’s super-witty “Trailer Song” that would have fit the title theme of this album better than others. Instead we got the somewhat plaintive “I Miss You,” and the droning “Stupid,” and a few others that are short of Kacey’s high-caliber potential. I know, you don’t blow your wad all on one album, but if Kacey Musgraves wanted to make a big leap with this album, she had to feature some of her best songs.

However a rising tide raises all boats, and even though Same Trailer, Different Park has some passengers, its strong songs carry the project. When you boil it all down, this is a quintessential Americana album, not a country one, with intelligent songs and sparse arrangements. There’s more drums in 30 seconds of any given Rush song than on this entire album. There’s really no solo parts, and the one’s there are stick very close to the melody.

Though the sparse Americana approach can work very well in bringing out the emotion in a song, producer Luke Laird is known more for penning pop hits than channeling T Bone Burnett. The music on Same Trailer is just kind of there, unless it is carried by the words. They got the “less is more” part about Americana right, but didn’t have the right progressive mindset to be truly creative with the open space they created. And there’s no benefit from contrast by including at least a few songs with a truly full sound. The production is playful, even bouncy at times, but always dialed back. It doesn’t always do its job of helping to sell these songs and their message to a greater audience.

And though Same Trailer is great for giving you the sense of Kacey Musgraves’ prowess as a songwriter, there’s really not any “moments” in her singing. No sweet spots are hit, no time when you really hear the emotion coming through her tone.

For years Music Row has attempted to re-monetize anti-Nashville sentiment with their own music, launching a crop of ‘new Outlaws’ with their “dirt road” and “ice cold beer” vibrato, but in the end they mostly served the same sect of mainstream country listeners since the music was still too steeped in arena rock to woo traditional and classic country fans. Now Music Row may be trying to commercialize the rise of Americana with Kacey, Ashley Monroe, and others, and it will be interesting to see if the Americana Music Association is willing to grow to match Americana’s increased influence, or still pretend that Americana begins with Buddy Miller, and ends with Jim Lauderdale.

In the end, the power of the song must be respected, and though the approach of Same Trailer, Different Park may be a little thin in places, most of Kacey’s songs are still giants of American songcraft and shine individually. Will this album change country music for the good? I’m not as optimistic as I was before listening to it. It’s really going to depend on the performance of the singles. But in many ways it’s a victory that this album was even made. It’s not the best mainstream album to come out in years, but its probably the best album that will actually be represented on mainstream radio and awards shows. And with its authentic, inspiring, and intelligent content, this can only be a good thing.