I can’t remember how it came up, but an OB/GYN doctor told me once that when you cut a pregnant woman open for a C-section, the sound it makes is the same made when a needle scratches vinyl. I don’t know if that’s true or not, but while listening to Micah Schnabel from the band Two Cow Garage , it occurred to me that his songs might be the sound you hear if you could cut open a human soul filled with a life’s worth of pressure and pain.

I had seen the name “Two Cow Garage” around, but can’t say I heard any of their music until this year at South by Southwest, when the band was booked in a slowly gentrifying east Austin bar at a showcase thrown by ninebullets.net. Because of concerns about the PA system, the whole band didn’t play. Instead Micah played solo, which gave me a good primer for this stripped down acoustic album. I promised myself before SXSW, I would write about the best non-country band that I saw, and even without this promise I would be writing Micah Schnabel, because out of the 25+ acts I experienced, nobody performed with such blinding, reckless soul.

This my friends is what music is all about. I certainly wouldn’t classify this album country, more alt-country or folk, or maybe just acoustic music. It doesn’t really matter what you call it when you can pen such masterful lyrics as these, and then deliver them with such abandon, with little regard for vanity or reception. If watching Possessed by Paul James live is like watching someone give birth on stage, then watching Micah is like watching a suicide. He screams and bleeds the pain out until all the demons are spent, then in the very next song discovers a fresh new batch of demons to expel with equal vehemence. 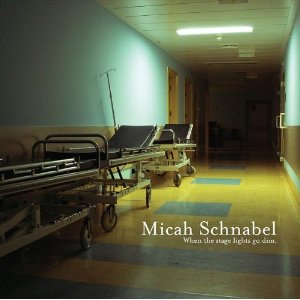 “Cut Me, Mick” is an absolute masterpiece of a song, as Micah rips his shirt open in mad, profuse self-righteous anger mixed with bitter, self-loathing awareness. Schnabel has the bravery to delve to places in the human soul most folks are way too afraid to go; the shit that we all push down and compartmentalize in ourselves, the ugly parts and the fears that we are unwilling to acknowledge. That stuff is Micah’s commodity. He expels it into a big bucket, and then with wide, careless swaths, paints huge, chaotic landscapes with it, working with it so deep and intimately as a medium that even when he is not performing, the genesis of human frailties and fears lingers under his fingernails like the grease and grit of a mechanic.

Micah Schnabel is not a good singer in the traditional sense. What he is, is unafraid, and his boldness and uninhibited honesty delivered with unchecked passion makes for very engaging singing.

There may be good and better songs on this album, but I don’t hear any bad ones. I give some credit it to this from the stripped down production that doesn’t get in the way of the superb lyrics and the honesty at the heart of the songs. As epic as “Cut Me, Mick” is, the song “American Static” might display the best songwriting of the album.

We just use them to revile those who remind us of ourselves.

The other song that really struck me was a cover of The Replacement’s “Can’t Hardly Wait” which was also covered on SCM’s 2009 Album of the Year Midnight at the Movies by Justin Townes Earle’s. I am admittedly very hard on covers songs, but this is where I swallowed the hook the hardest on Micah Schnabel. He made me appreciate the song even more, both versions of it, as he slowed it down and stripped it, and forced you to really listen to the lyrics, not just the catchy beat and cadence, and really delve into what the lyrics and the theme behind the song are trying to convey.

This record is endearingly lo-fi. Not sloppy, or poorly produced, just simple and not overly obsessive about the small things. Count offs at the beginning of songs are included, and even the compu-generated click track on “Cut Me, Mick” is still there. What does it matter? These little things may scare off the passive music listener, but the radio isn’t going to play these songs anyway. The most important elements are all accounted for and captured exquisitely.

I sense a lot of similarities between When The Stage Lights Go Dim, and Roger Alan Wade’s Deguello Motel. Both men strip it down to expose the heart of the song, though Micah goes a little farther, adding some fiddle if it’s called for, but only if it will fit, and both men sing their guts out with no fear. Some will listen and feel this is too “indie” for their taste, and I can’t argue with that. But this is one you have to listen to with your guts, not your ear, and if you do, you will find enjoyment.

Preview & Purchase Tracks From When The Stage Lights Go Dim

Video from above mentioned SXSW showcase: