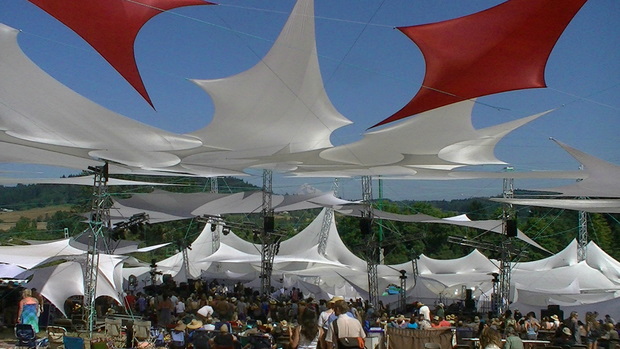 Man, I don’t even know where to start. Certainly Pickathon is an expensive festival in a severe corner of the country (just outside of Portland, OR), and these natural barriers will always keep some from being able to attend. But as far as creating the best environment to allow creativity to happen, and a model for other festivals and public events to learn and be inspired from, Pickathon has no peer, at least in the land that flies the stars and stripes. Was it the lineup I would have hand picked? No. But that’s the beauty of it. The lineup has a little something that everyone can get excited about to begin with, but it also forces you to step out of your little music reality tunnel, and discover something new.

The first discovery I made this year was Charlie Parr from Duluth, Minnesota. Though I’d heard the name and a few of the songs before, this is what a festival is for: slowing down and really paying attention to what an artist has to offer, and Charlie offered up some of the best songs of the weekend from a songwriting standpoint. Charlie is a brilliant lyricist that captures the pain and essence of low living. From the tales of dying and dismembered men, to the disenfranchised, homeless, lost souls and forgotten, they are all canonized through Charlie’s honesty and amazing clarity into perspective. Charlie doesn’t sing about subjects in third person, he becomes the subject of his songs in an uncanny channeling of character, and makes the story flesh and bone right before your eyes.

Next up was a band I’m quite familiar with, Whitey Morgan & The 78’s. My main interest was to see how a West Coast crowd handled this brand of honky tonk-inspired hard country served up with no frills. When they began their first show in the Galaxy Barn, it was maybe half full. But the signature bass drum beating like a beacon beckoned the Pickathon patrons from all corners, and by the end of the set, people were begging for a spot inside. 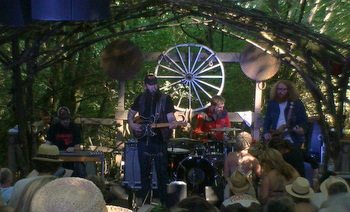 Only carrying a four piece on this trip forced Whitey into action playing his own leads, trading licks with the steel guitar player and showing tremendous taste. Whitey might like the freedom of having another Telecaster player, but when he’s knocking them out like he was this weekend, it’s hard to claim there is a hole.

By the time Whitey & Co. had concluded their second set out at Pickathon’s Wood’s Stage on Sunday, they had become a fan favorite from all the acts of the weekend.

The country theme of the Galaxy Barn Saturday night continued after Whitey Morgan with The Sadies, a legendary band that I’ve always wanted to see live, but have just missed on numerous occasions, including at Pickathon two years ago when they were touring with John Doe. They’ve also been the backing band for Jon Langford, Neko Case, and many others. Brothers Dallas and Travis Good front the band, and compliment each other exquisitely, with Travis being the super fast chicken picker with an extraordinary ear for tone, while Dallas, though no slouch moving the fingers himself, usually focuses more on creating ambient sounds and space in the music through vintage effects, finding a balance between making the music spatial, but still grounded in the roots.

Though they’re from Canada, they know how to blend all the great modes of classic American music together intuitively, and make the whole thing seamless. At first sniff you may want to pigeon hole them as a surf guitar band, they are so much more, blending country, bluegrass, rockabilly, mod, and even do-wop elements. Their music is inspiring, to say the least. They’re very short, very tight compositions combine the perfection of The Ventures, the technique of Bill Monroe’s Bluegrass Boys, and the style of Chris Isaak. How much did I dig them? Well, watching them made me want to obtain any and all albums of theirs, and I made it a point to watch every moment of all three of their Pickathon performances. So yeah, two guns up for sure.

Two bands top on my priority list to see that didn’t particularly blow me away were Truckstop Darlin’ and Eilen Jewell. Truckstop Darlin’ is a good solid band, but it felt like they were neither wheat nor chaff. They’re trying to be a roots band, but beyond the steel guitar and pearl snap shirts, it’s simply a rock band, a good one, but one I’m worried is not being marketed right. I enjoyed their set. It just didn’t capture me like I was hoping it would.

And same could be said for Eilen Jewell. Her latest album Queen of the Minor Key is a good one, but my concerns for that album were mirrored in her live show. She’s a good singer, but not a great one, a good songwriter, but not a great one. And she doesn’t have that wholly unique flair like the stalwarts of that sub-genre like Wayne Hancock or Big Sandy (who appears on her latest album) do. 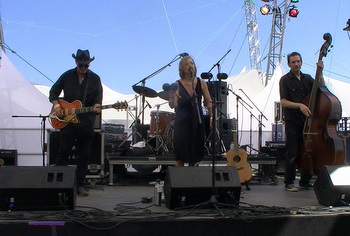 What she does have is a stellar guitar player, Jerry Miller. In regards to taste, he was the best player I saw all weekend. He was the best part of the performance, and felt like the most featured, as Eilen stood shaking maracas through extra-long guitar breaks. “Queen of the Minor Key” is one of the best songs so far this year, but after that, the music gets sleepy.

Two other bands on the top of my priority list I unfortunately missed, Ray Wylie Hubbard, who only played on Friday, and Pokey LaFarge, whose performance at Pickathon’s sit down-style “Workshop Barn” got so packed I couldn’t see a thing. I did meet up with Pokey later though, hanging out at what would end up being the marquee performance of my 2011 Pickathon experience, the set of Sunday Valley.

I am here to tell you folks, Sunday Valley’s frontman Sturgill Simpson is a singular talent, one of those one-in-a-million folks who is touched by the country music holy spirit, and has the vigor to fully realize his potential, and assert his solely original perspective on American music without fear. The man is a top shelf guitar player, with an original, Kentucky-bred style all his own, playing guitar like it’s a mandolin to create an energetic and active base for the music. But then at the right moments, he opens wide and bursts out with a rock & roll abandon, yet still somehow keeps it grounded with a Kentucky bluegrass flavor. The tone might intimidate some in the recorded format, but live, it is absolutely spellbinding. 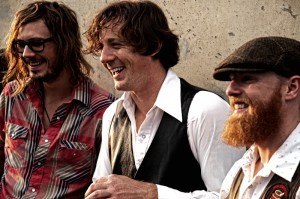 His guitar playing is so great, you can easily overlook his unique and soulful Southern singing. Pokey LaFarge, standing next to me for most of the set, kept remarking on Sturgill’s voice above the undeniable guitar playing (see Pokey pumping his fists for Sunday Valley at the beginning of the set). And like all great songwriters, Sturgill composes songs that play to his strengths while creating universal appeal in an audience.

And when you boil it all down, this is country, pure country. The genius of Sturgill is how he figured how to take his native Kentucky bluegrass, and electrify it into hard country, but stay just a hair shy of what you would call rock. There is tremendous twang and country roots here, despite the heavy-handed guitar approach. Drummer Edgar Purdom is a madman, and matches Sturgill’s reckless energy. At times on stage the two were challenging each other, gritting their teeth to play with more energy and abandon, and bass player Kevin Black held it all together, and supplied excellent harmonies.

The set ended with one of those moments you can only be there to appreciate. During an extended and wild rendition of their song “Never Go To Town Again”, Sturgill stepped out onto a monitor speaker that he was hoping to support his weight, and it didn’t, and he instead took a dive into the crowd. The guitar cord got caught on the microphone stand, and stage chaos ensued as gear went tumbling. But Sturgill didn’t miss a beat, never stopped playing, and possessed by the country music holy ghost, eventually popped up back on stage, eyes rolled up in the back of his head, wires and music stands intertwined with his limbs, and never even acknowledged the chaos until the song was over. As the sound man threw a box of tools on the stage, purposely trying to interrupt Sturgill, he performed a solo, slow encore number that exemplified a tremendous amount of poise and taste. It was absolutely stunning, and made Sunday Valley the kings of Pickathon’s Sunday, at least in the eyes of this bear.

Whatever praise, whatever accolades, whatever sway my good name has, I throw it all behind Sunday Valley and Sturgill Simpson 100%. This man deserves to be playing music for a living, and as long as that is not the case, it is a sin of our country.

Here is one of their songs, that believe it or not was one of the mid-energy songs of the set.

As for the Pickathon Festival itself: Excellent presentation, layout, facilities, staff, and volunteers, and thought they had no control over it, perfect weather. They’re pet project this year of eliminating single use dishes went off without a hitch or complaint, at least from this patron’s perspective, and almost every band I spoke to remarked on how appreciative and grateful the crowds were.