Review – The Defibulators “Debt’ll Get ‘Em” 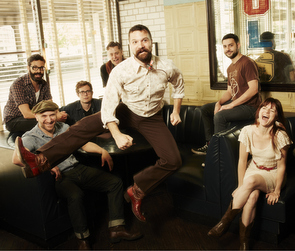 Somewhat weird, certainly smart-assed, but seriously entertaining, The Defibulators from New York, New York have unleashed their latest album Debt’ll Get ‘Em, ripe for weird looks and rank misunderstanding, but filled with some really good times.

They say there’s a band for every moment in time, and though that may be a tall order to lump on The Defibulators’ shoulders exclusively, they seem to define this strange time in country roots better than most. In many ways they’re a hipster band themselves, being a country band from the Big Apple and blending sometimes hokey elements and campy attitude into what otherwise is authentic country music. At the same time they’re armed with a keen sense of self-awareness, not only of themselves, but of their time and surrounding, and are quick to harp on the silliness of every other Anthropology major running around with a banjo, and legions of roots musicians moving to the big cities to take part in Mumford mania.

There’s no doubt that in 20 years or so, roots revival bands in their vests and suspenders will be the laughing stock of popular culture just like hair metal bands are today, but the Defibulators ask why wait 20 years when you can make fun of them right now, and in some ways make fun of yourself by proxy? Being a country band from New York City is somewhat campy itself, so why not embrace your fate, own it, revel in it, and most importantly, not let it get in the way of making great music, or the music you want.

The line between where the sarcasm ends and the seriousness begins with The Defibulators is hard to define, and they appear to like it that way. But one thing for sure is the Defibulators are nothing to laugh at as players or songwriters. New York may be getting infiltrated by hayseed musicians from North Carolina, like the moral of the Debt’ll Get ‘Em song “Cackalacky” conveys (see video below), but it’s hard to make it in NYC no matter what style of music you play unless you have some serious chops. And The Defibulators have them, evidenced throughout this album, and specifically on the seriously fun instrumental “Rumble Strip.” Can’t say enough about the players of The Defibulators, and there’s a total of seven of them so you could get tongue tied trying to shower accolades on them all, but needless to say, Debt’ll Get’Em is worth the listen if only for the music. 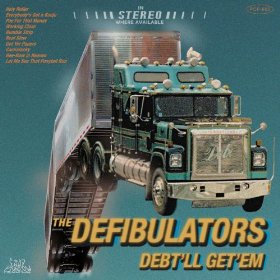 Acoustic guitar, banjo player, and front man Bug Jennings writes the majority of the songs, and is responsible for wrapping the true message behind The Defibulators so tightly in so many veils, it keeps you on your toes at all times, wondering just what the hell is going on, and if they are laughing at you or with you, or if you’re just supposed to stop wondering and listen to the damn music. Songs like “Working Class,” “Get Yer Papers,” and “He-Haw In Heaven” all have moments where they feel like they’re totally a bit, but nonetheless convey the entertainment of a honest to goodness country song.

The Defibulators secret weapon is the breathtaking Erin Bru, who can squeeze the pain out of a song like few others. Though she’s only featured out front in a few songs, she threatens to steal the show every time, like in the sultry “Pay For That Money.” When a girl is added to a band just to stand there and be cute and maybe sing some harmonies and shake a tambourine, there is nothing worse. But in instances like Erin Bru and The Defibulators, it can help legitimize the entire thing.

One of my concerns about the Defibulators is where they exactly fit in this big, scarey music world. Their strength is that their music is hard to pigeon hole, but it also might be their weakness. Aside from drawing shallow similarities to Jonny Fritz, I’m not sure where they belong, or if enough people will get them. But I got Debt’ll Get Em, or maybe it got me, but either way I definitely found it worth the listen.

Purchase Debt’ll Get ‘Em from the Defibulators