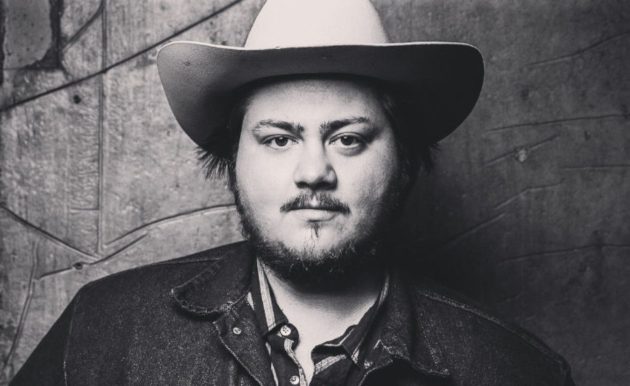 I don’t know what the hell has gotten into 2019, but damn if this year just doesn’t keep feeding us excellent debut records from artists you feel like you’ll be listening to for years to come, and ones that have that down home country roots goodness and sincere authenticity that you crave. You haven’t even gotten your fill of your last favorite record yet, and here comes another you feel obligated to pay attention to. The latest down the pike is Vincent Neil Emerson’s Fried Chicken and Evil Women, and go ahead and add it to the stack of stuff you need to spin.

Good ol’ vintage Texas country music bliss is what greets your happy ears when you pipe up this album. It’s a little bit of Western Swing flavor added to Texas Troubadour Ernest Tubb styling that nestles right in your sensibilities as an old soul, filling you with fuzzy feelings. With the steel guitar, the brushes on snare, Fried Chicken and Evil Women doesn’t try to fix what’s not broken, it understands that classic country music done right is timeless in its appeal. This is the kind of record you put on to enjoy a lazy summer afternoon, or a late Sunday morning. It pairs well with front porch swinging, chili and cornbread, and peach pie.

From Fort Worth, Texas, Vincent Neil Emerson is already familiar to quite a few after opening for the Turnpike Troubadours (weep), American Aquarium, and other bigger names over the last couple of years. Raised in Van Zandt County in East Texas by a single mother of part Native American Choctaw-Apache descent, he left home at 16, working odd jobs as he traveled around, eventually taking up guitar. Emerson was also was a beneficiary of a big shout out by Aquaman actor Jason Momoa along with Colter Wall and Ian Noe when they were all playing in Vancouver earlier this year. With the success Colter Wall is already having, the fast rise of Ian Noe in 2019, and now with Vincent Neil Emerson making noise, we might look back on that Aquaman moment years from now as an auspicious precursor for three significant artists. 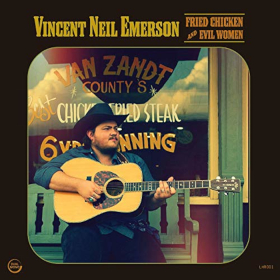 It’s not that there isn’t enough of these throwback dudes dressing in their grandad’s duds out there trying to make a career at crooning out old-sounding country songs. Arguably there may be too many of them at the moment, including hipster types embedded in the population that are hard to separate from the crowd. What makes Vincent Neil Emerson so unique is his singing style. Instead of putting on some affected voice, it’s his understated, almost lazy delivery that makes him a unique performer and such a pleasant listen. It also fits perfectly with his smooth, almost lounge like country sound that has those little inflections of jazz. It’s reminiscent of JJ Cale and some of Jerry Jeff Walker in its eased back nature.

If there is a knock on Fried Chicken and Evil Women, it’s that it might be a little too laid back for some to find engaging. There isn’t a lot of dynamics or stylistic changes between the respective songs, aside from swaying back and forth between Western Swing, early country, and honky tonk. But that’s also what gives the record its continuous listen quality and mood setting attributes, where you put it on in the background and it just makes whatever else is going on that much better. It may be a little lazy, but it’s not tired. It would be hard to call the up tempo of “Devil in My Bed” boring, or ignore the pep of the Western Swing-sounding “Willie Nelson’s Wall.” Yet the strolling rhythm and repeated melody of “Cactus Blossom Special” has this uninhibiting nature to it that helps take the edge off of modern life.

Style instead of songwriting is more likely the reason you would listen to Fried Chicken and Evil Women on repeat, but that doesn’t mean Vincent Neil Emerson is a slouch in the word department either. He’s just more attune with setting a vibe than spinning deep poetry, yet he gets plenty of fine lyrical licks in to give the record some depth along with the entertainment value.

Give yourself a treat by carving out some time from your busy listening schedule and the constant priorities of life to slow down and enjoy the passing of time with Vincent Neil Emerson, and his sweet little laid back treatment of classic Texas country called Fried Chicken and Evil Women.