But Willie Nelson doesn’t continue to make great albums because of this truth, he continues to make great albums in spite of it. Let’s face it, there have been moments in Willie’s career when he hasn’t been making the best albums, but right here, right now, with his last album Heroes, and now with Face The Music & Dance, I venture to say these would be considered great albums by any artist during any era. 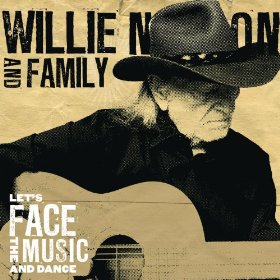 Let’s Face The Music & Dance is an album of classic standards, performed with Willie’s “Family Band” that now principally includes sister Bobbie on piano, and Mickey Raphael on harp. It is not a country album in the traditional sense of the term. But the music hearkens back so far, and this entire album is so awash in those well-recognizable Willie tones, it still has plenty of country feel to it.

Really this is an old-time jazz album if it is anything. With very sparse arrangements and the antiquity of compositions that lean toward the minor key, Let’s Face The Music feels like a collection of songs unearthed out of a tome from some previous, undiscovered Willie life as a 40’s-era jazz guitarist and singer. Willie’s Django Reinhardt influences –the man he says specifically inspired his guitar tone–are in full bloom on Let’s Face The Music & Dance.

Willie may be 80-years-old, but it’s not yet time to start using terms like “surprisingly lucid” to describe his playing and singing. Hell, Let’s Face The Music might be one of the best collections of songs highlighting Willie’s fluttering, Latin-style guitar work out there, while his voice remains strong as ever in all registers.

The real gift of Let’s Face The Music is that Willie is so familiar with many of these compositions and has been playing them for so long, his performances comes across so clean and effortless, yet they still seem fresh and inspired for this particular recording. Just like Willie’s opus Red Headed Stranger, the music on Let’s Face The Music gets out of the way of the most important elements of the songs: Willie’s voice, his guitar, and the message of the songs. Bobbie and Mickey still get their moments though to take the lead in certain compositions, and just like with Willie, their style has become so engrained into the American music ethos, it is simply delightful to hear them play anything.

Where Willie’s Heroes showed surprising freshness and relevancy, Let’s Face The Music And Dance shows just how powerful Willie’s voice and guitar have become, and how served nearly naked, they can still more than carry an album, they can make it something special.