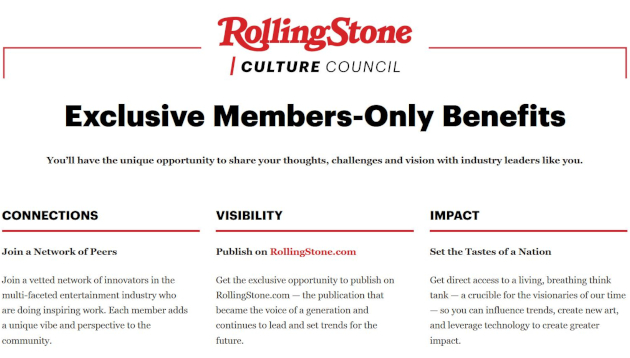 One of music and culture’s most iconic publications continues to blur the lines between paid content and objective journalism with the launch of a new program that allows individuals to pay for the opportunity to be published in the periodical. Rolling Stone is now offering what they portray as “thought leaders” the opportunity to write for its website if they are willing to pay a $2,000 fee to “shape the future of culture.”

Not only does this model undermine the traditional journalism model where publications are supposed to pay contributors for their work as opposed to the other way around, it also allows corporate propaganda from industry boosters and publicists to be presented as editorial content, with readers given little warning that what they’re consuming is a glorified ad, often composed by an individual who will directly benefit from the opinion or information being shared.

In emails obtained by The Guardian, individuals who pass a vetting process and pay a $1,500 annual fee plus $500 up front will “have the opportunity to publish original content to the ‘Rolling Stone’ website.” It is part of a program Rolling Stone is calling its Culture Council, which touts itself as an “Exclusive community for visionary leaders on the cutting edge of what’s new in culture.” The site goes on to say,“Being published in one of the best-known entertainment media outlets in the world sets you apart as a visionary, leader, and bold voice in your industry.”

We’ve already seen Rolling Stone‘s “Culture Council” in action. One article was written by a PR executive name Rosie Mattio, who promotes the cannabis industry. She published a set of positive predictions for the future of the cannabis industry in the publication. Another piece called The Future of Entertainment: How Sports Betting Will Change the Game was written Dan Healey, who is the founder of an online sports betting community. In other words, these are individuals with personal self-interests writing articles being passed off as objective takes on the industries they’re invested in.

A spokesperson for Rolling Stone‘s parent company Penske Media told The Guardian, “‘Rolling Stone’ does not allow paid content to run as editorial in any context whatsoever. Content created by Culture Council members exists in its own channel separate from editorial content and is clearly labelled as originating from a non-editorial, fee-based member network, which allows industry professionals to share ideas in a paid forum.”

However, readers have to click through or hover over a small notice at the top of such articles that explains they are part of Rolling Stone‘s Culture Council brand. Unless you interact with the notice, there is no specific notification the article is paid content. Furthermore, if readers simply click on a link from social media, they may not know they’ve navigated to the Culture Council portion of the website.

So far, Rolling Stone‘s Culture Council portal has published 36 total articles, with some being panel discussions among multiple experts. Quite a few of the articles surround the cannabis industry. So far, most of the articles dealing with music are focused around venues and the pandemic. For example, one article titled 4 Ways Venue Owners Can Connect with Audiences During the Pandemic is written by Gideon Kimbrell, who is the Co-Founder/Co-Chairman and lead technologist of InList, which is a concierge service for making event reservations.

The model Rolling Stone has adopted is similar to one used by Forbes as well. In fact, some of the members of Rolling Stone‘s Culture Council have been featured in Forbes too, including Gideon Kimbrell. By using the trusted brands of legacy periodicals, individuals in industries can bolster their own brands and standing within that industry, for a price.

Journalism professor Jeff Jarvis at the City University in New York said of the recent development, “I speculated recently that we might reach the point where one pays to write, not to read. I wrote about the fall of Forbes in 2014. It sold off a dying brand’s value to advertisers, making their ads look like content (they called it ‘brand voice’) and scaling content with ‘contributors’ (some OK, many crap). There goes ‘Rolling Stone.'”

Rolling Stone’s co-founder Jann Wenner sold a controlling stake in the company in 2017 to Penske Media, and then sold the rest of his ownership stake in 2019.

But Rolling Stone‘s Culture Council isn’t the only aggressive move the outlet has made into blurring the lines between paid and editorial content.

On October 2nd, 2018 Rolling Stone Country posted an article promoted on social media sites as, “Margo Price on her favorite pickup truck, getting pulled over and how she wrecked her first car,” with a picture of the artist sitting in the bed of a new truck beside a dog, and holding a chicken. On the surface it looked like a run-of-the-mill lifestyle feature on Mrs. Price, enticing readers to click and read more. But when you clicked, what populated was “Road Test: Margo Price Steers a Ford F-150.” As you read through the article, it became evident this wasn’t just a feature on Margo Price, it was an advertisement for the Ford F-150, at least in part.

On this late July evening in Nashville, the country singer is climbing behind the wheel of a 2018 Ford F-150. She grins when she fires up the diesel engine. This F-150 is the tricked-out King Ranch edition — air-conditioned seats that massage your ass as you drive; a cab that could fit a small band; leather trim — and Price wants to go for a joyride.

As the article continues, it mentions the Ford F-150’s Bang and Olufsen stereo system, and its 3,200-lb. towing capacity—things that would normally not be included in a lifestyle article, calling into question if this was a piece of independent journalism, or what is often referred to in the publishing industry as a “native ad,” meaning an ad for a consumer product or service that is made to look like an article as opposed to a standalone advertisement. The term “native” comes from how the ad is made to look similar to the other content native on the media platform, hoping to inhibit the consumer’s recognition of the content as advertising, and making them more receptive to engaging with the ad copy.

Native ads are not uncommon on the internet and in print publications, even from major publishers, though they remain controversial both in the publishing industry, and among consumers. With ad revenue dwindling and competition increasing, outlets across the publishing spectrum have been forced to get creative with advertising to compensate. But guidelines from the Federal Trade Commission, or FTC, expressly state that such content must be disclosed to the public if there is a possibility that readers may be mislead about the nature of it, which Rolling Stone did not do in this case.

Even if the native ad includes other information not directly tied to what it is being advertised, disclosure is still required. The regulations were put in place when print media began adopting native ads, and consumers were being increasingly mislead into thinking they were reading objective articles as opposed to advertising content.

In the case of Rolling Stone, consumers weren’t just possibly misled once, they were misled four times. Along with the Margo Price feature, Rolling Stone also published articles with Quavo from the band Migos test driving a 2019 Mercedes G-Wagon, Taylor Goldsmith of the band Dawes driving a Volvo XC60, and Luke Spiller of The Struts riding around in a Rolls-Royce Phantom. Similar to the Margo Price feature, each article is peppered with promotional copy and bullet points for the vehicles, while to the average consumer, it may just look like a feature on the artist. 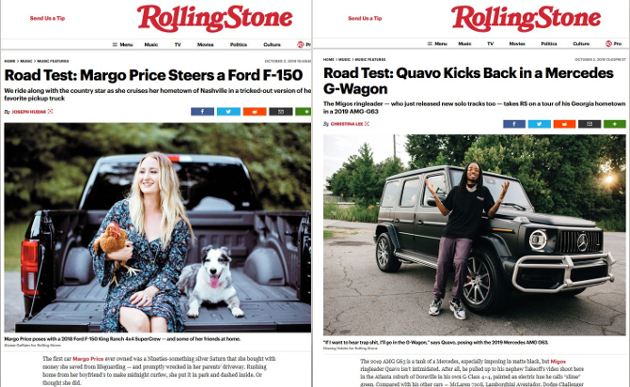 As the FTC guidelines clearly state, “Disclosures that are necessary to avoid misleading consumers must be presented clearly and prominently. Whether a disclosure of a native ad’s commercial nature meets this standard will be measured by its performance – that is, do consumers recognize the native ad as an ad? Only disclosures that consumers notice, process, and understand can be effective. Inadequate disclosures can’t change the net impression created and won’t stop consumers from being deceived that advertising or promotional messages are something other than ads.”

Saving Country Music spoke to representatives at the FTC specifically about the Rolling Stone posts, and though the agency doesn’t speak publicly on specific cases, they verified the concern for the Rolling Stone ads/articles.

“Even if a significant minority of their readers would not know that it was advertising, they need to be disclosing that, and making that clear,” a FTC representative told Saving Country Music. “If they are disguising advertising as content in the guise of a portrait or profile of on a particular musical personality, then that would be deceptive and violate our guidelines.”

It’s the fact these posts from Rolling Stone with advertising copy were totally undisclosed, and written in such a surreptitious manner that makes them a potential violation of ethical standards in journalism, and of FTC rules.

Saving Country Music reached out to Rolling Stone for comment and clarity on if any money had been exchanged between the auto manufacturers highlighted in the articles, and the publication or artists featured. Rolling Stone did not respond. Perhaps the periodical was trying to probe how far they can go into the native ad territory by stretching the tenets of the FTC’s rules.

Regardless, the ultimate goal of the articles was not just to highlight music artists, but brand new vehicles for sale, and not in an objective manner such as a review a magazine such as Car and Driver might post about a new model vehicle. Even if the outcome is amicable for the outlet, artist, and auto maker involved, and even if money didn’t change hands, the practice is a further blurring of the lines between objective journalism and obvious advertisement that works towards eroding the integrity of the entire publishing industry.

Meanwhile Rolling Stone is also moving forward with disclosed paid advertisement as well, and using music artists and celebrities to entice readers to interact with the content. On February 4th, Rolling Stone published an article titled, “Shooter Jennings on the Bold Journey That Took Him To L.A.” Though the article and accompanying video does convey the story of Shooter’s California move, it is heavily branded for Can-Am. Though this is a more common use of conjoining lifestyle content with advertisement, it signals that Rolling Stone is looking to exploit all fronts from branded content and additional revenue, even as the outlet partners with once rival Billboard, and erects paywalls around most of its articles.

Rolling Stone is also posting many more articles whose primary purpose is to advertise products, and to entice readers to click on links where the periodical earns a percentage for every item sold, and a user’s personal cookie data can be collected by sellers. An article posted on February 3rd titled “Tom Brady’s Health and Wellness Brand Scoring with Fans As Super Bowl Approaches” is little else than a list of recommended fitness products. It is preceded by the disclaimer, “Products featured are independently selected by our editorial team and we may earn a commission from purchases made from our links; the retailer may also receive certain auditable data for accounting purposes.”

As legacy periodicals such as Rolling Stone face depreciating brands and business models, it presents a challenge for editorial teams and sales staff to keep the business profitable. Branded content and paid advertisement is essential for many publishing business to stay afloat. But a name once tied closely to progressive values, an independent approach to journalism and music, and transparency in media is continually graying the line between what is an ad, and what is an article. It does not bode well for one of the recognizable brand’s in music journalism, or consumers as they try to delineate objective journalism from a paid advertisement.