When it comes to picking the “best” songs from a given time period, it’s a much more subjective chore than selecting the best albums or the best artists. Our relationship with songs is just so much more intimate. The emotions songs can touch tend to range so much farther on the spectrum. To discover a song that really touches you, it’s not just dependent on the songwriter to write and perform a compelling tune, it’s dependent on the listener to either be open hearted enough, open minded enough, or to be experienced with the same emotional sensations that inspired the song for it to score the deepest impact.

The “best” songs feel like they were written for you, and you only. They’re uncanny how they meld to your little experiences, dredging up dormant feelings, reviving potent memories, unlocking lost learning, and most importantly, remind you of the richness of feeling alive, regardless if those emotions are ones of happiness or sorrow. 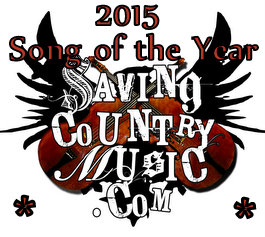 Narrowing down the field of the “best” songs in 2015 proved to be especially difficult. And so to make it easier, the uncommon, but not unprecedented move of rendering a split decision was implemented. Two songs seemed to separate themselves from the pack, but both were too strong to separate from each other. When it comes to songs and songwriting, once again Texas and Oklahoma reveal themselves as the hotbed for this current era’s most compelling writers. That was true for the majority of the candidates for Song of the Year, and it’s true for the two eventual finalists.

It would be so easy for Oklahoma’s Turnpike Troubadours to turn into a party band, and blow up even bigger than they already have among young people and late night revelers. But you can tell that Evan Felker, the principal songwriter and frontman of the outfit, feels the pressure of his Oklahoma peers like John Moreland, former Troubadour John Fullbright, folkies like Samantha Crain, newcomers like Parker Milsap, and the ever-present spirit of Okie-native Woody Guthrie, to keep the songwriting effort at an elite level.

Some songwriters must rely on wordplay or humor to woo you into relating, but Evan Felker uses the raw emotions of the moments that go on to define our lives. And so does Texas-based songwriter and performer Cody Jinks, and arguably never more potently than in the song “David” from his 2015 release Adobe Sessions. Though a much more dark tale, and a more specific one in regards to the story, it still includes that personal wallop all great songs must, and just like “The Bird Hunters” it’s a fiddle-driven tune fraught with emotion.

Technology continues to cheapen the value of music. Artists who focus on songs first and entertainment second still struggle to get noticed in popular culture. But the crop of songs and songwriters, especially in the Texas scene, continues to be as strong as it ever was, and should be the first place to look for listeners who don’t just want to hear, but feel.

Contratulations to the Turnpike Troubadours’ “The Bird Hunters,” and Cody Jinks’ “David”—Saving Country Music’s Songs of the Year.