Where 2011 felt like a high water mark year for live performances and an average year for recorded projects, 2012 feels vice versa. When I look back on 2011, it seemed like there were moments I experienced that I will never top the rest of my life. 2012 is the year that some albums and songs were released that may never be topped. Still there were a quite a few memorable performances worth noting.

Unlike Saving Country Music’s other yearly awards, since omnipresence isn’t an attribute I posses, this is simply based on my own experiences, not meant to capture the overall pulse of the live events that transpired all year. And please consider that even though I may have attended events like Pickathon, The Muddy Roots Festival, or SXSW, I was unable to catch every performance, or enough of certain performances for it to feel fair to include them here. If you feel there is an omission, please share it with the rest of us below.

Usually in music you get the raw, primal, gut punching experience, or you get the introspective, heartfelt, cerebral experience. The Calamity Cubes are one of those few live performers who can deliver both. They put on a great set at the Muddy Roots Festival in Tennessee as well, but their XSXSW performance in a more intimate, tight-knit setting rose to being something special.

Kody Oh! doing a bass stand in the center of the crowd: 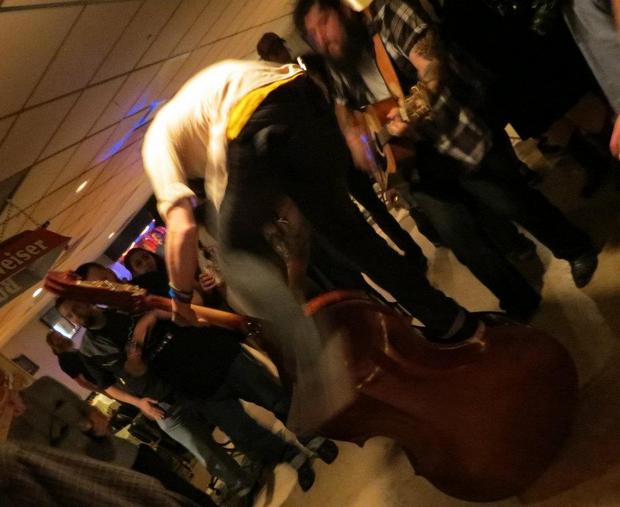 Jayke Orvis is always a crowd favorite, and Jayke and the crowd were pretty miffed when the sound crew pulled the plug on them at 2-something in the morning. But sometimes the worst situations breed the most memorable moments, and that’s what happened when Jayke and his Broken Band hopped into the crowd and kicked it acoustic style, sound guys be damned. Other highlights of the set were JB Beverley singing “Streets” with Jayke from his album It’s All Been Said, and Rachel Brooke singing her duet with Jayke “Hold Me Tight” from the .357 String Band’s magnum opus, Fire & Hail. 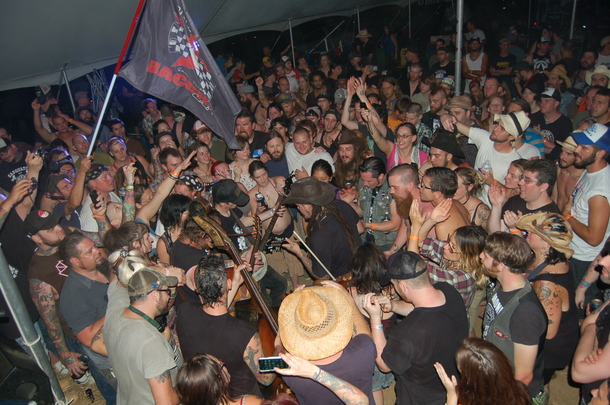 L.C.’s friend Robert Belfour deserves praise for the craziest performance story of 2012. Crashed out on the highway from the torrential rains of the tropical storm that had made its way to middle Tennessee, Robert hopped into the tow truck and told them forget the car for now and point their nose to the Muddy Roots site, he had a gig to play. He showed up late, but he showed up, with the tow truck driver carrying his amplifier and guitar.

Meanwhile during the delay, L.C. Ulmer laid down one of the baddest-assed extended sets of blues music all weekend, chicken hopping across the stage and playing guitar behind his back. It was one of the most surprising sets of music I saw all year. 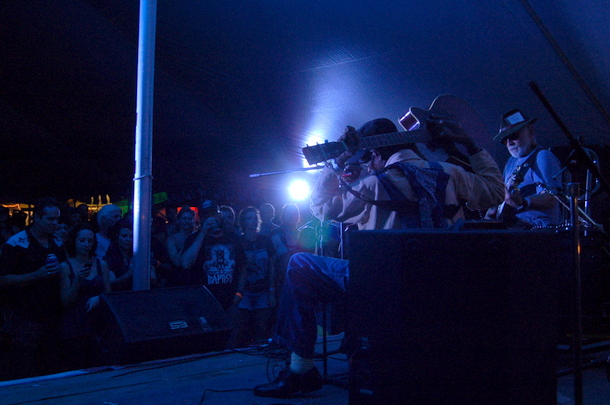 The first time I ever saw Reverend Peyton’s Big Damn Band live I straight up walked out. Too much chicken and fried potatoes for me. Granted, I was mainly there to see Austin Lucas who opened the show, and it was at the armpit of Austin music venues–the now condemned and shuttered Emo’s. But nonetheless after 15 minutes, I was done.

Rev. Peyton did something in 2012 though. He figured out the right formula for his music, both recorded and live. And his set at Muddy Roots was sheer madness from downbeat. It culminated in the crowd throwing handfuls of hay up in the air while Washboard Breezy lit her washboard on fire in a mad scene I will never forget, and neither will drummer Aaron “Cuz” Persinger who has an acute hay allergy and had to rush off the stage after the last song to keep his lungs from collapsing.

Audio sucks in the video below, but you get the drift.

After seeing them perform at Pickathon’s “Pumphouse”–a small shack isolated in the woods where bands go in and make top notch videos for the site Live & Breathing–I made a vow to catch their set on Sunday at Pickathon’s Workshop Barn. Right up there with Thee Oh Sees, Lake Street Dive from Boston was one of the new take-aways for me from 2012 Pickathon. Though maybe a little more polished and jazzy for traditional Saving Country Music fare, their style and musicianship was enthralling and made me a fast fan. After their last Workshop Barn song, they got the biggest ovation I think I have ever seen for a live performance, possibly ever. I was afraid the floor was going to cave in.

Yes I know, not really country. At all. Though I would say there’s some serious roots influences at play here. Regardless of what you want to label them, Thee Oh Sees are a force of nature in the live context, and it is about time that they busted out of their San Francisco scene to find a place in the greater music consciousness. They are sonic craftsmen (and craftswoman) who seem to understand intuitively how to tickle all the nerves that make your mind and body submit to music and make you wiggle around like an unruly child. Thee Oh Sees are a must see.

Three times in 2012 I was regaled by Bob Wayne and his Outlaw Carnies, but there was something special about the night at The Continental Club. Seeing him in one of Austin’s most legendary venues, and with probably his best Outlaw Carnie lineup yet in Ryan Clackner on guitar, Lucy B. Cochran on fiddle, Elmer on bass, and with a full-time drummer in the lineup for the first time, they laid down an ass whooping of a set. This is where I realized that Bob Wayne had completely separated himself from the crowd of crusty, post-punk screamo bands with banjos to become a professional touring act capable of breaking into the next level. Like his music or not, Bob Wayne has arrived and can put on one hell of a show. 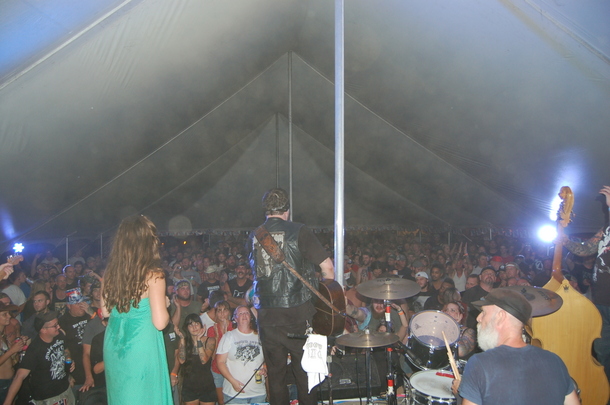 Lucky Tubb is not just another famous name. He’s bursting with authentic, classic talent, and wields one of the best voices in country music by combining cadence and style. Sometimes discipline can keep this from being evidenced in full force, but when he’s on, he’s on. And he was on Halloween night and so was his excellent band, with the added bonus of sharing the stage with the legendary, 90-year-old Don Maddox of the Maddox Brother & Rose. (see videos and full review) 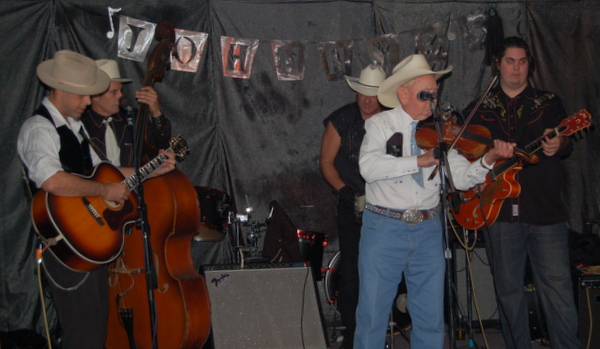 I can’t say enough about these bands, and at this point I’m afraid to say anything more from fear of coming across as redundant. Every year when I talk about live bands, they topped the list. And they will continue to top the list of bands you must see, except for Th’ Legendary Shack Shakers who at least for the moment are no more, giving you even more reason to make sure you see these bands live any chance you get because you may not get another. Slim Cessna’s Auto Club, Th’ Legendary Shack Shakers, and The Goddamn Gallows are as good as it gets live. 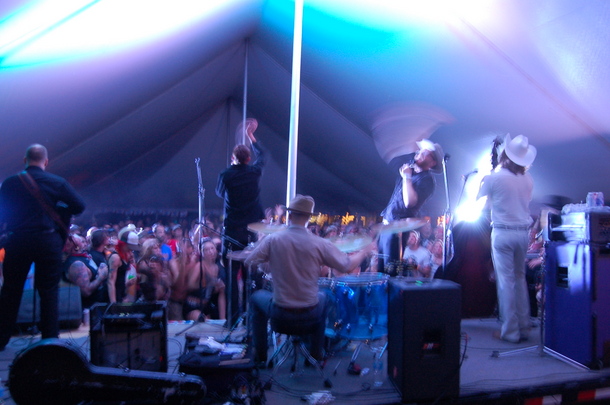 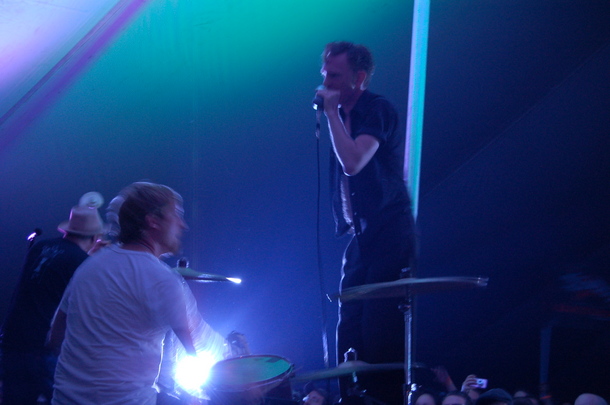 One of those “you had to be there” moments when Joe Buck, surrounded by a sea of his fans chanting every word of his songs, created one of those magical moments of musical camaraderie. 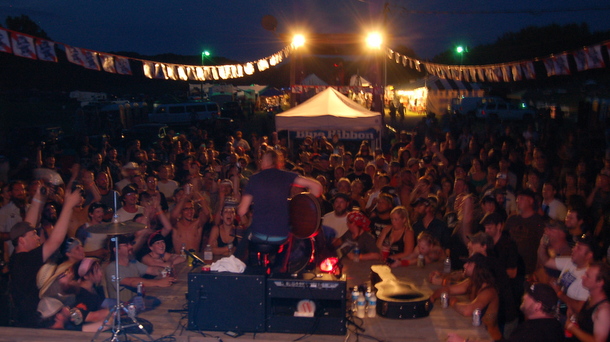 This is a touring combination I had wanted to catch for a long time. To hear Glossary is one thing. To hear Austin Lucas is another. And then to hear them together is completely something else. It is two autonomous music acts that you swear were built to compliment each other. There is no better way to experience Austin Lucas than with Glossary behind him, and there’s no better band to hear before Austin Lucas than Glossary. It is because they both build their music from the songs out, but still give such great attention to the live performance, and their styles of roots and rock take the same approach and blend perfectly.

I’ve been open about my reservations about the retooled Sturgill Simpson following the dissolving of his previous band Sunday Valley. Putting an acoustic guitar in his hands seemed like such a travesty after experiencing Sturgill in the raw with the electric guitar and the country music power trio. But however exciting it was, it was a hollow experience for Sturgill in the long run. Many songwriters covet the idea of being listened to instead of heard, but Sturgill actually has the talent to have one of his best tools taken out of his hands and still command an audience. Now Sturgill is making you listen, betting himself to see if he can hush a room, and winning that bet. (read full review)

“People first, then music” is the mantra on this site, and it is such a blessing when you discover people who are just as inspiring as the music they make. Such is the case with the Anderson Family Bluegrass Band from Grass Valley, CA. Hovering above the fray of most stock family bands and stock bluegrass bands, there is a realness to their music that sets them apart. Yes, their set lists include many standards you would expect from any bluegrass band, but then they’ll completely surprise you with some spice, like Iris Dement’s “Our Town” or Hank Williams III’s “D Ray White.”

I went to the Scott Valley Bluegrass Festival hoping to catch the Anderson Family’s set and shake their hands, and the Anderson Family ended up making me feel like one of the family for the weekend (Trigger Anderson, if you will). The music is excellent, but this is just the excuse to get you to pay attention to the profound warmth and by-gone family strength the Anderson Family conveys. (read full review)

There are two types of primary music experiences: visceral and carnal. Uh yeah, this one would be firmly ensconced in the carnal category. A Restavrant set is like a physical, violent assault on your personage that in some weird, masochistic way you addictively crave.  I don’t think I still have fully processed exactly what happened on that stage. But rest assured, if I had another chance to see these chaps perform, I’d blow paychecks and cross state lines to put myself in harm’s way and let them run me over like a barreling Mack truck again and again. Restavrant has always been an amazing live experience, but with the addition of drummer/junk smasher Tyler Whiteside, it’s downright out of control. 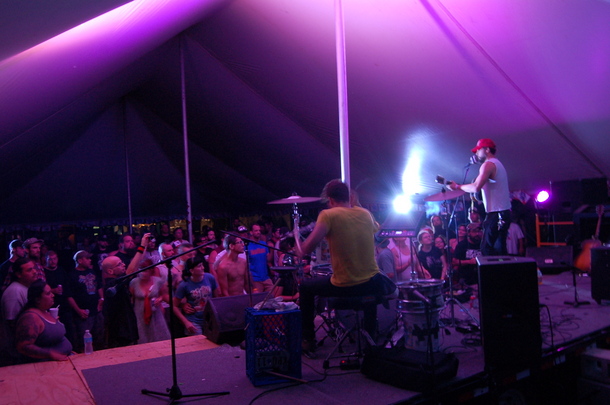 It goes without saying that any time you get to see a true music deity on stage, it will be memorable. Sometimes when this happens, especially with a performer in their 80’s, you have to go in knowing the performance itself may not be the greatest, that they’ve aged beyond their abilities, which will happen to us all. What made Ralph Stanley’s set at the Muddy Roots Festival so memorable is how his band had really thought out how to take a legendary performer who was probably is no longer fit to put on a full set of music himself, and still make you feel like you were taking in a performance from him in his prime.

But true music lovers live for those extremely rare moments when everything comes together, the sky parts and the world hushes, and the very fabric of human experience bends to the will of a truly magical musical moment. That my friends is what unfolded when Ralph Stanley stood in the center of the Muddy Roots stage looking out across a disheveled, soaking wet sea of rednecks and post-punk refugees who all fell as silent as the day after the end of the world when Ralph Stanley recited “O’ Death.” Your goosebumps got goosebumps. And for that brief moment, all of it, all of the reasons we live and struggle, the importance of friends and family and community, and everything we do to ensure music is a part of our lives, the sacrifices, the money, the travel, all came into full reflection.