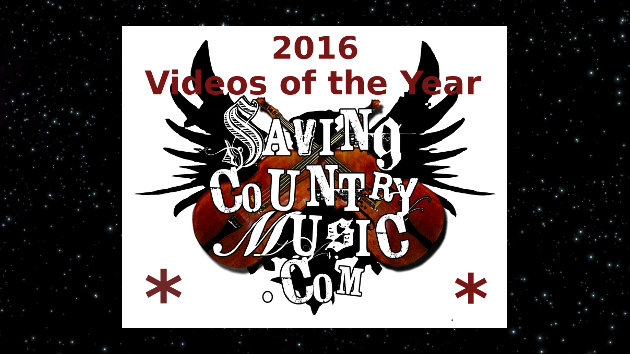 The art of the well-made music video—one that can match the inspiration of a song—seems to be a dying art these days. In 2015, Saving Country Music didn’t even post a “Best Videos” montage because there weren’t enough to highlight. However 2016 came in with some hard and heavy hitters, and even though the second half of the year has trailed off significantly, the videos at the top of the heap are so good, they’re certainly worth revisiting again.

Just like Saving Country Music’s Song of the Year candidates, this is not just about entertainment, this is about putting together words, music, and in this case, a visual representation, that can shake the viewer out of their daily routines and make them realize something that previously was either lost or never discovered about themselves or their world.

Please feel free to share the videos that touched you in 2016 below.

Singer-songwriters can sing about things such as love and loneliness as well, but their true trade is in being like a reflection pool of the present day, questioning our modes of life and the perspectives we keep. They are the poet’s of modern times, saying things we all know deep in our hearts, but in a way that awakens our inner selves and reminds us to take stock, re-evaluate our current course in life, or the ideals we hold to.

Like his singer-songwriter forefathers—sometimes posing as many questions as answers, but in a way that leads to understanding—Tim Easton has something to say on the American ideal, and how we’ve let forces outside ourselves drown out the inner voice. It’s the singer-songwriter’s perspective that’s able to drift above the grid of mundanity and ask the serious questions about our direction as people, and in a way that’s articulate and entertaining enough that it forces us to listen. It’s the word play and rhyme that pulls you in, but it’s the message that lingers. (from the review of American Fork)

Perhaps similarly to Lew Card’s “Condo Town Rag,” The Accidentals’ “Sixth Street” may resonate for those within the Austin mindset to a greater degree, and specifically for people who have an experience with the annual event known South by Southwest where this video was shot, and the song was inspired. Long ago getting out of hand, SXSW in some respects now is a shining example of the decay of humanity. Though the video begins as a relatively normal travelogue-style video, the scripted scene at the end, along with the brilliant songwriting of “Sixth Street,” collaborate to convey a chilling lesson of how we let everyday mundanity shake us out of our humanity, and forget the bonds with our common man.

“Sixth Street” is not obvious. But the lesson is really important to heed.

Chris Stapleton’s “Fire Away” is wetting tissues and disturbing workdays all across the country with its candid and gripping portrayal of suicide and mental illness in the see-saw world of a bipolar reality. We already had a good sense that Stapleton’s “Fire Away” was about heartbreak, but the heartbreak portrayed in the video directed by Tim Mattia takes it to an entirely new level. The manic, then depressive moods are evidenced with biting, ghostly accuracy in a well-crafted short where Stapleton plays a bartender early on, and then lets the professionals do the rest. It’s hard not to get pulled in as the drama unfolds from the very real recollections we most all have of when mental illness resulted in tragedy in our own lives.

#1: Evan Webb and the Rural Route Ramblers – “Dry Up or Drown”