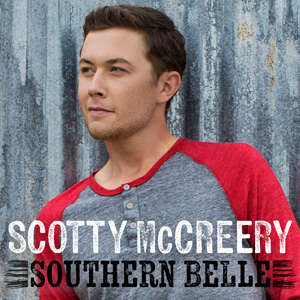 Scotty McCreery’s “Southern Belle” is the single that just won’t die. Originally released in mid August as the lead song from his TBD 3rd album, the song never gained any traction whatsoever, and now is apparently trying to be resuscitated with the release of a new video.

Whenever you’re out in front of a release apologizing for it, it’s never a good sign. “This is probably about as far left as we’ll go,” McCreery announced ahead of “Southern Belle,” tipping listeners off that this was going to be the moment the 22-year-old tried to make a big splash on radio in lieu of sticking to sometimes more traditional-leaning material that compliments his deep country tone. Then they threw a big unveiling party on the Fox & Friends morning show complete with Scotty unabashedly performing the song to an obvious backing track, and the whole thing just fell flat.

McCreery himself knew he was striding out of his comfort zone and established sound with “Southern Belle,” but like we’ve seen play out so many times in 2015, the result did Scotty absolutely no commercial good. “Southern Belle” scratched out a meager #48 showing on the Country Airplay chart, and that was it. And now it’s just re-entered the Mediabase Top 50 upon the second push, but does anybody really think this is going anywhere?

On “Southern Belle,” Scotty proves he can be just as objectifying as the rest of country music’s major label male stars. The song plays out like a high school wet dream, not saying much aside from crushing on hot chicks from the South with clichÃ© lyrics about sweet tea and honey biscuits that interchange food products for female body parts, because in the end they’re all just a bounty for Scotty to feast on. Then a line about “blue jean dreams” emerges, and then “My baby swingin’ low is makin’ me high” which I’m just going to puff my chest out and unabashedly assert is McCreery code for oral sex and see if anyone has the material basis to challenge me. It all got this music listener pretty hot and bothered, but not for the intended reasons.

“Southern Belle” is nothing more than a dance song with a bass beat, a token banjo part, and an acoustic facade, but there’s this descending chord part at the beginning of the verses that may have some considering it as slightly redeemable. However this exact descending chord progression was first used on the song “Collage” from the Joe Walsh-fronted project The James Gang. Frankly I’ve always considered “Collage” to be Walsh’s greatest songwriting accomplishment. Brilliant lyrics are complimented by the cascading chords in a collaboration of sound and sentiment. Lifting that chord structure for this “Southern Belle” mess is like musical heresy.

The video for for song reinforces all the concerns about it, and once again Scotty is out in front of it trying to play spin doctor. He said he didn’t want the girls in the video to be “eye candy,” and says, “Obviously they’re pretty and everything, which is awesome, but it’s showcasing how strong they are.” Oh come on Scotty, if you’re going to release a booty shaker, and least freaking own it. Are you really trying to say this video is complimentary to these girls’ “strength”? There’s exclusive, gratuitous ass and thigh shots. Hey, I like pretty girls too. Lots of folks do. But I’d have more respect for it if you’d just call it what it is.

The worst part about “Southern Belle” is it’s not Scotty McCreery and he knows it. It doesn’t matter how catchy a beat is, how buzzy the buzzwords in your lyrics are, or how fetching the cheerleaders look in your video. If you’re being disingenuous in 2015, the country music public is going to sniff it out. Florida Georgia Line and Thomas Rhett can get away with this stuff because they don’t know any better. Scotty McCreery does, and so do his fans. We’ve seen this play out with Eli Young Band, The Band Perry, Gary Allan, and half a dozen others. Just going pop is not a guarantee of success. In many cases, it’s a recipe for failure.

Now, just like other projects with lead singles that flopped, McCreery’s new album is in indefinite TBA stasis. We’re not talking about a brand new artist trying to gain traction. We’re talking about an artist with an established career and a grassroots fan base that can’t crack the Top 45.

There’s lessons all over the place with these failed lead singles in 2015. The question is, will anyone listen to them, or just like these singles, will they go ignored?