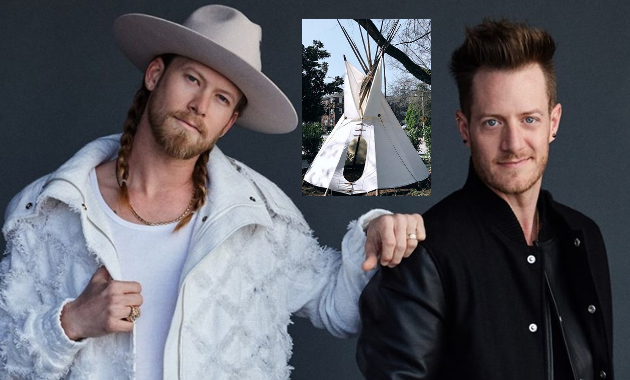 That’s right, I’m going here. And no, it’s never cool to put your hands on another man’s shit, so don’t @ me because that’s not what I’m getting at. But the idea that somehow Brian Kelley of Florida Georgia Line and his wife Brittney are victims simply because someone peeled the skin off of their stupid-ass tepee in front of their stupid-ass boutique chic clothing store in the upper crust part of Nashville to the point where the local news and Rolling Stone feels the need to cover it, and a public dragnet has been deployed and a $5,000 reward has been offered to catch the perpetrators, is so laughable it’s ridiculous, and about the perfect illustration of what a sheltered and coddled world these people come from.

On Saturday night (11-3), four individuals were caught on camera in front of the “Tribe Kelley Trading Post” in the hoity-toity Hillsboro Village neighborhood of Nashville disrobing the store’s yard art teepee, and one perp (probably drunk) trying unsuccessfully to yank the poles down before they go scampering off to smoke pot in their dormitory. Now we’re supposed to be shocked at what the world is coming to, while Brian Kelley is taking to Instagram to decry the incident and search for the criminals to bring them to justice.

Brian Kelley claims that the group was trying to steal the teepee, but I just don’t think that’s the case. Tribe Kelley is located right between Vanderbilt and Belmont Universities in Nashville. At 1:30 on a Saturday, these were likely college kids (and look like that) who either thought it would be funny to tump the teepee, or they were social justice types indoctrinated in gender studies classes who saw the structure as a gross example of cultural appropriation (which it probably is), and decided to make a statement.

Either way, nothing was stolen, and nothing was seriously damaged. “Vandalism” may even be a strong term to describe the incident. Whether it was a silly prank or someone’s form of social expression, it’s a stupid incident not to make a bunch of noise about, except for the fact that it is exposes jut how coddled the Florida Georgia Line crew really is.

The Tribe Kelley Trading Post is an ultra-exclusive boutique clothing store that Brian Kelley helped his wife start. Among other things, it sells those stupid jeans we always make fun of pop country entertainers like Florida Georgia Line for wearing because they come with rips and fades manufactured into them, and cost $220. That’s literally what Tribe Kelley trades in—$220 jeans with fake rips in them.

And yes, folks can get way too uptight when it comes to the tenets of cultural appropriation, and we shouldn’t fall in that same trap. Often when Native American culture is presented, it is done to respect and honor North America’s indigenous people, and that’s an important part of keeping their legacy and heritage alive. Even when people dress up as Native Americans for Halloween for example, they’re not necessarily stealing or lampooning someone’s culture.

It’s also worth noting that Brian Kelley’s wife Brittney professes to have Native American blood, and grew up in Indian Springs, Georgia and studied Native American history in college. She chose the teepee as a symbol of their business because she believes it’s a symbol of communion. Fair enough, and something perhaps the social do-gooders should have taken into consideration, if that was their underlying motivation.

But Florida Georgia Line is possibly the perfect example of where cultural appropriation crosses the line. They’re a couple of private school-heeled lily white suburban kids of privilege, tethered to indoor plumbing, manscape products, and fashion clothing design, that have made their entire careers off of ripping off hip-hop and homogenizing it, tractor rapping with Euboic inflections and urban gesticulations, all while prancing around in jeans made to look like they’re from working-class stock. Lump appropriating Native American culture into ultra-expensive high fashion boutique shopping, and it’s just about enough to make you empty your stomach.

And seriously, we’re all fucked if our young ones can’t even participate in petty crime anymore without making national news. There’s a camera everywhere you turn, and it’s part of a repressive society that doesn’t allow young adults to fuck up and learn, which is essential in the development of the frontal cortex. Brian Kelley’s crying about some drunk students dropping down a piece of canvas wrapped around some poles, and if they’re caught they’ll be paraded as criminals instead of pranksters. Meanwhile folks in east Nashville are sitting on their front porches, watching as their entire communities and cultural landmarks are being bulldozed to make way for gentrified modular bullshit, perpetrated by the kind of people who would patronize a place like Tribe Kelley in Hillsboro Village.

And yes, I know I’m making even more of this stupid incident by going on about it myself. It’s just a stupid teepee, right? But honestly this “incident” exposes so much more, which is the artifice behind what so much of society and country music is becoming today. And if you want to see making too much of it, check out Brian Kelley’s Instagram Post about it. “Nashville tribe, let’s band together and find these people … Chief Kelley on patrol now, baby.”