Song Review – Jamey Johnson’s “You Can” 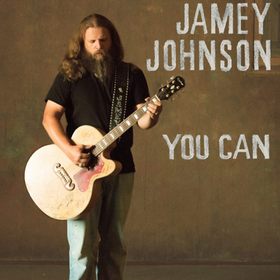 Like the upright bass player from a Tom Waits tour was unexpectedly filched off the bus as it rolled through Nashville, then thrown into a studio and told to do his worst, “You Can”—Jamey Johnson’s second official single from his freshly-launched Big Gassed Records—starts off with a smoky jazzy run of woody bass notes, leading into an almost big band sound, making this track unexpected from the traditional country singer and songwriter if nothing else.

Written by Johnson and Dan Couch somewhere around 2004 or 2005, “You Can” was kept on the sidelines as Jamey’s major releases The Dollar, That Lonesome Song, and The Guitar Song came out, never making the final cut. But now that Johnson is out from under the thumb of the industry, if he wants to randomly release a single on a cold day in February, he can. Whether it suits his best interests or not.

More indicative of Lyle Lovett or Wayne “The Train” Hancock instead of Jennings and Jones, “You Can” is a throwback, neotraditional country swing number with many of the markings thereof, including the propensity of the lead players to all play at the same time, and the playful bass interludes and intro that give the track its most fetching character. All that said, while in the midst of the chorus, the song still feels very much at home in a honky tonk with its fiddle and steel guitar.

The words of “You Can” are playful, striking some strong wit here and there, and aiding the song with their rhythmic, pentameter-heavy approach. But they’re not going to win any Pulitzer’s either, and the lyrical approach is not particularly original. The big band style of this song is where it earns most of its points.

One of the knocks on Johnson in the past, at least from this sector of the music press corps, is that his albums and live shows lack a bit of spice. A track like this is just the dash or paprika a potential album project could use to keep the ear attentive, and illustrate how Johnson has the dexterity to amble into something more upbeat, with an alternate mood from his usually dour fare. But you still get the feeling “You Can” would best be suited as a gear-shifting album cut instead of a featured single. It’s good and fun, but nothing to go gaga over.

Or should we consider “You Can,” and his first new song “Alabama Pines” as singles at all? Is there any effort underway to get these songs on the radio? Isn’t releasing these two songs so close together somewhat self-defeating if this is the case? Or is Johnson just flexing his freedom muscles?

It’s great that Jamey now has the latitude to release songs randomly, but is this the best way to approach sharing his intellectual property? In the end, even the most fiercely independent music artists still have a marketing arm and a promotional push with singles and other such material. Sure the modus operandi of the music industry is plodding and outmoded, but in many ways it still works, and has its purpose.

“You Can” is a nice little unexpected nugget from a favorite son of real country music whose creative output went too long unheard. But how long people will be listening to “You Can” unless it finds its way onto an album is a question.

“You Can” is available on iTunes, and nowhere else. No word on when a new album may be coming.