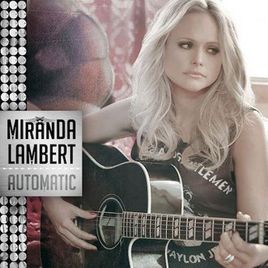 The distinctive, woody tone of a small-bodied, nylon string guitar draws you into a new single from country music powerhouse Miranda Lambert—presumably the first song from the much-anticipated new album, creating a heightened interest around the offering than would regularly greet a new single.

The title “Automatic” might get some revved up for an old-school woman-scorned revenge song that was the signature of Miranda’s early career, hoping weaponry will be brandished or tires will screech while a foreboding cigarette cherry glows from the shadows. But instead Miranda delivers a cool-headed, warm, reflective, nostalgic piece, very much in the sentimental realm of country music’s remorseful view of the changing times, waxing tropishly, but effectively on what we’ve given up as progress and priority has marched on.

Written by Miranda, frequent collaborator Natalie Hemby, and The Voice contestant Nicolle Galyon, the song refers back to outmoded artifacts of life like pay phones, Polaroids, and postage stamps, while not being patently about these items themselves like so many of the laundry list offerings from country music’s opposite sex, but the sentimental reflection on these bygone mementos as markers of a dying past, a wayward present, and a gloomy future, glued together by the weighty line, “‘Cause when everything is handed to you, it’s only worth as much as the time put in.”

“Automatic” starts with the earthy, rhythmic strumming of a single guitar accompanied by a bass drum, then additional rhythm is added during the second verse; a sort of crunchy boom-clack sounding back-layered track that could either be digitally generated, or real tones rendered through some vintage filtering, giving “Automatic” a little modern-day relevancy while not leaning on the rhythm to make up for lyrical shortcomings.

Strings float in—again, somewhat ambiguously derived from woods and wires, or ones and zeros—but effective in getting the song to crescendo consistently throughout, while smart chord selection helps breed the desired, nostalgic mood. The chorus rises, but in a tempered, tasteful manner, and is effective at highlighting the signature tones of Miranda’s award-winning voice.

Why “Automatic” is so important is because we wait to see how the women of country are going to handle the continued march toward idiocy the men of country continue to illustrate, and as the lead feline, Miranda sets the pace. “Automatic” is somewhat safe country pop, but the sentimentality it is able to evoke is very real.