Really Tim McGraw? Really? After 20 years of slaving under the oppressive control of puppetmaster Mike Curb, this is what you do with your new found freedom? Wow.

With the first single from the Big Machine Records-era of Tim McGraw, the country music mega-star pulls off the biggest sellout move of his career, and one of the biggest sellout moves ever seen from an established country music franchise name. Yes friends and neighbors, Tim McGraw has fallen prey to the hyper-trend of the country music laundry list truck song. “Truck Yeah” is such an overt outcry for relevancy and commercial acceptance, I feel embarrassed for McGraw simply from writing about it.

When you boil this song down, it’s a rap song, and a bad one at that, just like so many of these country checklist songs. There’s no story. Instead the song just spews out stereotypical artifacts of culture while hanging on one single monotone vocal note with minor variations. This song is a product of the mono-genre. It’s a club dance song. Countryisms and urbanisms are belted out by McGraw with no delineation between the two. He talks about crew cabs and clubs downtown. DJ’s and rednecks. And then there’s the line, “Got Lil’ Wayne Pumpin’ on my iPod.” And add on top of all of that the stupid cornpone title lyric and the fact that it’s yet another mainstream song about trucks and you have a super-fecta of pop country suckitude. 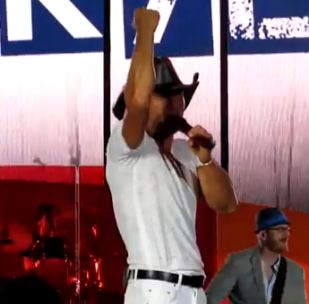 And I hate to be a hypocrite and cite the morality of the situation, but since this song is being put out on the public airwaves, why not ask the question of where the line is? Kids aren’t stupid, despite the best efforts of public schools and popular media. Kids know what McGraw is implying here. And in the live version, he even thrusts his fist in the air like he’s flipping the bird at the crowd. Most people see the country station as a refuge when the kiddos are in the car. Or at least they used to. It’s bad enough most of the music young brains are being barraged with is in such poor taste. Now we have to worry if it’s morally straight.

The worst part about this song is Tim McGraw knows better. We expect this dumb shit from the Justin Moore’s and Brantley Gilbert’s of the world, but from Tim McGraw? Say what you want about his music, that it’s boring or country’s version of adult contemporary, but aside from his idiotic “Indian Outlaw” song, his career has been marked with depth. And in McGraw’s defense, we haven’t heard all of the new material he’s been recording for Big Machine, and this may be the worst of the lot. But man, I just can’t see how anybody can look at this song and not say “sellout”.

Somewhere Mike Curb is sitting behind a desk, maniacally stroking a cat sitting on his lap and cackling. There’s a reason country labels see it necessary to hold such a heavy thumb on artists. This song could perform like Kip Moore’s “Something About a Truck” which became a #1, or it could be like Track Adkin’s “Brown Chicken, Brown Cow” or Craig Morgan’s awful “Corn Star” and bomb. I think there will be high initial curiosity about this song, but it also runs a big risk from both being controversial and polarizing, and for venturing so far out of McGraw’s established demographic.

And why? Why this? Why now? Tim McGraw is selling out arenas and has songs climbing the charts on country radio. Does he not have enough money or attention? Why risk being labeled a bit singer like Trace Adkins or a douche like Brantley Gilbert?

Just be yourself Tim.