Song / Video Review – Kacey Musgraves & Willie Nelson’s “Are You Sure” 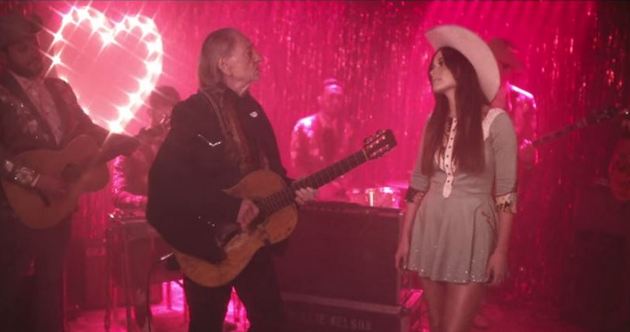 Kacey Musgraves released her sophomore album Pageant Material earlier this summer, and just recently turned 27-years-old. And for all intents and purposes, her era of relevancy on country music radio is already over.

Or did it ever really begin? Looking back now, “Merry Go ‘Round” was more of a fluke than a phenomenon on the format, and eventually the odds got even with Musgraves. The oligarchy that controls the country airwaves has tightened their iron grip to make sure an artist like Musgraves can’t get through, and Grammy awards, Song of the Year trophies, and Best Album accolades don’t impress program directors charged with making sure every single minute on country radio is maximized to appeal to the mass consumer.

As the reigning Song of the Year winner at the CMA Awards, Kacey couldn’t even get her first single from Pageant Material “Biscuits” to crack the Top 40. It didn’t help that the song was released in March, and the video didn’t emerge until June when the song was already done—one of many timing issues and other less-than-ideal decisions that have possibly set Kacey’s prospects back even more than her “critical darling” tag. The second Pageant Material single “Dime Store Cowgirl,” though probably a more savvy pick than “Biscuits,” still faces an strong uphill battle to success now that so many Musgraves singles have stalled.

So why even try to court radio? Why blow your budget barking at deaf ears? Instead run off and make a fun video with Willie Nelson on a track that was hidden on the record, and give something your core fans, and the core fans of country will enjoy.

It’s curious how some can still characterize Kacey Musgraves as the brunette version of Taylor Swift when she’s cutting classic country songs and collaborating with Willie Nelson. “Are You Sure” is not some standard of the country songbook, and simply picking the tune shows Kacey’s depth of country nerdiness. “He couldn’t believe I knew it,” Kacey says, recalling the time she was on Willie’s bus and asked him why he never plays it live. “I just really loved it. It’s very honest and very country, [and] it’s a neat perspective. He seemingly pulled a guitar out of a cloud of smoke and started strumming. I was of course dying inside a little bit.”

Some of the best cover songs are not the ones that are easily-recognized by the audience, but the ones that didn’t receive their due credit the first time around. This is the case with “Are You Sure,” which can stand right beside other iconic Willie songs from early in his career like “Night Life” and “Hello Walls” to be considered timeless in their message. The arrangement of Kacey’s rendition is tastefully sparse, and respectful to Willie’s sensibilities, going with a nylon string acoustic guitar and simple drums, and of course, all is made heavenly by Willie’s active participation both by supplying leads on his famous guitar “Trigger,” and vocal accompaniment in duet form.

Willie’s presence is also what makes the video stand out. The video is a little furtive in the beginning about if Willie will show up at all, and then there he is at the bar, and then joining Kacey on stage. Everything’s better with Willie—he’s like the bacon of country music.

Kacey will continue to be ignored by the mainstream, and draw the ire of speculation from the traditionalist crowd. But that doesn’t mean her contributions aren’t worthy of being seen and heard by both.

P.S. – The bar in the video is the The White Horse—Austin, TX’s current hot honky tonk that is quickly putting together a legendary status for itself.

Are You Sure, Kacey Musgraves, Review, The White Horse, Willie Nelson