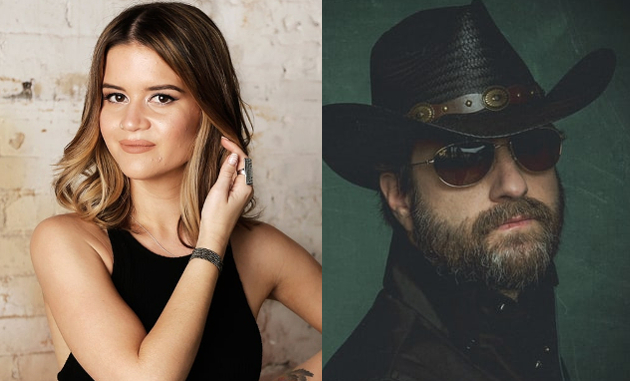 Dirty country comedy personality Wheeler Walker Jr. just released his sophomore album Ol’ Wheeler on Friday (6-2), and it will be competing for the #1 spot on the country albums chart, as well as a Top 10 showing on the Billboard 200 this week, but it will be without a high-profile collaboration that was supposed to make the record, but got scrubbed last minute by Sony Nashville.

Upcoming country starlet Maren Morris, who’s been making waves of her own with a #1 song and Grammy win for “My Church,” was supposed to appear on Wheeler Walker’s duet “Fuckin’ Around.” Despite the racy name, it is one of the tamer tracks on Wheeler’s new record. Maren even recorded the track with Wheeler, and Sony Nashville originally signed off on the collaboration. But at the last minute, the label apparently got cold feet, and permission was pulled.

The song still made the record, and with a duet partner. Though it’s credited as “Kacey Walker” singing on the track, many independent country fans will recognize the voice of east Nashville’s Nikki Lane on the song. However the last minute switch did cause drama for the Wheeler Walker camp, necessitating a delay in the pressing of vinyl for the project along with other production issues.

“Sorry again that vinyl is going to be late. Did ALL we could,” Wheeler Walker Jr. tweeted out on Friday, June 2nd. “Any complaints, send ’em to Sony Nashville. Long story, but their fault.”

Fans who were able to secure a physical copy might have noticed a veiled reference to the issue in the liner notes for the album. Thanks is given to “Maren ‘Maybe Next Time’ Morris”. Though Wheeler Walker and Maren Morris might seem like an odd couple to some, they actually shared the stage together this time last year at a show during CMA Fest, with Morris singing backup for one of Walker’s raunchy songs.

Sony Nashville’s decision to yank Maren Morris’s participation on the record came right at the same time Wheeler Walker Jr. was yanked from pre-order site Pledge Music due to the adult nature of his music. Walker made veiled references to production issues beyond Pledge Music in late February, but no reason was given.

“A MAJOR record company has tried to halt production of my new record,” Wheeler said on Twitter. “Nashville is officially ‘scared.’ But I will get the album to you. They know I will bring down the Music City Machine. This is war now. And I will win. They want you to open wide and shove the new Florida Georgia Line/Backstreet Boys shit down your throat. Fight them and listen to Wheeler.”

The issue also might dovetail with an Op-Ed Maren Morris published on Lenny Letter in April, where she talked about the struggles of being a country music performer who happens to be female.

“The frustration I’ve had with the perspective of women in country music is that you either have to sing about being scorned by a lover or sing about thinking a boy is cute and wanting him to notice you. That’s about as edgy as you can get,” says the Op-Ed. “I write about sex and the self-inflicting pain of being the asshole at the end of a long relationship, being young and drunk with your girlfriends, or just having a meaningless but fun (and sometimes necessary) fling. Things that don’t always make me look like a puritan saint, but they’re unflinchingly honest, and I couldn’t write it down on paper or sing it unless I went through it personally.”