Steel Resolve: How Hearing Issues Led to Sharing A Passion for the Steel Guitar for One Player 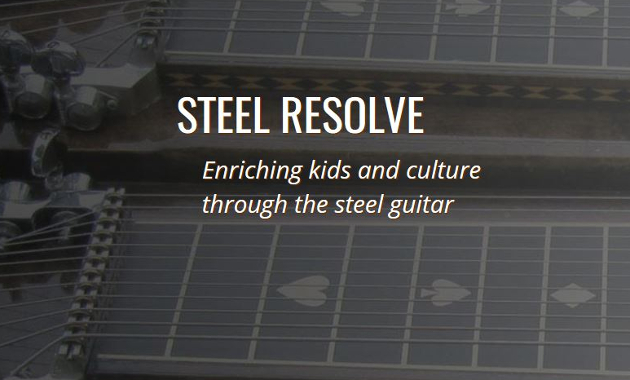 Imagine finding something that you believe very well might be your true life’s purpose and passion, only to have it snatched away from you via physical ailment. That is the story of Josh Killian from Kennesaw, Georgia, an amateur steel guitar player turned founder of the new nonprofit called Steel Resolve, who has decided to personally take on the task of saving the iconic country music instrument from the endangered species list.

“I began playing the pedal steel guitar about three years ago. I’d always loved the sound in all sorts of different music. From country, to jazz, to California country in the 70’s, and I finally just decided I was going to start playing. I Googled steel guitar teachers, and only three names popped up in my area, but one was a name 10 minutes down the road from me, a teacher named Tommy Dodd. He’s a great player and an awesome teacher. I started taking lessons and got completely addicted to it—the complexity and everything you can do with the instrument. I found myself playing every waking hour that I had free. I was practicing three to four hours a day. I thought, ‘Hey, this might be what I want to do.'”

It was a strange decision to come to for someone later in life, and just starting a young family in an Atlanta suburb. But as many steel guitar players will tell you, your passion for the instrument must become an obsession simply just to learn the basics of navigating the instrument, let alone how to master the complex and obtuse techniques and tunings that make the steel guitar one of the most unique and difficult instruments to play in all of music. Then after a year of attempting to learn the steel guitar to a professional level, life threw Josh Killian a curve ball.

“I started getting a ringing in my ears. I thought it was from playing too much and too loud. I went to have it checked out, and it turned out I had Meniere’s Disease. Ryan Adams had it, and it cleared up for him thankfully, Lloyd Green, the legendary steel guitar player had it. It put him out of commission for ten years. It’s a degenerative ear condition that causes loud ringing and vertigo. It just makes it really uncomfortable to hear loud noises, especially piercingly loud noises, which of course the steel guitar makes. And also playing a fretless instrument, you have to be able to hear perfect tones in your ear to stay in tune. Basically it’s the worst diagnosis you could get for playing the steel guitar. Of course that was really demoralizing.

“I had practiced over 1,000 hours that first year. I was depressed, and still trying to practice some when it wasn’t flaring up. But after a couple of months of being depressed and feeling sorry for myself, I decided, ‘Josh, you were probably not going to be an all-time great steel guitarist anyway. But maybe you could still do something to be involved with the steel guitar and help others achieve that goal of being a great player.’ I figured I could have a much greater impact doing something to help others and get involved playing the steel guitar than just playing alone.”

That is where the idea for Steel Resolve came from—a way for Josh Killian and his fellow steel guitar enthusiasts and teachers to take their passion for the steel guitar and share it with others, especially younger individuals with a passion to learn the instrument. As Killian explains, there is a reason the steel guitar has virtually disappeared in popular culture beyond its deprecated use in modern pop country songs, even while the interest in instruments such as guitar and fiddle are increasing in student-aged musicians.

“Typically, the cheapest pedal steel guitars you can find used are $1,500 to $2,000, and that’s not including the amp and everything else you need to get started. It’s just a really hard instrument to get into. It’s cost prohibitive to 95% of the population, but if you can get kids that can start at 12 or 13, we’ll start having steel guitar prodigies like we have in the guitar world. I think we could do wonders for the imagination of the steel guitar. Having more players, and more people familiar with it, hopefully it will get more steel guitar players into bands, especially country bands.”

The idea behind Steel Resolve is simple: find kids with a passion for learning steel guitar, and match them up with the equipment and teachers to allow them to explore that passion. Many times proximity to a teacher is as big of a hurdle as finding an affordable steel guitar to learn on. Steel Resolve tries to resolve those issues for passionate students.

“It takes a lot of faith to ship off a $1,500 guitar to a kid. And if you’re doing that, you want to make sure it’s not for their parents, it’s not for their girlfriend, it’s not anybody but them. And even then, kids change their minds. Obviously if we can get local teachers with these kids, that’s preferable. But I took some lessons from John McClung, who’s an old school California player who’s played The Palomino and such, and he had Skype lessons available. You feel like you’re right there. When I met him for the first time in person, it didn’t feel like the first time we met face to face. I felt like I knew him. I was excited about that because a big issue that kids have is there is just not steel guitar teachers around, sometimes even in big metropolitan areas.”

Over the last year, Josh Killian has been building the back end infrastructure for Steel Resolve, securing all of the governmental paperwork to officially register as a nonprofit, and testing out the system with real students.

“The first student that we had, he already had a steel guitar, but he was super frustrated with where he was. He was a trumpet player in band, he knew all the theory, and we knew he had the drive, and he took lessons from John McClung, and it was like a light switch just turned on. And he went from being frustrated to now he’s going to Nashville to look for schools where he can minor and study the steel guitar.”

Steel Resolve’s first student was named Jonah Turner, who is currently a senior in high school.

“Steel Resolve connected me to the best written and personal instruction available to steel guitarists today,” says Jonah Turner. “Josh Killian and Steel Resolve also was the single best encouragement I received in my steel playing, and it made me believe in my future as a steel player.”

Now Steel Resolve is actively looking for more students who display a serious passion for learning the steel guitar, who maybe have at least some knowledge of music theory or already know another instrument, and are willing to commit to the program for a full year. In the future, Steel Resolve hopes to throw benefit concerts and continue to grow to where they can have a small fleet of pedal steel guitars they can loan to passionate students, and plenty of teachers on call to provide lessons.

As for Josh Killian, he still dealing with his Meniere’s Disease.

“It’s never good. The only thing that is encouraging to me is that all the celebrities that have had it, they’re all back in the music business now, and it seems to have dissipated. The worst case scenario is that it gets louder and louder until you have complete hearing loss. That’s the typical arc of the disease. Right now I just deal with a lot of vertigo. The sound is still there. I still get behind the steel, but obviously I’m not going to be on a bandstand anytime soon.”

But perhaps some of the students and beneficiaries of Steel Resolve will, and the endangered instrument of the steel guitar can once again find thriving numbers in the population of musicians, and find renewed appeal with listeners.

“I’m just hoping we can help some kids have an opportunity they wouldn’t have before. And a great side note is, maybe we can get the steel guitar out there more, get the awareness up, and hopefully we will be hearing it in the music of the next generation.”