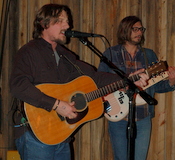 About this time last year, I was telling everybody that 2012 was going to be the year of Kentucky-born and Nashville-based singer / songwriter Sturgill Simpson. “Mark my words,” I said. He had a brand new, professionally-made album in the can featuring recently-minted Country Hall of Famer Hargus “Pig” Robbins amongst other notable contributors, and had signed with same manager as Marty Stuart and Kathy Mattea.

Now, sitting a stone’s throw from the end of 2012, it might be appropriate for me to eat those words. Or maybe even more appropriately, dig hard with the pen and overwrite that last “2” into a “3”.

It’s not that Sturgill didn’t have any highlights of 2012, not the least being opening for Dwight Yoakam in Mission, TX on December 20th for a huge, sold-out crowd. He also shared the stage with Jamey Johnson, and singed up with the huge Paradigm booking agency that books Dwight and fair number of other high-profile acts. It’s just that except for the single “Life Ain’t Fair & The World Is Mean,” that long-rumored album never saw the light of day.

“I’m real picky,” the shy, enigmatic, and reserved Sturgill explained when I went to see him play a last-minute pickup show at Austin’s west-side Rattle Inn on December 22nd. He’d been dodging my requests for an interview for days. “Let the music speak for itself,” he told me. But he did let me know that the plan at the moment was for the album to come out in June-ish. Despite the delays, his droopy eyes, and his hard-to-read countenance, he seemed really excited…inside.

I’ve been open about my reservations about the retooled Sturgill Simpson following the dissolving of his previous band Sunday Valley. Putting an acoustic guitar in his hands seemed like such a travesty after experiencing Sturgill in the raw with the electric guitar and the country music power trio. He played a Telecaster like nobody I had ever seen, like it was a bluegrass instrument, but with the liquid energy of amplified tone.

But however exciting it was, it was a hollow experience for Sturgill in the long run. It wasn’t him. I’ve described Sturgill in the past a a 5-tool musician. He can play, he can sing, he can perform, he can write, and he’s a good dude. But the balls-out presentation was diminishing attention from the songs and Sturgill’s singing. Many songwriters covet the idea of being listened to instead of heard, but Sturgill actually has the talent to have one of his best tools taken out of his hands and still command an audience. 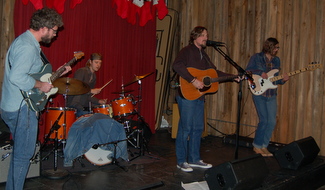 Make no mistake, the energy of Sturgill Simpson is still there, and in full force, including in his acoustic playing which is still highlighted by flourishes of Kentuckian bluegrass brilliance. But you can’t just sit back and wait for your face to be melted any more. Now Sturgill is making you listen, betting himself to see if he can hush a room, and winning that bet. By his end of his set at The Rattle Inn, I almost felt embarrassed for holding an initial grudge against acoustic Sturgill. He showed me, and so did his excellent band consisting of Miles Miller on drums, Adam Davis on telecaster, and late-era Sunday Valley holdover Kevin Black on bass.

They played a 90-minute set that consisted of quite a few covers from Texas artists to pay homage to where they were. Willie Nelson’s “Devil In A Sleeping Bag” was a special treat, and so was Waylon’s “Waymore’s Blues.” He also played some of the new material, and a very special 6-minute+ version of “Oh, Sarah.”

So in conclusion, screw Sunday Valley, Stugill Simpson solo is better…. Actually I’m kidding. What I really found was that inexplicably you can both love what Sunday Valley was, and what Sturgill Simpson has become. And don’t go thinking we’ll never see Sturgill with an electric guitar again. I think he just wanted to put the past behind and leave no doubt that what he is doing now is a new deal. And I for one am excited.