I had never heard of Sunday Valley until a few months ago, but for 6 years this guitar-driven country band has been making noise in and around Kentucky, opening for such acts as Th’ Legendary Shack Shakers. About a year ago, lead guitarist and singer Sturgill Simpson flipped the proverbial middle finger to his regular 9 to 5’er and decided to give the whole music thing a serious go, and the band put all their chips on their recent release To The Wind And On To Heaven.

First and foremost Sunday Valley is a live band, and that is how they approached this recording. The guitar is unapologetically loud and heavy–kind of the Stevie Ray approach of simply not worrying about what people say, just continue to do it until that is what you’re known for. This is about the loudest and heaviest you will hear guitar that still has the identifiable country “twang.” It reminded me a lot of the more guitar-driven tracks on Marty Stuart’s recent Ghost Train, but even more ballsy and bold. 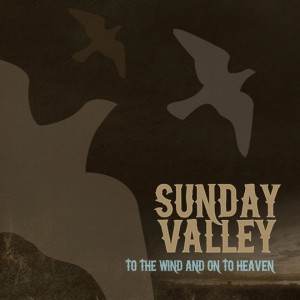 It’s not easy to capture the live energy a live band is known for in a recording, but To The Wind And On To Heaven does. I really wouldn’t characterize this project as “produced” or “slick” or “polished.” It is simply honest and fearless. And it is accessible. Listen, I know The Shack Shakers are not for everyone, but when you hear Sunday Valley, you think, “Now THIS is what they should be playing on 98.1.”

Along with their heavy-handed rockers, Sunday Valley mixes in a few slower, emotion-driven ballads that still take that same “all in, leave it all out on the stage” approach as the faster, heavier ones. Songs like “Oh, Sarah” and “I Wonder” prove that Sunday Valley is much more than a one-trick pony riding Sturgill Simpson’s fire-breathing telecaster to a short-lived fame. But man, the rockers like “Never Go To Town Again” are just too much fun, with guitar that is just a notch from what you might hear at a heavy metal show. Sturgill knows how to walk up to the line, but not cross it, keeping it solidly country.

Such a cool contrast is struck when Sturgill gets up on stage with his classic, dapper look, almost like a Kentucky-fried Joey Allcorn, and then starts wailing balls-out on the guitar. But don’t let the guitar work fool you, this is not southern rock, this is hard country, and Sturgill backs it up with a thick country incantation to his lyrics. As much as I like Sturgill’s drawl, the lyrics are not always clear, and it’s a shame, because once you slow it down a bit you can tell they’re heartfelt and true. Maybe a little more could have been done to distinguish the loud, heavy tracks from each other as well, but if you started to fumble with the vocals or inserted a producer into the project, you might lose that live feel that is the foundation of this album, and its greatest asset.

Gerald Evans on bass and backing vocals, and Edgar Purdom III on drums also deserve props. Sunday Valley may feel like chaos, but they move forward with a cohesiveness and confident ease, and that contrast adds to the band’s mistique.

Sunday Valley is definitely worth your consideration and raising a blip on your radar, because mark my words, I have a feeling that this will not be the last time you will hear about Sturgill Simpson or this band, from me or others.

Preview Tracks and Purchase To The Wind And On To Heaven