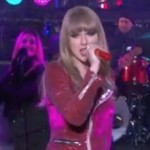 On New Years Eve, Taylor Swift was one of the exclusive, marquee performers for ABC’s Dick Clark’s New Years Rockin’ Eve hosted by Ryan Seacrest. And for a performer who has a history of off-key performances, Taylor delivered what might have been her worst live performance since her now notorious duet with Stevie Nicks at the 2010 Grammy Awards. Singing two of the most pop songs from her new album Red–“I Knew You Were Trouble” and “We Are Never Ever Getting Back Together”–the singer who is labeled country looked way more like a pop star, sporting black leather pants and a lipstick red microphone. 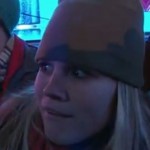 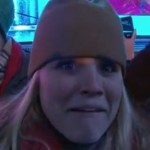 The performance was spotty throughout, but got slightly better from the beginning of “I Knew You Were Trouble” where Taylor was clearly struggling to stay in tune. The camera at one point found a Times Square reveler who looked like she has just swallowed a lemon in reaction to Taylor’s singing, while scores of watchers of the broadcast that boasts over 23 million viewers worldwide took to Facebook and Twitter to voice their displeasure–displeasure in Taylor’s singing, and confusion of why she is labeled country. 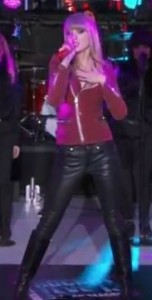 Meanwhile comedian Kathy Griffin on the CNN broadcast with Anderson Cooper went on an anti-Taylor Swift rant saying, “Can she stop complaining about her perfect life?” while throwing paper at Taylor performing on stage. She also called Taylor a “skinny whiner” who needed to “shut her mouth and count her money.” Griffin also accused Taylor of lip syncing and “using some sort of Auto-tune” but apparently Kathy wasn’t listening, because it would be hard to lip sync or use Auto-tune and be that out-of-tune at the same time. Similar misguided accusations of Taylor Swift using Auto-tune live have always been flatly denied by Swift.

Swift’s latest album Red released in October included 3 songs out of the 16 produced and co-written by the pop hitmaking duo of Max Martin and Shellback, but those songs constituted 100% of Taylor’s New Years Eve performance, and 50% of the singles released from the album so far. In November of 2011 I declared that I and other Taylor Swift critics had been wrong about the performer, but ever since the released of Red, Swift has done a complete 180, running away from the substance that made America fall in love with her as a sincere person and a good songwriter.

Swift has weathered these storms before. After her poor Grammy performance in 2010, she took inspiration from reading her critics and wrote the song “Mean” that became an anti-bullying anthem and won two Grammy awards. But this is starting to feel different. First off, Taylor says that she no longer reads her criticism or press. And second, if she continues only emphasize the more pop songs from her album, she will not have any substance to fall back on.

Kathy Griffin’s comments about Taylor Swift can be seen in the video below (mostly after the 13-minute mark).

can't sing, I Knew You Were Trouble, Kathy Griffin, lip sync, Max Martin, New Years, Off Key, Ryan Seacrest, Stevie Nicks, Taylor Swift, We Are Never Ever Getting Back Together