The Case That Taylor Swift No Longer Wants to be Country 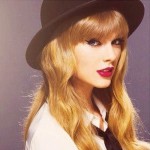 Last Sunday night’s Academy of Country Music Awards were set up to be Taylor Swift’s night. She was the artist with the most-dominant, most commercially-successful release in country music, and in the entire music world overall. But Taylor didn’t even win one award on the night, not even the fan-voted Entertainer of the Year that she’s taken home the last two years from the support of her massive fan base. Taylor Swift is arguably the most-popular artist in all of music, yet she didn’t even perform at the ACM’s except in an accompaniment role with her record label’s new toy Tim McGraw. The most significant development from the 2013 ACM Awards might not be Luke Bryan’s Entertainer of the Year win or the country rap performances, but Taylor Swift’s 0-fer with the awards and lack of significant participation in the presentation.

So what is going on with Taylor Swift and country music in 2013? For years the droning, tiresome argument of whether Taylor Swift is country or not has raged on incessantly, with the obvious answer from an observance of her music being “no,” but with country radio, country awards shows, and the country media and industry welcoming Taylor and her huge fan base in with open arms. But something has changed since the release of her last album Red in October of 2012, hinting that Taylor Swift herself may be wanting rid of the rigid country format that has firmly ensconced her in the crosshairs of country criticism for years. 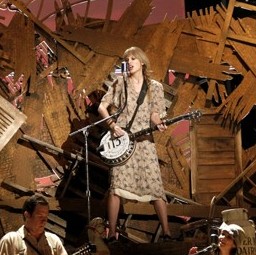 Taylor Swift did not feel the need for a solo performance at the ACM Awards, but she scored the opening performance at this year’s Grammy Awards in early February. At the Grammy Awards the year previous, Taylor Swift won two Grammy’s for her song “Mean,” arguably the most country song she’s ever cut. She also performed the song on the Grammy presentation in a very country setting with shards of old wood as her backdrop, wearing a simple country dress and playing a banjo.

At the Grammy Awards this year, one whose underlying theme was the dominance for roots music with Mumford & Sons taking home Album of the Year honors, Taylor 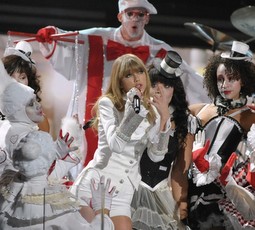 performed one of her most pop song to date–“We Are Never Ever Getting Back Together” that included the most grandiose, ultra-pop live production possible. And even though Taylor Swift didn’t bother with a solo performance at the ACM Awards that were held in Las Vegas, she’s announced she will be back in Vegas for the Billboard Music Awards in May, where she will be contributing a full performance.

And then there’s the business of all of these Taylor Swift pop singles she’s been releasing one after another to Top 40 radio, while country radio goes virtually ignored. During the production process of Taylor’s album Red, at the prodding Big Machine label head and executive producer Scott Borchetta, Taylor Swift brought in pop hit producers Max Martin and Shellback to co-write and produce songs for the album. The collaboration resulted in only three tracks, but the three most pop tracks out of Red‘s 16 total songs. And despite being a small percentage of Red‘s content, the Max Martin / Shellback songs have comprised all of the album’s first major singles–“We Are Never Ever Getting Back Together,” “I Knew You Were Trouble,” and “22.”

The tepid “Begin Again” was released to country radio, but it felt like a token afterthought to the more dominant “We Are Never Ever Getting Back Together” whose primary mix was purposely labeled “pop.” The “country” version of the song was the remix instead of the primary mix–an unusual reversal for a country artist–and was only available to radio upon request, not to consumers. 7 months into Red‘s album cycle, and country radio has yet to see a substantive single from Taylor Swift, even though the 16 tracks of the album include many songs in the same vein that Swift has found success with on country radio before.

And as to be expected, those pop songs have been massive commercial successes. “We Are Never…” has been certified triple platinum, and “I Knew You Were Trouble” quadruple platinum. And Taylor Swift is said to already be recording new material for a new album. With the overwhelming commercial success from the Max Martin / Shellback collaboration and the virtual ignoring of Red‘s more substantive, more country-palatable tracks, what are the odds of what the direction of her new material will be? Taylor does have a single with her name on it climbing the country charts, but once again it is the “Highway Don’t Care” song of Tim McGraw’s that she appears on.

Sure, as the album cycle of Taylor Swift’s Red continues to elongate, she may make a move back to the more country side of the world, but at this point, why would she? Though a wide view of Red still reveals Taylor’s propensity to be a pop star with substance, the way she’s navigated releasing the singles and handling the award show performances for the album seems to hint that she’s no longer concerned with participating, or even paying homage to either the country format that gave rise to her stardom, or the singer/songwriter depth that created not just a big fan base, but a loyal one; one that would never let a fan-voted award go by without a Taylor Swift win.

So if Taylor Swift is truly attempting to extricate herself from country, when will the country charts catch on and quit including her in their country rankings? And when will the country award shows quit nominating her? And however big of a fish Taylor Swift is, will she be gobbled up by the much bigger pop scene that doesn’t offer as much grass roots support as country? And how does Taylor’s move of not wanting to be perceived as a role model anymore factor in?

The tiresome arguments back and forth of whether Taylor Swift is country or not may soon be coming to an end, but not because one side or the other will win. It’s because Taylor Swift herself seems to be wanting to tell the world she’s no longer wants to be considered a country music artist.