Finding myself in Dallas as a refugee last Winter, and trying to figure out how to make a move to Austin for over 9 months, I burned a pretty good path between the two Texas cities. One of the few bright spots of the 3+ hour trip that I probably made a dozen times was “Willie’s Place”, a truck stop and so much more that sits at about the half way point between Big D and ATX, near Willie Nelson’s boyhood home of Abbot, in the small town of Carl’s Corner. 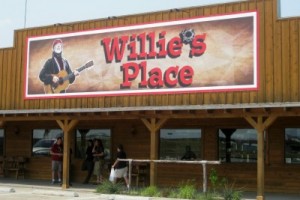 Willie’s Place was built about three years ago. Though it wasn’t very old, it was the last of a dying breed of unique places that America can boast, where commerce happens, but not at the expense of regional taste and local appeal. The only thing done there on a national scale was the broadcast of the XM/Sirius “Willies Place” programs by DJ’s Dallas Wayne and Bill Mack from a studio in the Willie Nelson theater. That’s right, this truck stop had a studio, and a theater, as well as tons of Willie memorabilia filling the walls and display cases, and a one-of-a-kind “Blue Skies” cafe. What it didn’t have was a well-recognized company logo out front, like 98% of the gas stations and truck stops in America do. It had a hand-painted sign.

I never saw a show there, never bought one of the stupid trinkets in the Willie gift shop. But every time I stopped there, I would walk past the display cases filled with gold and platinum records, pictures from the past, and other cool pieces of history. And I’d always walk down into the big theater in the back and just stand in it’s emptiness, trying to soak up the energy left over from the last live performance, and appreciate the layout, the acoustics, and the attention to detail. It’s a place Willie played many times, as did many other big name country artists. I’d also make sure to buy something on my way out the door–a drink or a snack–to cast my vote that a place like this remain standing.

I’m sure it was destined to fail. The idea was too grand, and too pure. I mean let’s face it, Willie has a history of building big and bellying up. He’s made a career, and a philosophical approach to life out of it. So when I heard that “Travel Centers of America” had bought the place on the courthouse steps earlier this month, I guess it wasn’t too much of a shock. And it’s not like I can get too much “angry-old-man-syndrome” over a place closing that didn’t even last five years. However the truck stop at Carl’s Corner has been a staple of the Texas highway culture for much longer, and the music culture too, hosting Willie’s Annual 4th of July picnic in 1987. Willie and the truck stop’s namesake, Carl Cornelius, are long-time friends and partners in the “BioWillie” biodiesel venture. 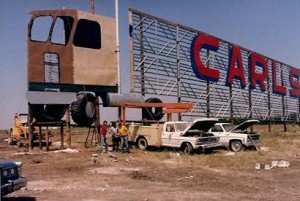 In ’87 they were expecting 80,000 for the picnic because the site would make it possible to draw from Dallas and Austin. 8,000 showed up, and Willie took a bath in red ink.

Growing up in Texas, I would always enjoy looking for the cool roadside ads between Dallas and Austin for Carl’s Corner, and then the big painted truck on top of the diesel bays with the dancing frogs, and Carl’s creepy face made out of a crescent moon that seemed to sell the backwater as some cosmopolitan hip joint. It seems to me they were already fading and falling apart even when I was growing up; like the good times and unique texture of Carl’s Corner was already fading away.

What really irked me when I read the news of the closing was the quote from Travel Centers of America spokesman Tom Liutkus when explaining how they are retrofitting the facility into a “Petro Stopping Center”.

We will have an Iron Skillet Restaurant, which truckers, year in and year out, consider the best food on the road…and the site has been pre-approved as a Dunkin’ Donuts location.

In some ways I was OK with the whole thing until I read this, and its insensitive and flippant tone, because it reminded me that Willie’s Place will now look like every other Petro Stopping Center in the country, whether it is in Ohio, New York, Florida, or California, and the propaganda about having “the best food on the road” reiterates to me that the new owners have no clue what Willie’s Place or Carl’s Corners was, or could be. Sure, turn the Blue Skies Cafe into an Iron Skillet. Take all the Willie trinkets out, and replace them with the crap every Petro station has. But why not leave the theater, make an effort to book shows there, leave some of the memorabilia on the walls for the charm? A Dunkin’ Donuts is not an incentive or even a consolation prize. It is an insult to what Willie’s Place and Carl’s Corner was. 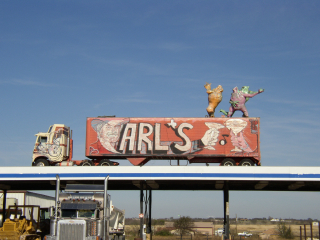 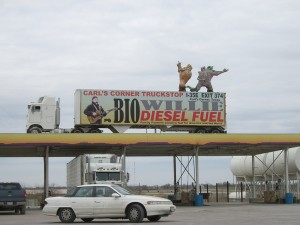 And it also makes me think of this newly-named “Willie Nelson’s Country Throwdown” tour that is going down this Summer, put on by the same folks that do the Warped tour. I smelled something fishy from the get go with this. Then last near when I was hoping to attend the Dallas stop, they canceled it and many other dates from poor pre-sales.

This year they have added Willie’s name in hopes of bringing it into the black. I wonder what odds the residents of Carl’s Corner give on that happening.

The new Petro Stopping Center at Carl’s Corner is planning to open in April, right about the time I need to make a trip up to Dallas. But I won’t be buying anything, I will be leaving something behind. I wonder if Travel Centers of America spokesman Tom Liutkus has ever heard of an upper decker.