The rise of Ryan Adams and his original band Whiskeytown amidst the burgeoning alt-country scene is the stuff of legend, or infamy depending on your perspective. And now it will be memorialized in ink in all of its debaucherous detail in a new book called Waiting to Derail: Ryan Adams and Whiskeytown, Alt-Country’s Brilliant Wreck due June 26th via Skyhorse Publishing.

Waiting To Derail covers Whiskeytown during its reign from 1997 and the release of the band’s landmark major label debut Strangers Almanac, until the band’s death in 2000 at the hands of Ryan Adams’ solo career. During the period, Whiskeytown saw only one other permanent member in fiddle player Caitlin Cary, and was a revolving door for 15+ other performers Adams either fired or forced out before lighting a torch to the entire thing and going solo, including a notorious night in Kansas City when Adams fired the entire band except for Caitlin, and they finished the run as a duo. 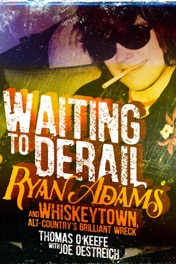 Somewhere in there was also a legendary performance on Austin City Limits, and a lot of very influential songs that would later go on to become the stuff of alt-country legend. “Waiting To Derail” is the name of one of the tracks off of Whiskeytown’s Strangers Almanac.

The story is told by one of the few individuals who lived and saw it all right beside Ryan, and was sober enough to remember it. Road manager Thomas O’Keefe came on board with Whiskeytown in 1997 around the time of Strangers Almanac. He was one of the few professionals who made it through the many personnel changes, and it was his job to keep Ryan contained enough to take the stage on a nightly basis. Thomas O’Keefe is also known as the current road manager for Weezer, and the long-time bass player for the punk band ANTiSEEN. Professional writer and author Joe Oestreich is also part of the Waiting to Derail writing team.

After Whiskeytown, Ryan Adams would become a early oughts rock icon and abandon much of the alt-country sound, earning a Grammy nomination, getting married to actress and performer Mandy Moore (and eventually divorced), and covering Taylor Swift’s album 1989 cover to cover. Love him or hate him, Ryan Adams has always kept things interesting.

Waiting to Derail: Ryan Adams and Whiskeytown, Alt-Country’s Brilliant Wreck will be available in Hardcover for $21.99, as well as ebook form. It can be pre-ordered now.