Trigger Down with Pop Country 101 Comments 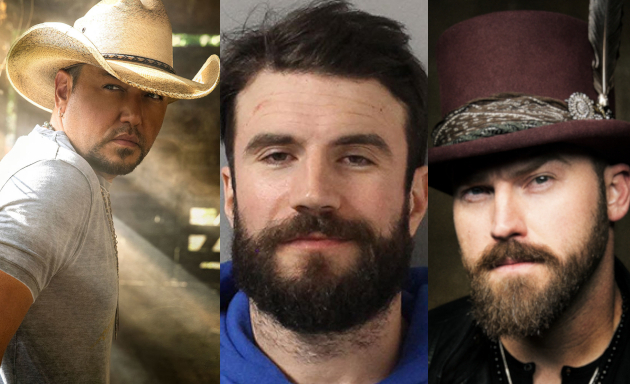 One sign that mainstream country music continues to improve is the decrease in “country” songs that were worthy of rants in 2019 compared to previous years. As the Bro-Country era continues to wane, and artists like Luke Combs dominate the airwaves, it’s offering a much more healthier alternative to the public. “Boyfriend Country” in the form of artists like Dan + Shay and Kane Brown is still pretty bad, but not objectionably offensive like some of the singles from previous years.

However there were a few exceptions in 2019, and songs worthy of taking out back to the woodshed. And don’t whine, “Hey, why don’t you focus on the good stuff instead ?!?” Heed your own advice and peep Saving Country Music’s Song of the Year Nominees if you want something better. But for now, it’s time to offer our full-throated opposition to these monstrosities misappropriated as “country” music.

Jason Aldean – “We Back”

He back, and as stove-headed as ever. Jason Aldean recently took time away from volunteering his head as a battering ram for the Southern Georgia Special Tactical Infiltration Unit to cut the songs for his new record lazily entitled ‘9.’ Hopefully like a feline’s lives, this will be Jason Aldean’s last. But for now, he’s making us suffer through this terrible single, “We Back.” If you think your IQ just dropped simply from staring at the title, wait until you hear this sucker.

If it was the early 90s, and Jason Aldean was opening for AC/DC or a born again Ozzy Osbourne, perhaps this mess would fly. But this is 2019, and supposed to be country music. Where is the Prince of Darkness to bite the head off a Jason Aldean when you need him? Chainsaw guitar chucks and Hells Bells minor chords introduce a song that is just another fist-pumping arena rock anthem about performing yet another fist-pumping arena rock anthem, which has become Aldean’s specialty, or crutch. This guy is stuck in a deeper rut than an F-250 wearing street tires trying to streak across a field of Texas black gumbo newly-tilled topsoil after four inches of fresh rain.

Oh God this sucks. At this point you can’t even look away. Like coming up on some grisly roadside accident, you know it’s going to be grotesque, horrific, and mentally scarring for the rest of your life. But even as you cover your face, the index finger raises ever so slightly, and you sneak a peek. And yes, it’s as bad as you expected, except now it’s so damn bad, it cycles back around to imparting a belly full of inadvertent mirth from just how bad it is.

“God Given” makes reference to Gucci Bags, Veyron whips (huh?), and other stuff most God-fearing country music fans have to consult Mr. Google to decipher. The chorus goes, “Gucci bag, stacks on stacks, diamonds fill up the champagne glass, Veyron whip, G5 high, you have class that you just can’t buy.” Oh but then Zac Brown devolves into downright white boy rapping. At that point the whole thing goes beyond any criticism, and you just feel bad for of this poor guy’s all-enveloping and downward-spiraling midlife crisis.

Zac Brown. Buddy! You’ve got one of the best live bands in the game, and garnered a big grassroots following over the years. Look in the mirror, cry it out, come to Papa, and just STOP.

Brantley Gilbert tries to ride the dying embers of the marijuana craze and the legitimacy of the Nelson name to renewed attention by releasing this refer ode full of indolent lyrics vomited over an obnoxious and hyperactive electronic beat. The unforgivable dumbfuckery contained in “Welcome To Hazeville” makes one palpably feel your IQ points tick down simply by being in its presence, and no, not from any contact high.

Brantley Gilbert is now in his mid 30’s, but still sporting the unbridled braggadocios machismo of a 15-year-old boy whose balls have just dropped and who just received his first hand job. Time hasn’t just passed Brantley Gilbert over, so have all the wisdom-inducing attributes of adulthood. If you want to advocate for the normalization of marijuana use, making an imbecilic stoner song that reinforces that smoking pot is nothing more than a stultifying activity of the great American meat head is not the way to go.

And you’ve gotta love that one of the themes of “Welcome to Hazeville” is “Hangin’ out with Willie,” when all Nelson was willing to contribute to the stupid song was three words lasting 1.21 seconds stuck on the very end. Willie Nelson has no idea who the fuck Brantley Gilbert is, but sure he’ll take 1/4 of the performance royalties for doing virtually nothing, dumbass.

It’s not 1996 anymore, and your stupid pot songs are about as relevant as Brantley Gilbert’s Tapout attire. They’re not edgy and hip, they’re conformist and tired. Soon marijuana will be legal everywhere, and along with alleviating the unjust incarceration of people for the possession of a plant, hopefully it also ushers in the cessation of these shitty pot songs. (read review)

Like a persistent venereal rash you think you’ve finally licked, only to experience a severe flare up right before you’re headed out on a hot date, here comes Sam Hunt and a new song screwing up the rally we’ve been enjoying in mainstream country lately. It’s been a glorious five year reprieve after this college football flunkee turned country music EDM mumble rapper lost interest in his own music faster than his bubblegum fans did, and stopped releasing new songs aside from the failed single “Downtown’s Dead” from 2018.

The premise for this song is a mess. A piece of free advice: if you do end up going back to the hometown of a suitor and want to impress your future in-laws, for the love of God, whatever you do, never, and I mean never, admit to them that you listen to Sam Hunt. He’s the face tattoo and felony conviction of music. (read review)

With the release of “Hell Right,” the entirety of Blake Shelton’s career just devolved quicker than a political discussion with your drunk and racist uncle at Thanksgiving dinner. With this song, BS has now racked up such a monumental deficit of ill will with actual country music fans, he’d have to play Hank Williams covers exclusively until 2028 to pay his debts to country music society, and even then his name will still be tantamount to a swear word to many in the country music community into eternity.

For making this “Hell Right” atrocity, I hope Blake Shelton’s penis falls off. Hearing this song played anywhere within my general vicinity makes me want to revitalize the Faces of Death movie franchise by drinking a lug of Drano as opposed to being exposed to even a fraction of a second more of this audio monstrosity. (read review)

This fat asshole should have his right to use the English language revoked for employing such a terrible pun. It’s songs like “Alcohol You Later” and meat heads like Mitchell “Bitches” Tenpenny (nicknamed for his horrible and misogynistic song “Bitches”) that have folks hating on anything associated with country music as indolent and backwards. In the case of this song, that assessment is completely justified. The only redeeming quality of “Alcohol You Later” is the fact that it flunked on the charts, not even cracking the Top 40 despite many touting Mr. Bitches as country music’s next hot thing. Hopefully his career is the next thing to tank. Mitchell “Bitches” Tenpenny gives off more rapey vibes than a Miami University football player. This song deserves to go straight to voicemail, and the number permanently blocked.