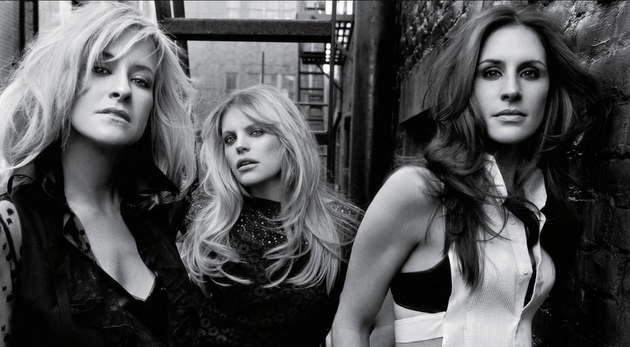 Batten down the hatches, and brushen up on your freedom of expression barbs because the most controversial and successful female band in American music history is dusting off the cobwebs and getting ready for a European tour stint that could be the precursor to a re-invasion of the United States and a relauncing of their once high-flying country music career.

The Dixie Chicks are returning to the scene-of-the-crime if you will. It was in Europe in 2003—Shepherd’s Bush Empire Theatre in England specifically—when the country trio touched off a political shit storm after Natalie Maines said, “Just so you know, we’re on the good side with y’all. We do not want this war, this violence, and we’re ashamed that the President of the United States is from Texas.”

Next thing you knew, people who had never heard of The Dixie Chicks, let alone their music, were burning piles of their CD’s in parking lots, and radio DJ’s were getting fired for simply spinning their latest single. The Dixie Chicks became the anti-poster girls for the pro-American rallying cry amidst the breakout of the Iraq War, and the songstresses got shellacked right out of country music, going from one of the highest-grossing country acts in history and selling out arenas, to receiving sympathy votes from the Grammy Awards because they careers had been so destroyed.

Meanwhile amidst the political fracas, most lost sight of the fact that regardless of their political views, country music had lost one of its most commercially-successful franchises, and one fronted by females that wrote many of their own songs, played their own instruments, and helped ensure equality for quality, traditionalism, and female acts in the country music mainstream—something the mainstream continues to struggle with today.

On Tuesday, June 16th, The Dixie Chicks announced on their website:

Superstars, renegades, innovators, heroes, villains, and moms for over a decade, the Dixie Chicks have grown from a band into a phenomenon, with over 30 million albums sold, Dixie Chicks are the biggest female band of all time in the U.S.

The Dixie Chicks have announced that they will be returning to Europe to tour in 2016. Starting in Amsterdam, the tour will then head to the UK and Ireland to play arenas in Birmingham, Manchester, London, Glasgow and will culminate in Dublin.

After the trio got “Dixie Chick’d” in 2006 amidst the release of their album Taking the Long Way, and a fairly unsuccessful tour attempt, the group unofficially broke up, with sisters Martie Maguire and Emily Robison eventually forming the Court Yard Hounds, and Natalie Maines launching a solo career. In 2013, in a Rolling Stone article that represented Maines “declaring war on Nashville,” Natalie said of country,  “I just didn’t like how blatant country music was. Nothing seemed poetic or subtle.” It seemed Maines ostensibly burned whatever bridge was left with the genre, but we’ll have to see how the European set lists materialize, and just how much non-poetic and unsubtle music is included.

Meanwhile has 13 years in any way healed the wounds opened up by The Dixie Chicks in country music and beyond? In the politically diametric world we live in today, the issue may have never been more heated. Right now there is just six announced tour dates not transpiring until April of 2016. But you can all ready hear the “rip,” and I’m not talking a fiddle. That’s the sound of whatever scab material had formed over the Dixie Chicks issue getting removed.

Can’t we all just focus on the music?