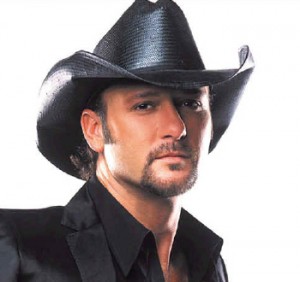 Tim McGraw has responded to an incident that happened at a concert in Atlanta on Sunday (7-13) at Aaron’s Ampitheatre at Lakewood, where after a female fan touched him multiple times, including grabbing hold of his jeans and causing a significant rip in them, Tim responded by slapping or shoving the female fan across the head. The incident has Tim McGraw in hot water with many fans for laying his hands on a woman.

Sometimes things can lose context and perspective. I reacted in an instinctive, defensive way from my perspective of what was going on.  I think it was an unfortunate situation, I think all the way around.

But it happened, it happened in a split second, it was pure instinctive reaction, I think you just got to move on.

It is one of those things that happen, nobody feels good about it, but there’s nothing that could be done about it. You are in that position, you are out there, you are vulnerable, things happen and sometimes you react. There’s nothing to be said about it.

Footage of the incident has spread across the internet on sites such as The Huffington Post and TMZ. Clearly seen in the video, a woman in the crowd reaches out to touch Tim multiple times before grabbing Tim’s jeans near his left pocket and causing a large rip. Some also discern from the grainy videos available that the woman was trying to touch Tim’s genitals. The woman either didn’t let go, or her hand gets caught on Tim’s jeans, and when he goes to pull away is when the “instinctive” slap occurred.

Tim was singing his song “Truck Yeah” as an encore performance at the time. The woman was later escorted out of the concert by a security guard.

Though the woman was clearly being aggressive and putting her hands on Tim, the question for some fans remains why Tim felt the need to slap the woman, and so aggressively, instead of waiting for security to diffuse the situation. As can be seen in the videos of the incident, security arrives very shortly afterwards. At the same time, Tim was clearly reacting to the situation, and not acting out against the woman unilaterally. A spokesperson for McGraw had said late last week about the incident, ““He instinctively swatted to try and keep them from ripping his jeans (which they succeeded at doing), and so he could get to more fans who were trying to slap hands with him before the end of the show. He didn’t know who had grabbed him and was trying to keep his pants from being torn.”

Late last week Atlanta police said that Tim McGraw would not face charges in the incident. The woman who was slapped and later detained after the incident, has not pressed charges.