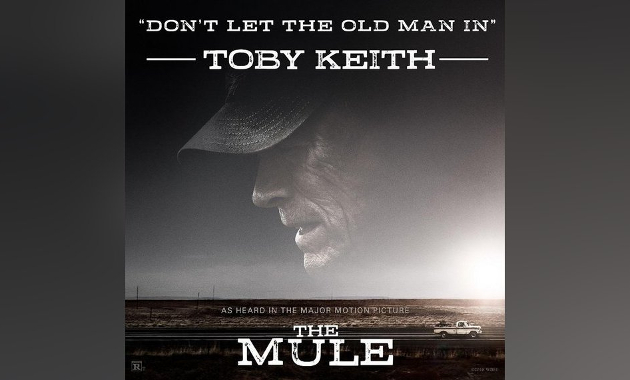 There is a lot that is inexplicable about this song, including how it came about. Two days before Clint Eastwood was to start filming on his movie The Mule—which incidentally was two days before his 88th birthday—Eastwood was golfing with Toby Keith in a charity gold tournament at Pebble Beach. Keith marveled that the elder Eastwood was still able to get about, let alone work. Eastwood said to Keith, “I just get up every morning and go out. And I don’t let the old man in.” Toby Keith knew immediately he had to write a song with that line.

Even then, there was no guarantee “Don’t Let The Old Man In” would come out well, and find a place in a movie or anywhere else. Let’s be honest, Toby Keith is no Guy Clark, though his close fans will point out he’s always written the vast majority of his own material. And like most of country music’s mainstream personalities, they’re known for their worst songs, but each record is good for an album cut or two that tends to surprise you.

Toby Keith’s last three singles have stalled outside the radio Top 40. His last “hit” was 2014’s “Drunk Americans,” which petered out at #27. In country radio terms, Toby Keith has been put out to pasture. Toby Keith cannot only expound on Clint Eastwood’s original idea, he can relate to it as a late career mainstream commercial country warhorse who’s clearly past his prime, but unable to hang it up, similar to the central character in The Mule.

Even more astounding is that the song is quite literally a demo recording. Keith went into the studio to cut the song on a day he was sick, but he wanted to get a prototype over to Clint Eastwood to be considered for the movie. Toby Keith’s raw voice, and the sparseness of the demo cut was exactly what Clint was looking for. A proper studio version was never made—it would have ruined the mood.

With country radio continuing to represent such a narrow window of sounds and artists, movies have become an important outlet for important songs. We saw this with the blockbuster remake of A Star Is Born, and the contributions of Lukas Nelson, Jason Isbell, and others. We all know that radio has little need for quality songs these days, but in another surprising twist for “Don’t Let The Old Man In,” radio showed some reception for it, letting the song hover around the Top 40 before losing its bullet this week.

As we age, our priorities and motivations change, and we accept the reality of diminishing returns for our efforts. Toby Keith must now realize it’s fool’s errand to try and keep up with the latest trends. He will always be a polarizing character, in country music and beyond for some of the songs he’s cut. But “Don’t Let The Old Man In” is something that we most all should be able to agree on as quality.