Twilight in Austin: The Passing of George Reiff and Jimmy LaFave 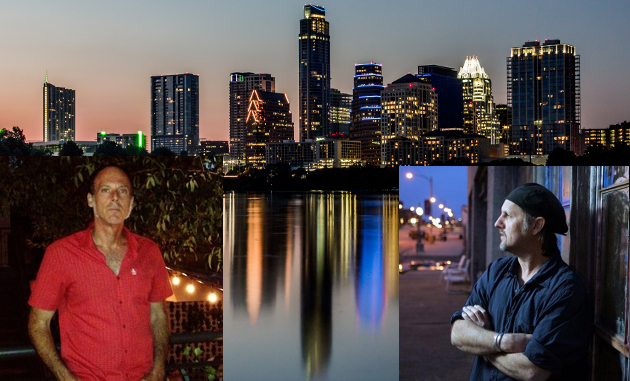 It’s like 2016 all over again, only centralized in its grief in the Live Music Capital of the World, Austin, Texas. In a span of a few hours, the city, and music, lost two titans that may not rise to the recognition of household names across America, but were seminal to the sound and influence that Austin music is known for, sending reverberations throughout American culture, and leaving a lasting impact not soon to be forgotten.

It is not a shock that either man passed. Both bass player and producer George Reiff, and songwriter and performer Jimmy LaFave had shared their terminal and terrible Cancer diagnoses with family, friends, and fans over the last months. Nonetheless, the deaths are a tragic shock to the system for a city that was already reeling from the loss of a musical identity due to dramatic growth, and a shift of priorities in the local economy. It’s not a stretch to say that as we look back on May 21st, 2017 it’s not just as the end of the road for two musical legacies, but the end of an era for Austin music.

George Reiff was the bass player who was so much more. He was a keeper of a sound that so many wanted to capture in the studio, and so many failed to do so. It was the sweat of Small Faces, and the voodoo of Tony Joe White that he was able to adhere to the tape. Joe Walsh, Ringo Starr, Ray Wylie Hubbard, Bruce Robison, Charlie Robison, The Dixie Chicks, The Court Yard Hounds, Tedeschi Trucks Band, The Band of Heathens, Lincoln Durham, Jason James, and Charlie Sexton is just a smattering of the names that George Reiff worked with over the years as the go-to bass player in Austin, TX.

At the age of 12, George Reiff was living in New York City and asked his mother for a guitar like the one Paul McCartney plays. Little did George know at the time that Paul played a bass guitar, but he fell in love with the instrument and after moving to Texas at the age of 16, playing bass became his life long pursuit. His first gig was playing with Tex-Mex star Joe “King” Carrasco.

Along with touring as a bass player and his studio work, George Reiff owned The Finishing School—an analog/digital recording studio where Ray Wylie Hubbard, Shinyribs, Lincoln Durham and others recorded albums. Reiff was also admired around Austin as a pastry chef, and was utilized as a food consultant for numerous restaurants in Austin.

Reiff was diagnosed with Stage 4 Cancer in his brain, liver, adrenal gland and right lung in late July of 2016. He shortly had surgery to remove a tumor from his brain, but the prognosis for George remained grievous. He died at MD Anderson Cancer Center in Houston Sunday (5-21) evening. George Reiff was 56-years-old.

Jimmy LaFave was known just as much as one of the pillars of Austin music as he was an important part to Oklahoma and the Red Dirt sound. Born in Wills Point, TX and raised in the Dallas suburb of Mesquite, he started early as a drummer, but quickly transitioned to a singer and songwriter where the musical legacy of Woody Guthrie would play a huge role in his career, helped along by a move to Woody’s home state of Oklahoma where LaFave attended high school in the Red Dirt stronghold of Stillwater.

For the next 30 years, Jimmy LaFave would help form Austin music into the “Live Music Capital of the World.” LaFave helped start the famed songwriter nights at Austin’s Chicago House, and started recording albums that would be the cornerstone of the Austin sound in the early and mid 90’s including Austin Skyline and Highway Trance. Later his music would embody more of his Oklahoma roots and influence in albums like Buffalo Return to the Plains and the influential Texoma from 2001, drawing a bridge between his two musical homes.

Jimmy LaFave did tremendous work preserving the legacy of Woody Guthrie in Oklahoma and beyond. He performed on Austin City Limits and made numerous appearances on NPR’s Mountain Stage while touring nationally and internationally, and gaining a wider recognition beyond the Texoma region.

In April of 2017, it was revealed that Jimmy LaFave was suffering from a rare form of Cancer, and had been fighting the illness for a year privately while never canceling a show and continuing to record songs. According to Music Road Records—a label LaFave helped form—he passed away Sunday night (5-21) surrounded by loved ones at his home. He was 61-years-old.

Both the musical legacies of George Reiff and Jimmy LaFave stand tall above the rising skyscrapers in Austin’s skyline, and will remain standing in the hearts and minds of local, national, and international fans well after the clubs and studios they once graced are long gone, while the Austin musicians of today stand on their shoulder, and try to beat back the tide until the last human-played note falls on a deaf ear on 6th Street.