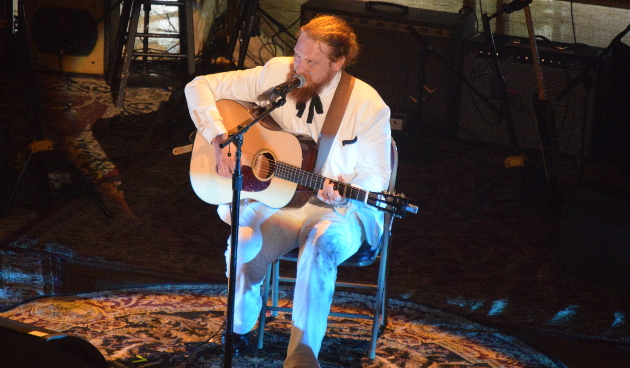 Wednesday evening (9-12), the Americana Music Association congregated for it’s 17th Annual Americana Music Awards at the Ryman Auditorium in Nashville as part of the week-long AmericanaFest. Many anticipated a lot of hot button speeches from the podium addressing the roiling political climate in the United States at the moment, and a few took took their opportunities, especially Rosanne Cash, who was receiving the Lifetime Achievement Award for Free Speech. But nobody expected Tyler Childers to deliver arguably the most pointed speech of the night.

Tyler Childers came out on the stage of the Ryman Auditorium for his performance dressed like Colonel Sanders, in a plain white suit and black ribbon tie after being introduced by fellow Kentuckian Wheeler Walker Jr. Unlike the other performers of the night, Tyler Childers didn’t take advantage of the award-winning backup band led by Buddy Miller. Instead, he decided to just perform solo and acoustic at center stage, selecting his song “Nose on the Grindstone.”

After his performance, the award for Emerging Artist of the Year was handed out by CBS journalist and television personality Anthony Mason, which Tyler Childers was up for. Anthony Mason mispronounced Tyler’s last name (pronouncing it similar to “child” as opposed to “chill-ders”), and did it again when announcing him as the winner. And then Childers took the podium to make an acceptance speech.

After saying, “Not sure how all this came about, best I can tell, y’all left your back door open, now there’s a stark raving hilljack in your living room covered in Goat’s blood,” and making reference to his mispronounced name, Tyler Childers delivered a directed and pointed diss to the term “Americana” and the way it is used for country artists. Tyler said it was a distraction from the real problems of country music.

“As a man who identifies as a country music singer, I feel Americana ain’t no part of nothin’. It is a distraction from the issues that we are facing on a bigger level as country music singers. It kind of feels like ‘Purgatory'” Tyler Childers said, making reference to the title of his most recent album.

The producer for Tyler Childers is Sturgill Simpson, who quite publicly has not been in attendance to receive his own Americana awards over the last few cycles since receiving his own Emerging Artist of the Year award in 2014, including multiple Album of the Year wins.

A full report from the 2018 Americana Music Awards.