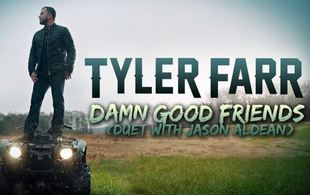 Tyler Farr is not one to shy away from saying something controversial in his songs, and I’m not talking about political messages or salty language. His 2013 single “Redneck Crazy” was considered a stalker song by many for including verbiage about driving his truck onto his ex’s lawn and whipping beer cans in her direction. Despite a theme that some saw as reprehensible, the song did quite well, hitting platinum status and peaking at #2 on the charts. For all intents and purposes, “Redneck Crazy” is Tyler Farr’s signature song.

The Chapel Hill, TN product has just released a new record called Suffer In Peace through Columbia Nashville, and it includes a duet with Jason Aldean that’s sure to be tapped as a single. In the first verse of “Damn Good Friends,” Tyler Farr (or the songwriters Brent Anderson, Chris DuBois, and Neil Medley) seem to admit to a little bit of drunk driving.

“You’re drivin’ back home down 246
You almost hit a deer and you end up in a ditch
You can’t pull forward and you can’t back out
You’re sittin’ there thinkin’ whatcha gonna do now
You’d be a little nervous if a cop showed up
‘Cause you drank a little maybe just a little too much
Waitin’ on a tow truck takes too long
It’s two in the mornin’”¦ who you gonna call?

Okay, maybe not the message your preacher or the local MADD affiliate would prefer you hear, but it’s not something overly offensive or necessarily condoning drunk driving. It does mention it though, and is yet another piece of evidence in an elongated trend in country music to give tacit approval to the illegal and dangerous behavior. Tyler Farr’s “Redneck Crazy” is not too far off this trend either, nor was Farr’s duet buddy Jason Aldean when in the super hit “Dirt Road Anthem” he famously said,

So yeah, a lot of modern country music artists like to sing about drinking and driving, and it’s probably not hard to see the knuckleheads who listen to this music emulating some of what they hear in certain circumstances. After all, that’s what modern country is all about: selling a lifestyle.

But Tyler has put his foot down about “Damn Good Friends” and it’s potential to be interpreted as a drunk driving song. And then he elected to stick that same foot squarely in his mouth.

Wait a second. So you’re saying a song with lyrics that go, “You’d be a little nervous if a cop showed up, ’cause you drank a little, maybe just a little too much” is not about driving drunk? I’m behind Tyler in saying let’s not make too much of this song, but now he’s trying to lie to us. We read the lyrics. We understand what they say and mean. So what is he trying to get away with here?

Then Tyler Farr goes on,

“Shit, I mean we all were in high school, we all drove. I drove with a pony keg in the bed in my truck with a damn hose through the sliding [window].”

Okay so what the hell is going on here now? First Tyler Farr tells us this song isn’t about driving drunk. Then in the same breath, he’s telling us we “all” drove drunk in high school, and gives his own anecdotal account of drinking from an open container while driving during his high school years. All of a sudden we’ve escalated from a rather subtle and semi-harmless lyric in a song to saying “Hey, if you’re in high school, go ahead and suck one down while you’re behind the wheel. We all did it.”

And then Tyler Farr keeps digging his hole even deeper if you can believe it, by impugning people who may have a problem with his drunk driving lyrics (that he’s completely forgotten now aren’t about drunk driving).

“Today is so censored, and you wonder why kids turned out pansies. Because everybody’s a winner. He got sixth place? Tell him to run faster. You have to learn from your mistakes  nowadays you’re not allowed to make mistakes to learn from.”

Well there you go. We should probably allow high schoolers to drive drunk so they can learn from their mistakes. Tyler Farr seems like a great guy to be doling out parenting advice or to be in a position to critique your parenting skills. I’m sure the families of the 10,076 people who died in drunk driving accidents in the United States in 2013, including 1,149 children, and the 290,000 injured would disagree, especially when the vast majority of those accidents involved drunk drivers below the age of 24.

See, now Tyler Farr has taken a mostly harmless lyric, and made me have to cite drunk driving statistics just to shut him up and actually make him think about the flippant and irresponsible comments coming out of his boneheaded mouth.

He’s right that many American’s drive drunk when in high school, and drive drunk now. Some may be inspired to do so by the words of a modern day country song. And yes, legendary country artists like George Jones and many others drove drunk too, and some even sang about it. But they were also open and honest about their demons, and were also apologetic, contrite, and embarrassed by their actions and sang not just of the party aspect, but of the consequences. Tyler Farr tries to do this in “Damn Good Friends,” but ends up swerving all over the place and plowing into the ditch.

That’s the difference between country stars of yesterday and today. Tyler uses his drunk driving to let you know just what a badass he is and how you’re a “pansy” for having a problem with it.

This dude couldn’t come across as any more unlikable. The whole Rolling Stone interview was all about him showing off, and portraying himself as a badass so people buy into the persona of his music, of which he only co-wrote three of the eleven songs on his new record. It’s a shame that many of the mainstream country artists who actually offer a little bit of contrast from Bro-Country and the Sam Hunt stuff feel the need to convey these bellicose personas.

I take only tacit exception with the opening verse of Tyler Farr’s “Damn Good Friends.” But his explanation is about as offensive as they come.