If come July you’ll be looking to get out of the summer heat, and don’t mind trekking to darn near the Canadian border, the inaugural Under The Big Sky Festival has assembled a pretty impressive lineup that includes Dwight Yoakam, Cody Jinks, Nathaniel Rateliff and the Night Sweats, Amanda Shires, Nikki Lane, Shooter Jennings, and many others. It may not be easy to get to, but whomever is curating this thing definitely has good taste in country and Americana music, and the ability to land Dwight and Jinks, who have priced themselves out of many other independent festivals recently.

Set to take place July 13th and 14th near Whitefish, Montana just 30 miles from Glacier National Park, it will be located on the 350-acre Big Mountain Ranch with 180-degree views of the Whitefish Ski Resort’s mountains. Performances over the two days will be on two separate stages in naturally-formed amphitheaters. The event will also feature a rough stock rodeo produced by Brash Rodeo, as well as trail riding opportunities in and around the property.

Children under 6 are free, and VIP packages will be available. Food and beverages will be a curated collaboration between Whitefish restaurateur Pat Carloss, and Best Beverage Catering who provides catering for Coachella, Stagecoach, and other major festivals. For more information on Under The Big Sky Festival, visit underthebigskyfest.com . 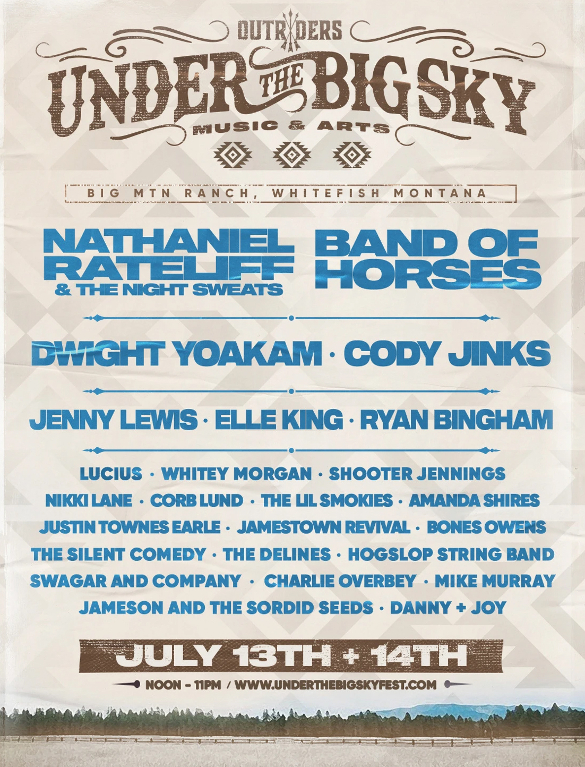