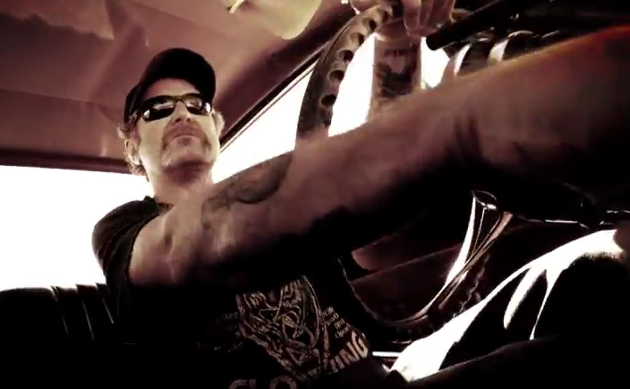 Make way you mamby pambys for the steel-jawed and fully-cocked musical madness coming at you like a face full of claws from the unhinged and wild-eyed “Dirty Ol’ One Man Band” known as Scott H. Biram. That grit in your eyes and those shotgun pellets you’re spitting out is how you know this is the real deal, hard-earned, dirty and awful truth sputtering with heartbreak and bad attitude like a rusty rig running off of fumes and dregs, but still packing enough mean-eyed moxie to barrel you over like a kick to the teeth.

Aww, this music’s too damn ugly for you? Well I think Luke Bryan just released a new song you whiny soul suckers, so get back suckling on that sweet corporate country teat while the rest of us bang our heads ’till our ears bleed. “Trainwrecker” is the type of nasty shit that Scott H. Biram has been beating out of old hollow-body guitars for some 17 years now, mixing Texas blues and country heartache with a potent dose of punk attitude. Scott once survived a head on collision with a 16-wheel semi tractor trailer and had his guts shoveled off the Texas asphalt and shoved back in him, so do you really want to swap scars and war stories with this ornery son-of-a-bitch?

“Trainwrecker” comes from Scott Biram’s most recent released called The Bad Testament via the devil-may-care renegade label Bloodshot Records bred on the dirty streets of Chicago. Biram’s earned such respect from the deep blues community and beyond in recent years that The Bad Testament charted #3 on the Billboard Blues Chart upon debut. But don’t think that’ll make Scott to go all soft on our asses. All you’ve got to do is get one good whiff of his new video for “Trainwrecker” to know Biram would rather go down going full speed and careening out-of-control with a blown head gasket spewing smoke than peeter out with a whimper.

So put your big boy pants on and give it an spin, or otherwise duck and cover because the shit is about to get real.