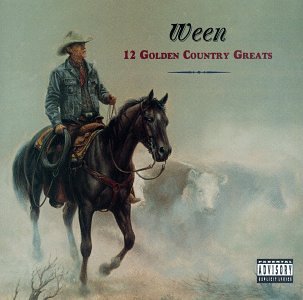 If the unusual and offbeat of the country music realm is something you love to delve into—if the Roger Miller’s, the Shel Silverstein’s, and the John Hartford’s hold a special sway on your heart, and something just a little strange, unexpected, and funny is where you find enjoyable wrinkles in the forgotten shadows of country music’s otherwise explored reaches, then this album from the experimental and absurd rock band Ween made in 1996 just might be one of the coolest things you’ll ever hear from country music’s curious underbelly, if not for the entertainment factor, then for the sheer wonder of how something like this ever got made.

The case of a rock band making a straight laced country album is not a unique occurrence in itself. In the late 90’s, this was sort of a fad. The West Coast punk band The Supersuckers released the country album Must’ve Been High in ’97 and Social Distortion’s Mike Ness released Cheating on Solitaire in ’99. But before either of those, the two-man group Ween convinced their major label Elektra Records to fund a recording trip down to Nashville, TN to put together a country record in the classic, “golden” form. This was not the case of a rock band swapping out a country music alter ego. Ween’s 12 Golden Country Greats took the same approach to making country music as artists had for generations. They wrote the songs, went into the studio, and hired some of the best singers and pickers in the business to back them up.

Recorded at Owen Bradley’s legendary Bradley’s Barn studio at his farm just outside of Nashville, 12 Golden Country Greats featured The Jordanaires as backup chorus singers, Country Music Hall of Famer Hargus “Pig” Robbins on piano, Nashville A-Team member Buddy Spicher on fiddle and mandolin, Charlie McCoy on banjo and harmonica and a host of other instruments including Tuba, drummer Buddy Harman, and a stable of other notable Nashville musicians who at the time may have been considered past their prime to some in Nashville. However to Ween, they were perfect.

But you better not roll up to 12 Golden Country Greats expecting a completely straightforward and wholesome country music good time. Though there are some songs on this album that very much fit that model and any humor and subversion is so well hidden or non-existent you might as well be listening to country radio in 1966, Ween makes their own mark on the country experience by being offbeat, to downright ribald in places. The variety on the album is wicked, and you have no idea what to expect next.

One of the factors in making 12 Golden Country Greats timeless is that you probably couldn’t make a record like this today. Some of the players have since passed away, and some of the songs would never pass the censors of a major label in this politically correct world.

Songs like “You Were The Fool,” “I’m Holding You,” “Powder Blue,” and “Pretty Girl” veil their absurdity so deftly, you can listen to them as Ween being gads, or as good old country music. “I Don’t Want To Leave You On The Farm” darn near holds up against any given country song of the era and can stand alone from this album as a serious country music contribution. But then you have songs like the absolutely ridiculous and lewd “Piss Up A Rope”—probably the album’s signature song, whose salty language has been busting ribs for years. “Mr. Richard Smoker” is more of a jazzy tune, and leaves little to the imagination in describing a homosexual night lifer and his conquests.

Adding to the layers of absurdity is the fact that 12 Golden Country Greats only contains 10 songs. There were two other recordings during the Bradley’s Barn Ween sessions—a tribute to Jerry Garcia (who died near the recording period) called “So Long, Jerry” and another song called “Sweet Texas Fire,” both of which eventually surfaced on the flip sides of 7-inch’s. Another song that did make it, “Powder Blue,” originally ended in an archived audio rant from Muhammad Ali. Due to licensing issues, the Ali audio was never supposed to appear on the song, but in a mix up, Elektra printed the first batch of albums with Ali included. In later editions the song ends abruptly at the 3:14 mark. At one point Ween assembled many of the album’s session players in a backing band called The Shit Creek Boys and took them out on tour.

The legacy Ween’s 12 Golden Country Greats has left probably depends on who you ask. It is one of those albums that you’re either in the know about and it looms quite large in not just your country music ethos but in your entire music world, or you’ve never heard of it, or would never get it. It takes a certain amount of an unsettled frame of mind to really enjoy the album in its proper context. But what has allowed it to withstand the test of time is that there’s nothing else like it, and despite all the absurdity, it was still made from a sincere love for the classic sounds of country music’s golden era.